Every year thousands of rock and roll devotees visit the grave of Jim Morrison in Paris and the “Imagine” circle dedicated to John Lennon in New York City’s Central Park. But writers tend to set off on a different kind of pilgrimage—to the former dwelling places of literary icons. The idea of home and its relation to imagination have long haunted readers and writers alike—Elizabeth Bishop writes in a late poem, “I liked the place; I liked the idea of the place.” And that idea of the place continues to draw visitors to the preserved homes of celebrated writers such as Emily Dickinson, Zora Neale Hurston, and Walt Whitman, all of which are featured on the new Web site Writershouses.com. 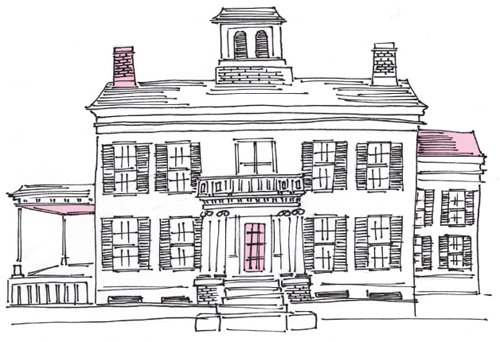 Launched last July by writer A. N. Devers to chronicle the pursuit and experience of literary pilgrimage, the site is an ever-expanding guide to houses in the United States (plans are in place to develop international listings as well), featuring images, contact information, hours, and guest books. “Writers often do a complicated dance around sitting down and writing,” says Devers about why she started the project. “We are obsessed with other writers’ processes and behaviors—with a writer’s space: The room, the desk, the tools are all a part of the equation. Seeing the place where a successful author created her work can be encouraging and grounding. The writer’s space is proof it can be done.”

The site’s blog-style main page includes Devers’s personal accounts of trips to literary landmarks, with images of houses and ephemera (a letter attesting to the authenticity of J. D. Salinger’s toilet, for example, and a photo of a slightly unsettling rug crafted by Edward Gorey). This year she intends to roll out interviews with contemporary authors in their homes, book reviews of literary biographies, and a monthly roundup of events taking place at writers’ houses. A new suggestion-box feature is also slated to go up, which will solicit basic house information and photos to help expand the directory. “I think this is a great way to crowdsource locations for some of the more far-flung houses,” says Devers. “My goal is to provide information about any house open to the public in the world.”

A guest-curated area of the site presents, in the form of literary postcards, stories and photographs from the travels and residencies of writers in the field, including novelist Andrea Seigel, who rented the servants quarters of Zane Grey’s estate in Altadena, California; novelist Ivy Pochoda, who lived in James Merrill’s Stonington, Connecticut, home; and fiction writer and essayist Susan Scarf Merrell, who discusses Shirley Jackson’s houses in Bennington, Vermont. On deck is Louisa May Alcott biographer Susan Cheever, who will write about Alcott’s Orchard House in Concord, Massachusetts. Devers welcomes essay submissions from pilgrim writers, as well as from staff members of literary historic sites.

One contributor, novelist Austin Ratner, writes about visiting, during his honeymoon, the Martello tower at Sandycove, just outside Dublin, both a site and a subject of James Joyce’s writing. “The tower had a romantic austerity about it,” Ratner says of the place where Joyce spent several nights and where he set the opening of Ulysses. “What was missing from the place, however, was that inner life that Joyce had created in connection with it, and that was not to be found among the Martello stones but back in my hotel room in the pages of Ulysses. The tower needed Joyce more than Joyce needed it.”

The range of emotional experiences that writers and readers have upon encountering literary destinations has recently become the subject of an essay collection by scholar Anne Trubek. In A Skeptic’s Guide to Writers’ Houses, published last October by University of Pennsylvania Press, Trubek explores the devotional phenomenon of literary pilgrimage and considers the melancholy aspect of attempting to access something “gone and irrevocable” in a writer’s former dwelling place. “I traveled to dozens of writers’ houses,” says Trubek. “I think many, particularly young, writers go to glean some advice or tips about how to write, whether it has to do with the setup of an office or the accounts of an author’s daily schedule. Or they might go—as one young writer I met at the Hemingway house in Key West, Florida, recounted—to get inspired, to be in the presence of literary greatness. The literary output itself didn’t matter to him: He did not like or read Hemingway.”

In the course of writing the book, a travelogue that also offers biographical notes on figures such as Ralph Waldo Emerson, Langston Hughes, and Mark Twain, Trubek extensively researched the houses’ preservation histories and their surrounding communities, interviewing curators and visitors as well. Her destinations include the tiny museum that was Walt Whitman’s final home in Camden, New Jersey, furnished with objects intended to create an image of the poet’s typical day, where Trubek fails to discover the “moment of creation” that some visitors seek in a writer’s former haunt. “Literary works create imaginary places and aesthetic experiences; authors homes are furnished with mundane material objects,” she writes. “I will never find Whitman or my favorite characters within these houses.” Later, a visit to lesser-known poet Paul Laurence Dunbar’s home in Dayton, Ohio, sparks a different reaction, due in part to an engrossing tour given by the site manager. “There is purpose here precisely because [it honors] the overlooked,” Trubek writes. “Houses are not, by definition, monuments. They are small, private places fit for someone…[who is] becoming ever more private.”

Trubek’s take on writers’ houses ultimately arrives at their subtle role in the fluid narrative of American literary history. “Writers’ house museums are fictions and we the visitors their readers,” she writes. “The houses, like books, are re-created in our imaginations, and once inside we can experience them any way we choose.”

For readers and writers interested in making those fictions a reality, Trubek’s book, which includes a list of seventy-three houses in the United States that are open to visitors, and Devers’s expanding Web site offer an informative first step in the literary pilgrimage.