When I walked into Women & Children First, the feminist bookstore that Linda Bubon and her business partner, Ann Christophersen, founded more than thirty years ago, the overriding feeling I experienced was one of warmth. And it wasn't because Chicago was having a late-winter snowstorm that afternoon. From the eclectic array of books stacked on tables, to the casualness of the blond wood bookcases, to the handwritten recommendations from staff below favorite books on the shelves, everything feels personalized; an atmosphere of welcome permeates the place. 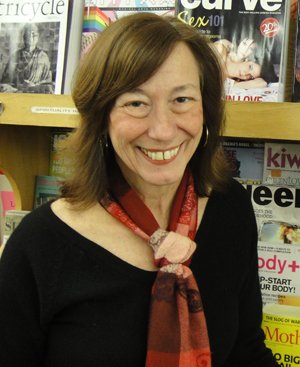 In the back of the store, a painted sign showing an open book with a child peering over the top hangs from the ceiling, indicating the children's section. Not far away, a similar sign, this one of a rainbow with an arrow below it, points toward the GLBTQ section. Despite these signs—not to mention the name of the store itself—Women & Children First carries more than books for women and, well, children. The literature section stretches down one wall; there are stacks of photography collections; books on writing fill an entire bookcase; and disciplines as diverse as cooking and psychology have healthy offerings. Though conceived as a feminist bookstore three decades ago, since moving in 1990 to its current location in the Andersonville neighborhood (an area originally home to a large population of Swedish immigrants in the mid-nineteenth century that has since evolved into a multiethnic community, and one with an equally diverse range of locally owned businesses such as Middle Eastern cafés, an Algerian crepe house, and, of course, a Swedish bakery), Women & Children First has become as much a neighborhood shop as a specialty store. And because the area has become popular with families and young professionals, the clientele is just as likely to be made up of men as women.

Still, books related to women and women's issues—whether health, politics, gender and sexuality, literature, criticism, childrearing, or biography—are clearly the store's focus. Such lauded authors as Maya Angelou, Alice Walker, Gloria Steinem, Annie Leibovitz, and Hillary Rodham Clinton have all read here. Many now-famous writers such as Sandra Cisneros, Ana Castillo, Julia Alvarez, Margot Livesey, and Jane Hamilton got their start at this store. Needless to say, Women & Children First has a devoted audience for its events, and many who attend are well-known writers themselves. So on any given night you'll be as likely to be sitting next to authors such as Elizabeth Berg, Carol Anshaw, Rosellen Brown, Sara Paretsky, Audrey Niffenegger, Aleksandar Hemon, or Nami Mun as hearing them speak from the podium.

Like co-owner Bubon, Women & Children First doesn't take itself or its mission too seriously, despite its long history and literary laurels. Twinkle lights hang in the front windows facing Clark Street; there are jewelry displays around the front counter; and tacked to the community bulletin board are flyers for both theater performances and burlesque shows. When I met Bubon, she was wearing a simple, black, scoop-neck sweater and a subtle, patterned scarf in shades of red, orange, and cream. (She also wore Ugg boots, which she unabashedly raved about for their comfort.) Because Christophersen had to be out of town during my visit, Bubon took me around the store herself—not that I needed much of a tour. Women & Children First is only 3,500 square feet in area, most of which is one large open room. Still, the store carries more than twenty thousand books, as well as journals, cards, and gifts. And perhaps it is this combination that adds to its coziness.

But nothing captures the laid-back feel and philosophy of the bookstore better than the wooden kitchen table that sits in the back, near the children's section. Around it are four unmatched wooden chairs. Bubon brought us here for the interview, and it seems a perfect example of the spirit of openness that pervades this place. Several times during our conversation customers wandered over to chat with her and I was generously introduced. And more than once Bubon excused herself politely to help a nearby child pull down a book he couldn't reach. But never did these interactions feel like interruptions, nor did they ever change the course of our conversation. Rather, it felt as though I was simply a part of the ebb and flow of a normal day at Women & Children First. Nothing could have made me feel more welcome.

When did you meet Christophersen?
We met in graduate school. We were both getting a master's degree in literature, and we became very good friends.

Was that here in Chicago?
Yes, at the University of Illinois. Our class and the one just above us had a lot of great writers—James McManus, Maxine Chernoff, Paul Hoover. It was a very fertile atmosphere. So as we were finishing the program, Ann and I started talking about opening a business together, and the logical choice was a bookstore. There was only one local chain at the time, Kroch's & Brentano's, and there were probably sixty or seventy wonderful independent bookstores in the city and the suburbs of Chicago.

That many?
Yeah. There were a lot of independent bookstores. It was a really great environment for booksellers. I mean, we all thought of ourselves as competing with one another, but really there were enough readers to go around. By the mid-1980s, however, we were feeling crowded—after five years we had outgrown that first place. So we moved to a larger store, two blocks away, at Halsted and Armitage.

Did you decide from the beginning that you wanted to specialize in books for women and children?
Yes. It was what was in our hearts, and in our politics, to do. We were part of an academic discussion group made up of feminist teachers from all the nearby universities that met at the Newberry Library. Two of our teachers were part of this group and they had asked us to join as grad students. They were discussing Nancy Chodorow, whose book The Reproduction of Mothering had just come out. Also Rubyfruit Jungle. I was like, "Oh, my goodness!" because I had never read any lesbian literature, and here was this group of academics discussing it. They discussed Marge Piercy and Tillie Olsen. These were writers whom, when I went looking for them at places like Kroch's & Brentano's or Barbara's Bookstore, I wasn't finding. Similarly, as an academic, I knew how much Virginia Woolf had written. Yet I would look for Virginia Woolf and there would only be To the Lighthouse. Maybe Mrs. Dalloway. Or A Writer's Diary. But we envisioned a store where everything that was in print by Virginia Woolf could be there. And everything by outsider writers like Tillie Olsen or Rita Mae Brown would be there.

I started going to W&CF when the store was located at Halsted and Armitage. I was newly "out" and I was very shy about going to the store or attracting any attention to myself, but I wanted to find books by Lesbian writers, about Lesbian characters. I found so many books there! When I heard that the store was moving to Clark Street, I was overjoyed, since I lived closer to that location! When the store re-located, I made a point of spending a couple Saturdays a month there, looking for new books, reading the ads on the bulletin board and collecting the week's newspapers which targeted the LGBT community. I loved seeing the growth of both the store and the inventory! I introduced friends to the store and they would tell me about their trips there, what they bought or that they saw someone they knew in there. In 2007, I retired and moved to Colorado, and one of the things I miss about Chicago is W&CF! I live in a tiny town with no bookstores. What was I thinking? Good thing I can order online. Linda Bubon might not remember this, but she and I played pool on the same team (Lost & Found) one year. I want to thank Ms. Bubon and Ms. Christophersen for taking the risks they took so many years ago, so that the LGBT and feminist community could be so well-served. That they continue to insist on excellence and being true to themselves, their vision and their wish to serve the community is a gift to us all. Gayle Teller, Mesa, CO

I haven't been to this bookstore, but have seen it's presence on the internet and thought it would be a lovely store to see. Sounds a bit like A Room of One's Own in Madison, WI - a wonderful little store I spent a few minutes in when I was on book tour two years ago.

I love this bookstore! Not only for the fabulous selection of books, but also for their inspiring reading series. I make a point of visiting every time I come through Chicago.

For the third installment of our ongoing series of interviews, Inside Indie Bookstores, Jeremiah Chamberlin travelled to Chicago to speak with Linda Bubon, who, along with Ann Christophersen, owns Women & Children First.
X