Without even needing this evidence.
Right. By the time we were into the case we had several pro bono attorneys. And many of them were criminal [defense] attorneys. They looked at the facts and they said, "They don't need this. We've had less evidence for some of our clients who got put away." At about the same time—midway through the case—a couple of local young filmmakers asked us if they could do a documentary. So they followed us around for the second year of the case. But when the case was over and they'd finished their piece and were trying to sell it to PBS, they found out that they needed to get eight or nine more minutes of film. So they came to us and said, "We would like to have an aftermath panel with all the parties. It would be you, Dan, the lead officer, their attorney, and someone from the University of Denver law school who would moderate the panel. We'll do it at the Press Club. Would you be willing to do that?" So we were all set to go when Dan got a phone call from the public defender who had represented the guy who was accused and convicted of making the meth. He asked Dan to confirm what was in the package.

Because of course you had to have known what the book was this whole time.
But the guy who'd been put in prison hadn't known anything about this case while it was going on. He had no idea. They'd arrested him after the case was over. But evidently he'd told his public defender what had been in the package, and when the police had finally interviewed him he'd also told them. But they didn't believe him, evidently.

So the public defender said to Dan, "Would you confirm the title?" And Dan said, "Well, we could if we had permission from the individual. But it's not something we really want to do. We feel that this is private. He can say what the book was if he wants to, but in any case we would certainly need written permission." So the next thing you know a letter is delivered from the guy in prison, with his permission to reveal the contents of the package.

After the phone call, Dan said to me, "Maybe we should do that." And I said, "No! We spent two years of our lives on this thing. We're not going to make more hay out of this." Meanwhile, the filmmakers have set up the panel. You can actually see this film if you ever care to. They play it nearly every September during Banned Book Week.

So there we are on the panel. A whole bunch of people are in attendance. It's a small room at the Denver Press Club, but it's filled up. And when we get to the question-and-answer period, who should be in the audience but the public defender.... [Raises eyebrows.] He stands up, identifies himself as the attorney for the convicted individual, and he says—I'm paraphrasing here—"Mr. Recht, you have received a letter from my client giving you permission to identify what was in the package, haven't you?" Dan says, "Yes." "And would you do so?" And Dan says, "We would never identify what was in the package unless we had explicit permission from whoever owned the package, whoever bought the book." And the public defender says, "But you have that permission, don't you?" And Dan says, "Yes, but again I want you to know that we would certainly never put this information out there unless we had permission." "Well?" the public defender asks. "Okay, then," Dan finally says. "The book was on Japanese calligraphy."

That's amazing.
It's true. The guy was a tattoo artist. [Smiles.]

Let's talk a bit about the future next. You can't open a bookselling-related periodical and not see at least one story about e-readers and Kindles and digital bookselling. Do you have any intention of selling digital books?
I think it's very apropos of the times. We do sell digital downloads on our Web site. We can sell them for most of the e-readers except the Kindle, which is proprietary to Amazon. There are many issues with regard to books being produced in this way, but as far as independent stores' being competitive with Amazon it's a pricing issue. Though we can sell these digital downloads, we can't really be competitive because Amazon is selling below cost. We just don't have the financial wherewithal to sustain that.

I've always been a firm believer that information will move in the most user-friendly manner possible. And when mass-market paperbacks became a big deal in the United States after World War II, there were a number of people who said that this was going to be the end of good publishing. That didn't happen. Times will change, and we do need to face the challenges that are before us and still maintain our care and our community service to the people who are so important to us—the writers and the readers. And I think that ink on paper between boards, well done, will always be, at least in the foreseeable future, part of our social construct. Reading a book, as you well know, is more than a cerebral experience—it's a physical experience. And while an e-reader has its place in many people's lives, there's nothing like holding a book and seeing the pages turn in a way that is not electronic. [Laughter.]

When I think of a book, there are many forms that it takes. When we talk about fine literature and poetry and use that as an example, the soul of that book is its content and the message of the author. So that's first. What holds that message—whether it is a computer, ink on paper, or an iPad or a Kindle or a Nook or a Sony Reader—has more significance in some circumstances than others. I would prefer to read my fiction and a great deal of my nonfiction in ink on paper. If I'm on an airplane and going on vacation, I might choose something else. But if it's a cookbook, I need pictures. I want to be able to get a little of what I'm cooking on the page. [Laughter.] So, while it may be mixing metaphors a bit, you're not going to stand in the way of the freight train of change. However, I think it's really important to be up front laying the track as best you can in the right direction for the benefit of the readers who we serve.

Finally, what is your favorite thing about the day-to-day of bookselling?
When I'm walking through the sales floor and a little kid goes up to the shelf and spots a book and says, "Oh, wow! You've got that book!" To know you've played some small role in making that happen—there's nothing like it. I've been in this business a long time and I still get chills down my back when things like this occur.

Just this morning we received a letter from a young girl—a ten-year-old fifth grader—who wrote a poem about books, and loving to be in this store, and the cushy chairs, and her favorite step that she likes to sit on. "Books, books, books, books," she wrote. "Read, read, read, read." That's what she said. [Smiles.] It is a remarkable profession, trade, and way of life. 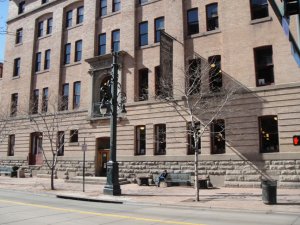