What do you think people are most surprised to learn about independent bookselling?
I think they're surprised to know how hard it is. I think everybody—or the uneducated person who doesn't know much about the business—thinks that as a bookseller you sit in a store, read books, and when someone comes in you have a nice conversation and then recommend and sell some things to that person. That you have a stock of books you believe in and know intimately. That you wear patches on the elbows of your sport jacket, and there's a cat somewhere in the window, and there's a fire burning in a fireplace, and there's the smell of coffee and all that. That it's a very relaxed and low-key kind of thing. The reality is that it's extremely intense, whether it's a small store or a huge store. You're always pushing the rock up the hill, and it's relentless, and an awful lot of people get ground down by it. That's why you see stores close with the frequency they have. People give five or ten years of their lives and realize it's not going anywhere. And that's hard. It's hard to be in an industry that takes so many casualties and that much stress.

The good news is you still get to work with books. And you get to work with people who really love books, both as customers and as staff. I'm sure people who love hardware love their hardware, but, you know, I wouldn't. There's a high level of gratification. I was trying to calculate how many books I had sold during my life under the Powell's name. I'd like to think it's coming close to a hundred million. You know, in chaos theory there's this idea that a butterfly flapping its wings on one side of the globe can create a storm in Africa. Well, what about a hundred million butterfly wings? What has it done? You don't know. People hardly ever tell you, "I read a book and it changed my life." Most books are probably sold for entertainment, some are sold for information, and some are sold for inspiration. Certainly some are sold for all three at the same time. But I say to myself, "Well, at least when you're reading a book it's hard to rob a bank." I like to think that some of those books have had a positive impact on people's lives.

Jeremiah Chamberlin teaches writing at the University of Michigan in Ann Arbor. He is also the associate editor of the online journal Fiction Writers Review.

INSIDE POWELL'S BOOKS
How many book sales are you processing a day as online orders?
About 2,500. Upward to 3,000. It spikes at Christmas, and it spikes when the school year starts, but otherwise it's fairly steady.

How many books do you have in your warehouse for online sales?
About 380,000 in [the main] warehouse, and then there's about 125,000 in another warehouse.

And how many books do you carry in your stores?
About a million in the flagship store, and probably another six hundred thousand scattered around the other stores. And then we support another two million in Europe. So online we support upward of 4.5 million titles.

How do you determine the price you pay for used books that you buy from online customers? Do you use an algorithm, or is there a person who works on each order?
No, it's an algorithm. We have several million books in our database to match against, so we just take a percent of either the imprint price or the in-store resale price and pay that amount. 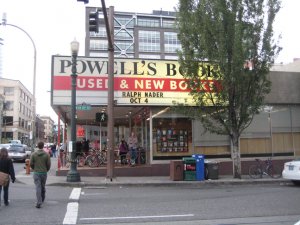