Her Legacy in Stone

After Ruth Stone’s death in 2011, the poet’s will revealed a curious directive: that her house in the woods of Goshen, Vermont, be used “as a center for poetry, creative writing, and other artistic endeavors.” Unfortunately, she left no money to maintain the home, a decaying 1830s farmhouse crammed with books amid the wilderness of the Green Mountain National Forest. She was buried on the property in an unmarked grave; there wasn’t enough money in her estate for a gravestone, much less the gut-renovation necessary to make the house livable again. 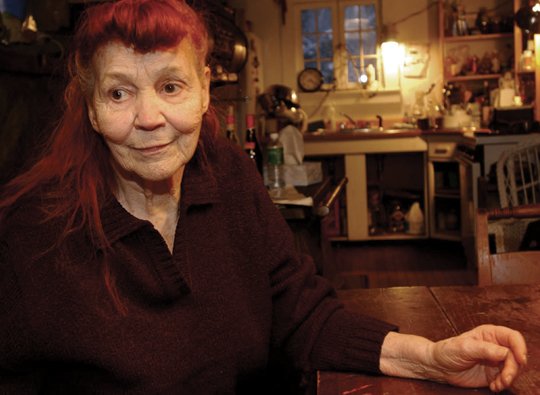 But the lack of funds seemed like an exciting challenge to her granddaughter, Brooklyn poet and visual artist Bianca Stone, who is currently spearheading an effort to transform her grandmother’s home into a writers center and residency. She plans to develop an informal school where visiting poets-in-residence will lead workshops and master classes for resident students and locals, where poets will write and give readings, and where writers and other artists will find the space and collaborative alchemy to channel their best work.

“The MFA workshop formula didn’t generate the kind of poems I wanted to write,” says Stone of her own experience. “I want this to be open to all artists, exploring the visual arts and multimedia projects as well as writing. That’s what I find so inspiring.” Stone plans for the center to open in 2014.

As a child Stone often stayed with her grandmother, who published thirteen books of poetry over her lifetime, including In the Next Galaxy (Copper Canyon Press, 2002), for which she won the National Book Award at age eighty-seven. Poets such as Richard Wilbur, Galway Kinnell, Sharon Olds, Sandra Gilbert, and Robert Bly often hung around the house, and Stone considers the convivial, unfussy atmosphere vital to her formation as a poet.

“My grandma’s the reason I’m a writer, and the reason my mom is, too,” she says. (Abigail Stone, Bianca’s mother and the youngest of Ruth’s three daughters, is a novelist; Bianca is the author of several chapbooks, and also provided illustrations for Anne Carson’s Antigonick, published by New Directions in 2012. Her first full-length collection will be published by Tin House Books in 2014.)

The physical elements of the house—the peeling white clapboard, the two screened porches, the porcelain claw-foot tub, the wood heap and brook out back—also lend the property a romantic quality that Stone finds conducive to creativity.

The house was granted National Historic Landmark status in 2010. Earlier this year, Stone and four others, including poets Chard deNiord and Ben Pease, Stone’s fiancé, established the Ruth Stone Foundation (www.ruthstonefoundation.org) in order to raise money for the project. (Until the foundation’s tax-deductible status goes into effect, Fractured Atlas, a nonprofit that provides business services for independent arts organizations, is accepting donations on the family’s behalf.) Restoring the house, a project the team is calling the Next Galaxy Poetry Initiative, will require about five hundred thousand dollars, but the future looks promising: Using the crowdfunding site RocketHub, in June the foundation raised its initial goal of fifteen thousand dollars, the amount necessary to get the project off the ground.

Stone hopes that another source of funding will be Ruth Stone’s poetry itself. While sales of the poet’s works don’t currently bring in significant revenue, the family plans to release compilations of her published and unpublished poetry, as well as her correspondence with her husband Walter, a poet who committed suicide in 1959. Additionally, Stone and her crew plan to use an old letterpress discovered in the basement of the house for printing chapbooks and broadsides. And once the house reopens as a residency, tuition for workshops and master classes could help keep the lights on.

Before renovations can begin, Stone needs to finish a massive cleanup. “Going there is like stepping into some weird, Proustian dream,” she says. Cataloguing her grandmother’s profusion of books—which will be organized and maintained as a library for the center—has proven to be a herculean labor, due not only to the patina of dirt and dust they have accumulated, but also to Ruth’s propensity to write inside her books: Stone often stumbles upon her grandmother’s notes, rants, and early drafts of poems scribbled in the margins.

But the process of cleaning and cataloguing has also been enriching for Stone: Exploring Ruth’s library of female writers—Denise Levertov, Adrienne Rich, Muriel Rukeyser, Elizabeth Bishop, and Emily Dickinson, to name a few—has, she says, been particularly valuable. And discovering a draft of a successful poem inside a book reminds Stone of how important the house and the books were to her grandmother—a legacy that, through the project, she hopes to pass on to other writers and artists looking for an inspiring and creative space.

“She was afraid of letting the house go to other people,” Stone says. “She wanted it to live on.”

Jonathan Vatner is a fiction writer living in Brooklyn, New York. He is the staff writer for Hue, the alumni magazine of the Fashion Institute of Technology.