South Korean author Han Kang has won the Man Booker International Prize for her novel The Vegetarian. The £50,000 prize, announced on Monday at a ceremony in London, will be split between the author and her translator, Deborah Smith. This is the first year that the prize was given for a single work of fiction, and was open to writers of any language whose books have been translated into English.

Han Kang beat out an impressive and diverse shortlist for the prize, which included Italian author Elena Ferrante for The Story of the Lost Child, the fourth and final volume of her Neapolitan Novels; José Eduardo Agualusa of Angola for A General Theory of Oblivion, which was written in Portuguese; Turkish Nobel laureate Orhan Pamuk for A Strangeness in My Mind; Robert Seethaler of Austria for A Whole Life; and Yan Lianke of China for The Four Books. 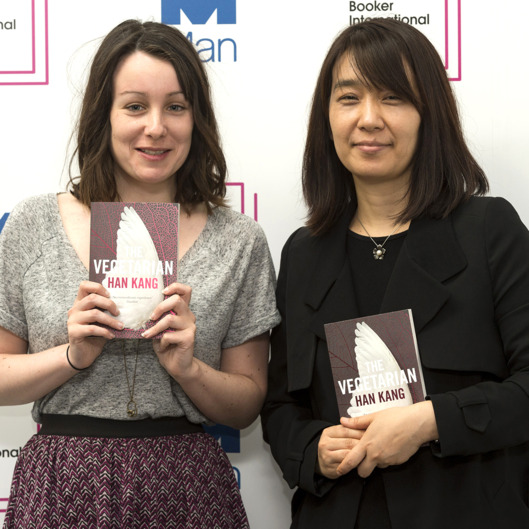 The Vegetarian, Han’s first book to be translated into English, is a dark novel about a woman who stops eating meat and wants to become a tree. From the Man Booker International website: “Fraught, disturbing, and beautiful, The Vegetarian is a novel about modern day South Korea, but also a novel about shame, desire, and our faltering attempts to understand others, from one imprisoned body to another.”

Han Kang is the author of two novels, The Vegetarian and Human Acts, both published in the UK by Portobello Books, in 2015 and 2016, respectively. Han was born in Gwangju, South Korea, and moved to Seoul at age ten. Her writing has won the Yi Sang Literary Prize, the Today’s Young Artist Award, and the Korean Literature Novel Award. She currently teaches creative writing at the Seoul Institute of the Arts.

The Man Booker International Prize was created in 2005 to highlight “one writer's overall contribution to fiction on the world stage.” Until this year, the award was given biennially to a living author for a body of work published either originally in English or available widely in translation. The prize is now awarded annually for a single work of fiction, translated from any language into English and published in the UK.