On January 12, 2010, a massive earthquake struck Haiti, followed by a series of aftershocks, ultimately leaving more than 250,000 people dead, 300,000 injured, and more than one million homeless. Three weeks after the original earthquake, the Haitian American writer Edwidge Danticat visited her hometown, Port-au-Prince. The house where she had grown up, in the poor neighborhood of Bel Air, had collapsed. So had the home of some of her relatives, who had been buried beneath the rubble for two days before being dug out. Some were still alive. Others, including her cousin and his nine-year-old son, were not. 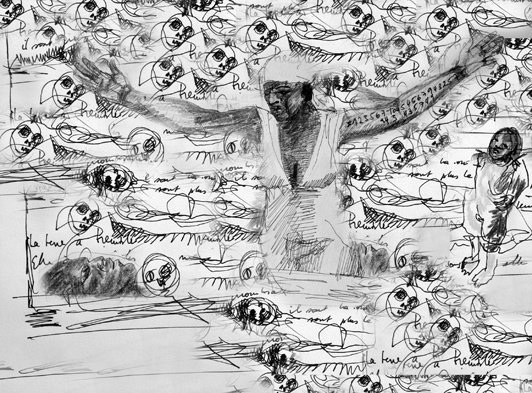 At the time, Danticat was finalizing the lineup of short stories to be included in Haiti Noir, one of the latest in Akashic Books’ series of noir fiction anthologies from around the world. While the stories she had selected evoked the country in which she grew up, Haiti’s social and physical landscapes had just suffered significant transformations, and it became necessary to reconsider the book’s content.

“There’s so much a sense of place in these stories—of Port-au-Prince, of the neighborhoods and the towns and countryside around it,” Danticat says in an interview during a break in the book tour for her recent essay collection, Create Dangerously: The Immigrant Artist at Work (Princeton University Press, 2010). “I just thought the earthquake should be part of it now.”

There was no shortage of literary work that had sprung from the disaster. The close-knit writers community of Haiti responded with vigor immediately after the earthquake, producing an array of poetry, fiction, and nonfiction. An annual spring book fair, Livres en Folie, went on as planned, drawing thousands of writers and book buyers. And last November, Poets for Haiti: An Anthology of Poetry and Art, featuring pieces by Haitian American writers such as Jean-Dany Joachim and Patrick Sylvain, was released by U.S. publisher Yileen Press.

In the end, Haiti Noir—published this month, the first anniversary of the earthquake—contains only three stories that deal with the event or its aftermath. “There were quickly a lot of very moving first-person accounts of the disaster, but I think it was too early for fiction,” says Danticat, who won the National Book Critics Circle Award for her memoir Brother, I’m Dying (Knopf, 2007) and received the MacArthur “Genius” Fellowship in 2009. “It’s the old problem of trying to write so soon about something so large, which is probably why, even now, no one’s written the great 9/11 novel. But with the three earthquake-related stories that I did include [‘Odette’ by Sylvain, ‘The Blue Hill’ by Rodney Saint-Éloi, and ‘The Harem’ by Ibi Aanu Zoboi], it seemed to me that the writers were looking in a different place, finding something deeper and maybe more dreamlike, something that you couldn’t get from the news.”

Indeed, the mainstream news coming out of Haiti—a country ravaged by decades of dire poverty, political unrest, government corruption, AIDS, hurricanes, the earthquake, and, most recently, a lethal outbreak of cholera—carries with it another set of frustrations that writers such as Danticat and her friend and fellow Haitian emigrant Marilène Phipps-Kettlewell know well.

“Living in the United States, it seems whenever one hears about Haiti, it’s in terms of drama, of trouble—the boat people, the earthquake, the hurricanes,” says Phipps-Kettlewell, whose new book of short stories about Haitian life, The Company of Heaven, won the Iowa Short Fiction Award and was published by the University of Iowa Press last October. “It’s as if the news about Haiti is always bad news.”

That same sentiment could be said to hold true for the narratives in Haiti Noir, which is, after all, a collection of “dark stories” that are not necessarily about crime but certainly include its possibility. The anthology contains several stories that feature the practice of Vodou and are written in a gothic mode suggestive of a blend of Poe, Kafka, and Haitian mysticism. Among these are Kettly Mars’s supernatural thriller “Paradise Inn,” in which a detective investigating police corruption is transferred to a remote village, where he gradually falls under the seductive power of a fearsome innkeeper and her succubus-like daughter, and Gary Victor’s “The Finger,” in which a criminal’s trophy (an expensive ring, with its dead former owner’s finger still attached) comes back to haunt him.

“It’s true that what people hear about Haiti is mostly negative, and people do ask me, ‘Why don’t you write something cheerful and happy about Haiti, to counter all that?’” says Danticat, who included one of her own stories, “Claire of the Sea Light,” in Haiti Noir. “I could write all the cheerful stories in the world, but it’s not going to stop the flow of what people think about Haiti. What’s needed to counter that negativity is not contrivedly upbeat, happy stories, but nuanced, complicated stories. And I think readers will understand that [the anthology] is a part of a series of noir fiction, and that it’s an opportunity to expose American readers to writers they may not have encountered before, since in many cases they’re being translated into English [from the original French or Creole] for the first time.” (Akashic publisher Johnny Temple says he’s “almost certain” there will be a French edition of Haiti Noir, likely a collaborative effort involving another publisher.)

Besides, Danticat says, “It’s very hard to write interesting fiction about very happy people for whom everything always goes well. The truth is somewhere in the middle—it’s part noir, part light—complicated and complex, the way people are. It will be a shock to some people that we Haitians can write these things. That’s the part that projects the positivity of Haiti—that we have these brilliant writers who can write stories like these, even if they’re dark.”

Edwidge Danticat on the Earthquake, Harold Bloom in the Hospital, and More
by Staff | Daily News 1.14.10