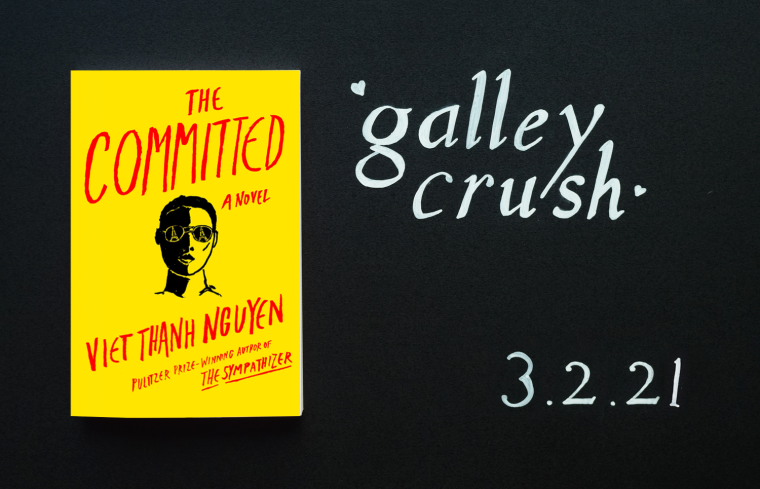 Perfect pitch: “The long-awaited new novel from one of America’s most highly regarded contemporary writers, The Committed follows the unnamed Sympathizer as he arrives in Paris in the early 1980s with his blood brother Bon. The pair try to overcome their pasts and ensure their futures by engaging in capitalism in one of its purest forms: drug dealing.”

First line: “We were the unwanted, the unneeded, and the unseen, invisible to all but ourselves.”

Big blurb: “This follow-up to his seminal The Sympathizer is Nguyen at his most ambitious and bold. Fierce in tone, capacious, witty, sharp, and deeply researched, The Committed marks, not just a sequel to its groundbreaking predecessor, but a sum total accumulation of a life devoted to Vietnamese American history and scholarship. This novel, like all daring novels, is a Trojan Horse, whose hidden power is a treatise of global futurity in the aftermath of colonial conquest. It asks questions central both to Vietnamese everywhere—and to our very species: How do we live in the wake of seismic loss and betrayal? And, perhaps even more critically, How do we laugh?” —Ocean Vuong

Author bio: Viet Thanh Nguyen was born in Vietnam and raised in America. He is the author of The Sympathizer, which was awarded the 2016 Pulitzer Prize for Fiction alongside seven other prizes. He is the editor of an anthology of refugee writing, The Displaced, and also the author of the short story collection The Refugees and the nonfiction book Nothing Ever Dies, a finalist for the National Book Award. He is the Aerol Arnold Professor of English and American Studies and Ethnicity at the University of Southern California and a recipient of fellowships from the Guggenheim and MacArthur foundations. He lives in Los Angeles.

Brandon Hobson’s The Removed, forthcoming from Ecco on February 16, 2021.