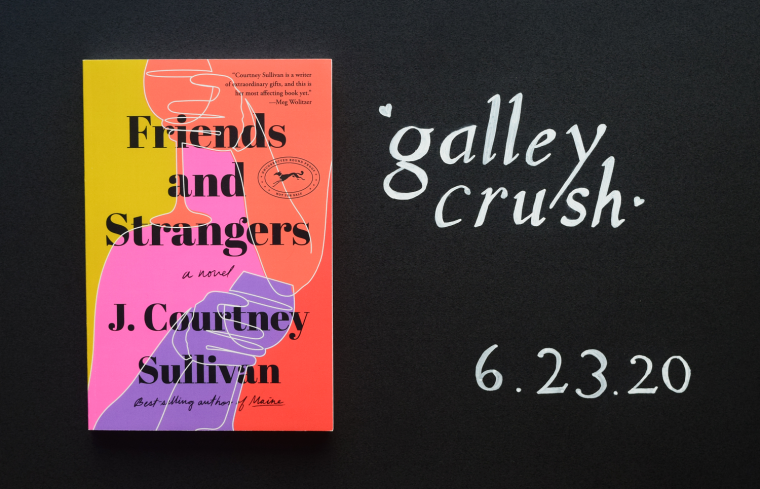 Perfect pitch: “From the best-selling author of Maine and Saints for All Occasions (named one of the Washington Post’s Ten Best Books of the Year and a New York Times Critics’ Pick) comes an insightful, hilarious, and compulsively readable novel about a complicated friendship between two women who are at two very different stages in life.”

First lines: “She awakened to silence. Nobody up at this hour besides mothers and insomniacs.”

Big blurb: “Friends and Strangers is a smart and deeply compelling exploration of female friendship and the complicated politics of motherhood and childcare. J. Courtney Sullivan is a shrewd and sympathetic observer of our current cultural moment, with an unerring eye for the way that the unspoken realities of money and class can affect even our most intimate relationships.” —Tom Perrotta

Author bio: J. Courtney Sullivan is the New York Times best-selling author of the novels Commencement, Maine, The Engagements, and Saints for All Occasions. Her work has been translated into seventeen languages. Sullivan’s writing has appeared in the New York Times Book Review, the Washington Post, the Chicago Tribune, New York magazine, Elle, Glamour, Allure, Real Simple, and O: The Oprah Magazine, among many others. She lives in Brooklyn, New York, with her husband and two children.

Imbolo Mbue’s How Beautiful We Were, forthcoming from Random House on June 16, 2020. Editor’s Note: This book’s publication date has been postponed.

Laura van den Berg’s I Hold a Wolf by the Ears, forthcoming from Farrar, Straus and Giroux on June 9, 2020. Editor’s Note: This book’s publication date has been postponed to July 28, 2020.