A Tightrope and a Safety Net 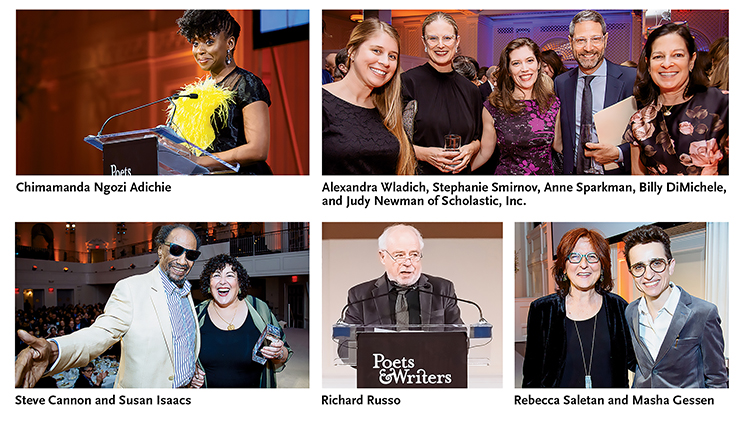 Chaired by Richard Robinson, chairman and chief executive officer of Scholastic, Inc., the event raised more than $600,000 to support Poets & Writers’ programs and publications. Novelist Susan Isaacs, chair of the Poets & Writers board of directors, was the master of ceremonies.

A highlight of the evening, the 2018 Barnes & Noble Writers for Writers Awards were presented to three authors who have made voluntary contributions that benefit the literary community. Acclaimed novelist and essayist Chimamanda Ngozi Adichie was recognized for her support and encouragement of young writers through her work with the Farafina Trust Creative Writing Workshop in Nigeria. Poet, playwright, novelist, and publisher Steve Cannon was honored for founding and leading A Gathering of the Tribes, a New York City institution that has nurtured poets in the East Village for more than twenty-five years. Pulitzer Prize–winning novelist Richard Russo was recognized for advocating on behalf of other writers as well as his service to the field in his role as vice president of the Authors Guild.

The 2018 Editor’s Award, which recognizes a book editor who has made an outstanding and sustained contribution to the publication of poetry or literary prose, was presented to Rebecca Saletan, vice president and editorial director of Riverhead Books, a Penguin Random House imprint. Saletan was introduced by Masha Gessen, a National Book Award–winning author who has worked with Saletan for many years. Saletan “enables writers to dare by showing that she will not let them make fools of themselves,” said Gessen. “She is both the coach and the safety net to the tightrope walk that is writing.” In accepting the award, Saletan spoke about the special vantage point allowed to editors: “More than anything, there is this: the sublime moment—and it never stops being sublime—when you get to attend, as beautiful, meaningful, and original work emerges in the world.” For more about the event and the honorees, visit www.pw.org/about-us/donate/annual_dinner.