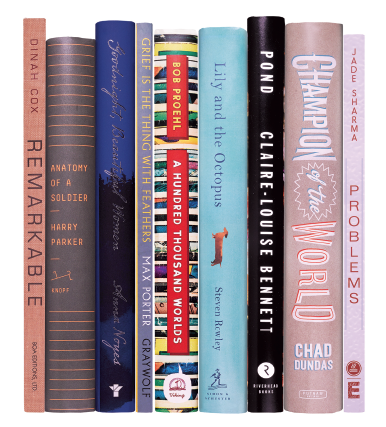 Remarkable (BOA Editions, May) by Dinah Cox
Set primarily in Oklahoma, the remarkable (that’s right, remarkable) stories in Cox’s award-winning collection spotlight characters whose wit, resilience, and pathos are as vast as the Great Plains landscape they inhabit.

Anatomy of a Soldier (Knopf, May) by Harry Parker
A former officer in the British Army who lost his legs in Afghanistan in 2009, Parker delivers a riveting, provocative novel that captures his wartime experience in an unconventional way. Forty-five inanimate objects—including a helmet, boots, and weapons—act as narrators, together offering the reader a powerful new perspective on war.

Goodnight, Beautiful Women (Grove, June) by Anna Noyes
With language both sensuous and precise, these interconnected stories immerse us in the lives of women and girls in coastal Maine as they navigate familial intimacy, sexual awakening, and love’s indiscretions.

Grief Is the Thing With Feathers (Graywolf, June) by Max Porter
In the wake of his wife’s sudden death, a man is visited by Crow, a “sentimental bird” that settles into the man’s life and the lives of his children in an attempt to heal the wounded family. A nuanced meditation that not only breaks open the boundaries of what constitutes a novel, but also demonstrates through its fragmentary form the unique challenge of writing about grief.

A Hundred Thousand Worlds (Viking, June) by Bob Proehl
Valerie and her son embark on a road trip from New York to Los Angeles to reunite the nine-year-old with his estranged father, attending comic-book conventions along the way. Proehl weaves the comic-con worlds of monsters and superheroes into a complex family saga, a tribute to a mother’s love and the way we tell stories that shape our lives.

Lily and the Octopus (Simon & Schuster, June)  by Steven Rowley
Rowley’s novel centers on narrator Ted Flask and his aging companion—a dachshund named Lily—but readers who mistake this as a simple “boy and his dog” story are in for a profound and pleasant surprise. This powerful debut is a touching exploration of friendship and grief.

Pond (Riverhead Books, July)  by Claire-Louise Bennett
In this compelling, innovative debut, the interior reality of an unnamed narrator—a solitary young woman living on the outskirts of a small coastal village—is revealed through the details of everyday life, some rendered in long stretches of narrative and others in poetic fragments. Bennett’s unique portrait of a persona emerges with an intensity and vision not often seen, or felt, in a debut.

Champion of the World (Putnam, July) by Chad Dundas
Gangsters, bootlegging, and fixed competitions converge in the tumultuous world of 1920s American wrestling, which disgraced former lightweight champion Pepper Van Dean and his wife, Moira, must navigate in order to create the life they want. With crisp, muscular prose, this 470-page historical novel illuminates a time of rapid change in America.

Problems (Emily Books, July) by Jade Sharma
Raw, unrepentant, and biting with dark humor, Problems turns the addiction-redemption narrative inside out, as Sharma follows heroin hobbyist Maya through her increasingly chaotic life after the end of both her marriage and an affair.