Finding and Amplifying New Voices: Affecting Change as an Editor

The following remarks were given at Poets & Writers’ annual gala, In Celebration of Writers, on March 29, 2022, in New York City. Hundreds of writers, agents, publishers, and readers gathered—online and in person—to celebrate writers and to honor Viet Thanh Nguyen, James Patterson, and Sonia Sanchez, as well as the author of these remarks, editor Sally Kim. 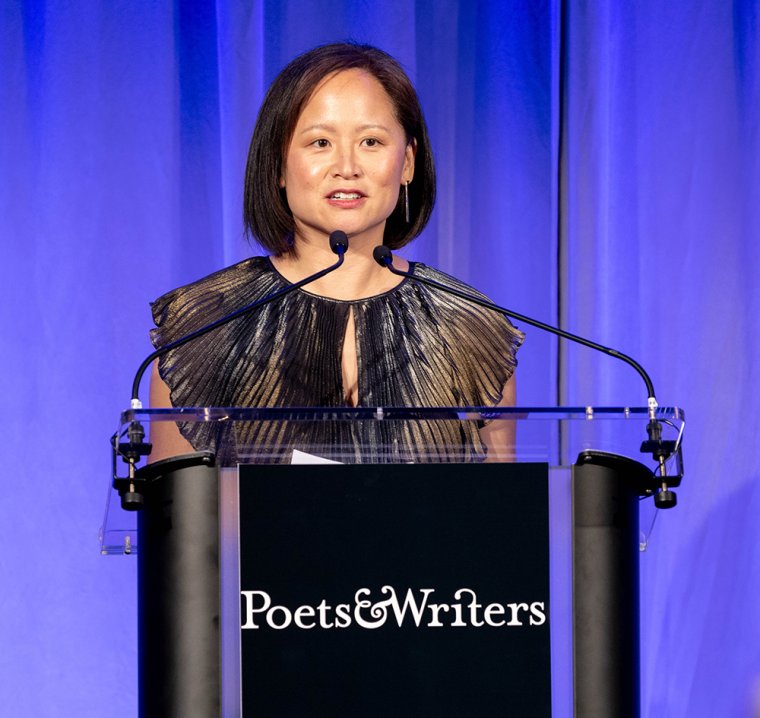 I am so humbled to be on this stage tonight with these accomplished writers. And it’s amazing to be in a room full of so many familiar and friendly faces, especially after all this time. Usually when I’m asked to speak, it’s to celebrate an author and an incredible book. It’s much harder, it turns out, to try to encapsulate the last twenty-seven years of my life as an editor. Every time I sat down to write this speech, my thoughts kept going back to a conversation I once had with my dad many years ago.

I was having a particularly tough time at work, so I was complaining to him—and I’d better be careful here, as some of my former publishers are in the room! He listened and then he chuckled in that quiet way of his, and said, “Sally, you’re not supposed to like your job. You have to keep going.”

Here’s a little bit about my dad: He grew up during war and occupation in Korea, and as soon as the U.S. opened its immigration doors, he arrived as a student at the University of Kansas, in 1969, with $60 in his pocket. He never told us directly about the hardships and racism he experienced—those things I gleaned in the in-between spaces of his funny stories about thirteen foreign students sharing a one-bedroom apartment, sleeping and eating in shifts because there wasn’t enough space.

Because why dwell on those things? He felt lucky, so lucky to be here at all.

After studying architecture he moved to LA, and to search for a job my dad rode the public bus around the city, armed only with a map and the newspaper want ads. He landed a job at a firm called Orbit Industries, but only because he showed up three days in a row even after they kept sending him away. They finally let him take a draftsman test, which he aced, and they hired him on the spot. To celebrate, he walked down the block to a local diner and finally treated himself to a precious Coca-Cola.

This is all to say that to my dad, work was something to be endured.

My path to publishing was anything but charmed—and those are stories for another speech—but suffice it to say I had my own version of my dad’s bus rides around the city. There was no one really like me in the industry back then, especially in editorial—my background and perspective were not exactly assets.

I felt lucky just to be here, so I took it upon myself to quiet my voice. I concentrated on those dualities of being an editor so that no one could question my right to be one: being introverted enough to wrestle with a manuscript for hours on end; extroverted enough to be that manuscript’s ultimate champion.

But now I know you need more than those things to be a good editor.

I don’t need to underline what an upside-down time it’s been for all of us these past two years. But particularly as the national conversation opened up deeper wounds and much-needed reconciliations, so many of us didn’t know what our roles were, how we could effect change. We donated, we marched, we reached out, we listened.

Then I realized, maybe for the first time, that the work we do, our day-to-day work, is our way of effecting change. We work through these challenges by doing what we are best skilled to do: Find new voices and amplify them. Publish books that reflect a part of ourselves and so many others back into the world.

Luck is success or failure based on chance, and not as a result of your own actions. Saying I’m just lucky to have a seat at the table frees me from any responsibility for what to do with that seat.

To amplify the voices of others, I have to amplify my own.

Slowly, bird by bird, book by book, it turns out that I didn’t quiet my voice at all.

Thank you, Poets & Writers, for this absolute honor, and for the incredible work you do.

I know this is called the Editor’s Award, but everyone knows editors are only as good as the publishing teams who sweat all the details with her: art, production, publicity, marketing, sales, subrights—everyone.

Thank you to the Putnam team, especially Alexis Welby, Ashley McClay, Ivan Held, Allison Dobson—and to my mentors Susan Moldow (from whom I learned something new every day) and most certainly, Madeline McIntosh.

And of course, my brilliant authors...some of whom are here tonight, who came from as far away as London!

Special thank yous to my family, who flew out from California to be here, and especially my mom, my #1 cheerleader who reads every single book I publish (even the scary ones).

And to my children, who often get short shrift because there is always a manuscript to edit, but who turned out pretty terrific anyway. I practiced this speech in front of them, and they said it was important for me to say their names, so: Thank you, Olive and Harry.

And to my patient husband—who, twenty-five years ago, sold all his earthly belongings and packed two duffel bags to move across the country with me. He believed I could long before I did. And who only sometimes complains about the hundreds of books and tote bags that crowd our house.

Sally Kim is senior vice president and publisher of G. P. Putnam’s Sons, an imprint of Penguin Random House. In addition to overseeing the group’s editorial, marketing, and publicity departments, she acquires and edits her own list of fiction, including New York Times best-sellers by Robert Jones, Jr. (The Prophets, a finalist for the National Book Award), Kiley Reid (Such a Fun Age), Chloe Benjamin (The Immortalists), Megan Abbott (The Turnout), and Cristina Alger (Girls Like Us). Recent and forthcoming publications include acclaimed novels by Sarah Winman, Alma Katsu, Steven Rowley, M. O. Walsh, Nickolas Butler, and Karen Joy Fowler. Prior to Putnam, Kim was editorial director at Touchstone/Simon & Schuster, and was an editor at HarperCollins, the Crown Publishing Group, and St. Martin’s Press, after getting her start at the Sandra Dijkstra Literary Agency more than twenty-five years ago. She’s acquired celebrated debuts by Gillian Flynn, Lisa Unger, Courtney Maum, Jami Attenberg, Ann Leary, and Holly Goddard Jones; as well as the award winners The Bright Forever by Lee Martin (finalist for the Pulitzer Prize); Truth in Advertising by John Kenney (winner of the Thurber Prize for American Humor); and The Incarnations by Susan Barker (finalist for the Kirkus Prize for Fiction and a New York Times Notable Book).