Among the many poetry collections that have been published in the weeks leading up to National Poetry Month, Jim and Dave Defeat the Masked Man, a collaborative book of sestinas by James Cummins and David Lehman released by Soft Skull Press in February, features perhaps the most prestigious and, simultaneously, zany cast of characters to appear in a book of poems since Alan Kaufman's Outlaw Bible of American Poetry was published by Thunder's Mouth Press seven years ago. Making cameo appearances are Marvin Bell, Ted Berrigan, Harold Bloom, Robert Hass, Philip Levine, Grace Paley, Rilke, Rimbaud, Anne Sexton, Gary Snyder, and Walt Whitman—not to mention Jesus Christ, Sylvester Stallone, and Meat Loaf, among others. 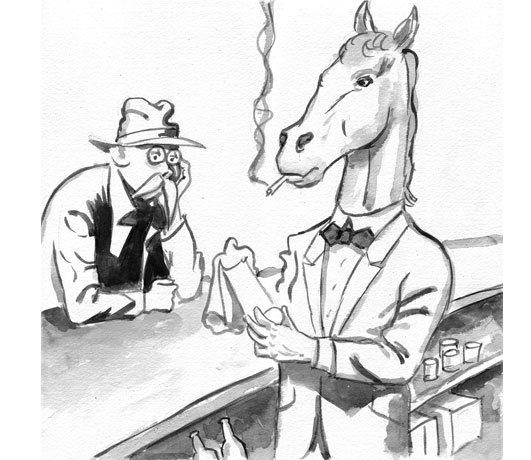 Indeed, Jim and Dave Defeat the Masked Man reads more like minutes from some poetry à go-go meeting than a book of high-minded formal verse. And that was exactly the idea, says Lehman, a professor at the New School in New York City and editor of The Best American Poetry series. "We tried to out-amuse each other," he says. "There was a chain effect in writing sestinas to each other, and after a while, it took on a real organic power."

Lehman and Cummins aren't the first poets to notice the organic power of the sestina, of course. A thirty-nine-line linked form believed to have been invented by twelfth-century Provençal troubadour-poet Arnaut Daniel, the sestina adheres to a set pattern of end-words, or teleutons, one of which appears at the end of each line. Each six-line stanza is a permutation of the one preceding it, except for the final three-line stanza, or envoi, which uses all six end-words as a triumphant send-off. The elaborate form has been revived by English-speaking poets several times over its nine-hundred-year history, from Sir Philip Sidney and Ezra Pound on up to the New Formalists of the 1980s.

But it is the New York School poets, in particular, Kenneth Koch and John Ashbery and their collaborative sestinas of the late 1950s—"Chrone Rhapsody" among them—that inspired Lehman and Cummins most directly. "Ashbery, to me, is just the best we have," says Cummins, a curator of the Elliston Poetry Library at the University of Cincinnati, where he also teaches. "Part of my writing sestinas so much has to come from my admiration for his work."

The idea to collect the collaborative poems into a book began in January 2003, but the story of the sestinas, and the friendship that was forged as a result of them, spans two decades. When Cummins's book The Whole Truth—another book of sestinas, based on the Perry Mason television series—was published by North Point Press in 1986, Lehman wrote a brief review "in Newsweek magazine, of all places," Cummins recalls. As a result, the two struck up a correspondence, and in 1994, when Lehman spent a month at the University of Cincinnati as an Elliston Library Poetry Fellow, they began writing the poems together.

Over the next few years, Lehman and Cummins sent sestinas to each other, and some themes emerged, which are revealed in the poems' titles themselves. Before Jim and Dave, the pair's alter-egos, "Defeat the Masked Man," they "Run Poems for the CIA into Nicaragua," "Parachute into Iowa City," and "Rescue Denise Duhamel from a Summer Writers' Conference."

Perhaps just as intriguing as the poems in the new book are the illustrations by painter Archie Rand, who has collaborated with such poets as John Yau and Robert Creeley, as well as Ashbery. Initially slated to provide a cover for the book, Rand instead came up with forty-two illustrations—one black-and-white watercolor or brush-and-ink painting for each of the thirty-nine poems, as well as the title page, foreword, and preface. "He read the poems and immediately jumped in," says Shanna Compton, the book's editor at Soft Skull Press. "Archie's illustrative style and sense of humor matched the authors' perfectly."

But do all of the people who are portrayed in the book share that sense of humor? "I've heard Marvin Bell isn't entirely thrilled with his cameos in two of the sestinas," Compton says. Perhaps for no other reason than that the poet's last name can also be used as a common noun and verb—very useful in a poem that demands end-words be used seven times—the long-time faculty member of the Iowa Writers' Workshop appears often in the sestinas. But Compton assures readers that the ribbing is meant in good fun. At a recent reading by both Cummins and Lehman at the KGB Bar in New York City's East Village, she says, "a whole roomful of people was delighted by his appearance again and again."