Around the World in 1,000 Journals

Some of the best ideas originate in the most unlikely places. For years, Brian Singer, a graphic designer in San Francisco, was fascinated by bathroom graffiti. The cryptic messages and drawings made him wonder what would happen if complete strangers around the world—and not only those who happened to share a public bathroom—were able to exchange their private thoughts. So four years ago he created the 1000 Journals Project, an ongoing experiment in collective journaling. 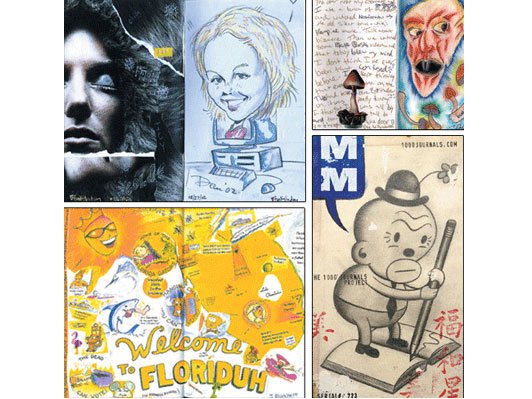 In 2000, Singer bought 1,000 blank journals, assigned each a number, and, with the help of fellow artists like rock poster artist Mark Arminski and illustrator Gary Baseman, designed 100 different covers for them. Inside each journal he stamped instructions inviting participants to write, draw, paint, or otherwise fill up the pages. Participants were then asked to leave the journal in a public place or pass it on to others. The first 100 journals were placed in San Francisco: Singer distributed some to friends and coworkers and left others in various locations, including bars, bathrooms, and cafés. He mailed the next 100 in groups of 10 to acquaintances in New York, Washington, Texas, Australia, and elsewhere.

As word of the project spread, people began requesting journals by sending e-mails and posting messages on its Web site (www.1000journals.com). By the time Singer had distributed about 700 journals, so many requests had poured in that he decided to create a sign-up list. Anyone receiving one of the last 300 journals was asked to send it to the next person on the list.

Singer has been able to track the journals' progress through e-mails and postings on the project's Web site. So far the journals have traveled to 35 countries, including Australia, Croatia, and Iraq, and to all 50 states. Some participants have e-mailed electronic scans of their work. As of this writing, browsers can view pages from 216 different journals.

The project's inspiration may have come from bathroom walls, but its philosophy is based on a slightly more literary precedent. In the 1920s, surrealist writers and artists devised a game in which each participant wrote or drew on a sheet of paper, folded the paper to hide his contribution, then passed it along to the next person, who did the same. The result was a collective work that art critic Nicolas Calas characterized as the "unconscious reality in the personality of the group." The process became known as the Exquisite Corpse (Cadavre Exquis), a name taken from the first sentence that was written using the process: "The exquisite corpse will drink the young wine."

The 1000 Journals Project accomplishes a similar task on a much larger scale. Each participant's narrative or drawing adds to the next, creating an enormous quilt of poems, political rants, personal musings, advice, photographs, sketches, and collages, and turning the journals into artistic and literary artifacts that chronicle "the unconscious reality" of strangers around the world.

"It's interesting when people who don't think they're writers or artists send in work," Singer says. "I've gotten a ton of good artwork. I've also seen a lot of life advice-type submissions, but these cease to be clichés when people follow up with personal stories."

Judging from the postings on the Web site, people are eager for the chance to contribute. "Everyone has something to say," Singer believes. He feels the 1000 Journals Project taps into the same creative impulse as blogging, the increasingly popular practice of keeping online diaries. Both illustrate the common desire to share one's thoughts and feelings in a nonrestrictive format. People "feel they're contributing to something greater than themselves," Singer says.

Of the 1,000 journals, only one has made its way back to Singer. Number 526 traveled to 13 states, Ireland, and Brazil. "It came back in a velvet pouch-a sort of Royal Crown bag," Singer says. "I thought, 'That's cool—people are even accessorizing them.' Opening it up was an amazing feeling, because when I sent these out I had no idea if any of them would ever return."

And that, explains Singer, is one of the most interesting aspects of his entirely self-funded experiment. What happens to the journals is as significant, he says, as what happens in them. "Are people selfless enough to send them back, or will they find them and keep them?" The project has also allowed Singer to witness how people communicate (some people really let themselves go, he says, while others censor themselves), and simply to learn about, as he puts it, "what average Joe does or says."

Time will tell how long the 1000 Journals Project lasts and how many journals make it back to San Francisco.If and when they do, Singer hopes to create a composite book. He is also considering a traveling exhibit in which visitors could not only read and touch the journals, but write and draw in them—wherever they find space. "Journals may be full but they're never really full," he says. "You can always find a little spot to scribble in."

Dalia Sofer is a freelance writer who lives in New York City.