This spring, after spending much of their lives caroming between continents, alternating between teaching gigs, residencies, and other adventures across this country and abroad, poets Joshua Edwards and Lynn Xu have finally decided to build a home together. The fact that they’re doing it with their own hands is perhaps the least unusual part of their plan. In addition to constructing a house in Marfa, Texas, the couple’s multifaceted project—which they’re calling Architecture for Travelers—entails a 680-mile walk across Texas, the creation of a collection of photographs taken every hour during the walk, and the writing of a book of poetry and prose about architecture and travel. As a whole, the endeavor addresses the question with which both poets have long struggled: How do you create a home for artists who are also inveterate travelers? 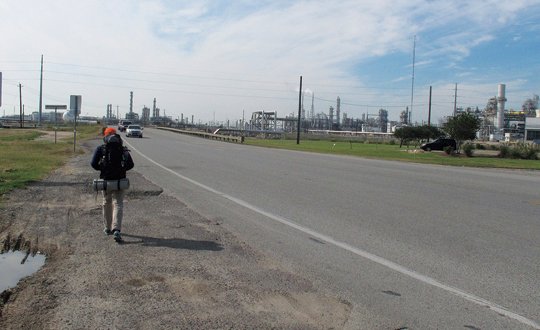 The poets bought a pair of narrow lots on the south side of Marfa, known to sky gazers for the mysterious Marfa lights and to writers and artists as the home of the prestigious Lannan Foundation residency. The couple, who married in the town in 2012, loved not only its density of artists and reasonable land prices but also its immensity of sky. “When you’re driving out there, you can feel that you’re on a planet,” Edwards says. “It’s kind of wonderful.”

Being reluctant to settle down, they wanted a home worthy of professional vagabonds, one that encouraged travel. They pondered this during a yearlong residency last year at the Akademie Schloss Solitude, an interdisciplinary institution in Stuttgart, Germany, that awards fellowships to writers and critics; visual and performing artists; designers, architects, and scientists—even chess masters. There, Edwards and Xu met Alan Worn, an architect and artist who was investigating how to convey meaning and narrative architecturally. Over the previous dozen years, Worn had worked on large institutional and commercial buildings, but struggled to find a balance between his professional and personal interests. Edwards and Xu admired the painted wood sculptures that Worn was making at the residency, which Xu describes as resembling “three-dimensional Ellsworth Kelly paintings.”

Worn was drawn to the poets’ work, too. “Josh gave a reading one night, and I enjoyed his mixture of different references,” Worn says. “It connected with ideas of architectural symbolism, how you struggle to represent or communicate something meaningful in a contemporary context.”

After the reading, Worn approached Edwards and Xu; hearing the poets discuss their desire to build a home designed around their peripatetic lifestyle, Worn expressed his interest in helping them.

“I was completely dumbstruck,” Edwards recalls. “It was as if he had read our minds.”

Worn began a dialogue with the poets that has continued since the residency, with Edwards and Xu outlining their vision for the house using poetry and prose, and Worn replying with architectural sketches inspired by the words. Edwards calls the conversation “a collaborative lyrical experience that will end in the construction of a home.”

Edwards envisions the house’s design as one that embraces both departure and the feeling of coming home. “Travelers need a house,” he writes in a poem for the project, “not only comfortable / for daily life and good / to come back to, but also / easy to live without.” The poem, also titled “Architecture for Travelers,” is part of Edwards’s collection of the same name, which will be published in December by the Akademie’s press, Edition Solitude.

While still at the residency, Worn asked Xu to sketch all the places the couple had ever lived, alone or together. Not trusting her drawing skills, she instead wrote short retrospective prose, “an architecture of my life,” as she called it, to help Worn get to know them.

Xu realized through this practice that she wanted the home to resist memory and inspire a freedom of movement. “Itinerancy is about forgetting,” she says. As a result, the house should, for instance, be as free of interior walls as possible. “Even though it’s nothing conscious, you will always remember how a house guides you through itself. It’s one of the most beautiful and insidious things about architecture: You have no other way to move than the way the house is telling you.”

Worn responded to the writings with sketches that attempted to translate the poets’ language, aesthetic, and personality into living spaces. He played with ideas of openness and enclosure, light and shadow.

The conversation is ongoing, but practicality will eventually prevail: Edwards and Xu will need somewhere to live. Guided by Worn’s sketches, they plan to break ground this spring on a simple cottage that will serve as their home until they finish the larger house; they will be assisted in both projects by Edwards’s parents and friends, some of whom have carpentry experience. After their home is completed, the cottage will be used to host visiting artists.

And there’s still more to the story: Because the front of the poets’ lot in Marfa abuts Galveston Street, and Edwards grew up in Galveston, Texas, he decided that before building a house for travelers it would be fitting to walk from his birthplace to his new home, a journey of 680 miles across the middle of the state.

The walk, which began last November and took more than a month to complete, would pay homage to Edwards’s and Xu’s wandering ways and recapitulate the journey of Edwards’s life. (Not Xu’s, though: “We couldn’t do the Shanghai to Marfa element,” Edwards says.)

Edwards was inspired by reading Japanese haiku-poet Matsuo Basho’s journals of his travels on foot; W. G. Sebald’s Rings of Saturn, a semiautobiographical narrative of a literary walking tour in England; and Werner Herzog’s Of Walking in Ice, which documents the filmmaker’s walk from Munich to Paris in 1974.

To document the process and pay for the journey, Edwards took a picture every hour while walking, producing more than 230 in total. He pre-sold the black-and-white photographs for twenty dollars each through the project’s website (www .architecturefortravelers.org) and all of the photos will be published in the aptly titled Photographs Taken at One-Hour Intervals During a Walk from Galveston Island to the West Texas Town of Marfa, a book that Edwards calls “a study of landscape and duration,” which will be released in April by Edition Solitude.

Edwards’s parents joined him as he left Galveston, and Xu tagged along for the one hundred miles from Austin to Kerrville, but for the most part he made the journey alone. After a long beach walk, he had to contend with traffic, narrow-shouldered roads, and ditches in East Texas, all under the weight of a heavy backpack. With up to thirty miles of walking every day, his ankles and shins quickly became inflamed. Pushing his supplies in a baby carriage, paid for by the Akademie after the journey began, helped ease the pain. “The cows look at me / like they’ve never seen a man / push a cart before,” he writes in a poem about the trek.

He didn’t listen to music while walking, both for his safety and to allow him to contemplate the journey’s meaning. But when he had the roads to himself in West Texas, he did read The Odyssey as he walked, allowing plenty of time to savor each chapter and compare Odysseus’s homeward voyage with his own.

Edwards’s journey was faster, at least: On December 20, forty-one days after setting out, he reached Marfa, where friends, family, and an empty plot waited, welcoming the weary traveler home.

Jonathan Vatner is a fiction writer in Brooklyn, New York. He is the staff writer for Hue, the alumni magazine of the Fashion Institute of Technology.