Anatomy of Awards: The Numbers Behind Free Grants & Awards

Grants & Awards, which includes information about upcoming deadlines for contests open to poets, fiction writers, creative nonfiction writers, and translators, as well as news of recent winners, has been a hallmark of every issue of this magazine for more than thirty years. One reason it is such a popular feature is that every contest we list has been carefully vetted to ensure it is administered responsibly by a trustworthy sponsor and that it offers a prize we consider worth a writer’s time, money, and effort. We don’t list every contest; we list every contest that will advance the careers of our readers.

After we’ve compiled and carefully checked each issue’s Grants & Awards section, we study the data we’ve collected to better understand the changing world of writing contests. These snapshots, which we frequently publish under the banner “Anatomy of Awards,” offer a simple view of the number of contests, the types of organizations that sponsor them, the amount of prize money up for grabs in any given issue, and other contest categories. When we collect a year’s worth of those numbers and place them alongside data from previous years, some very interesting pictures start to emerge.

For this issue we studied data from the past three years of our Deadlines section, paying particular attention to contests with no entry fees. Since 2015, the number of no-fee contests has hovered between 20 percent and 24 percent of the total number of contests. For instance, last year we listed 137 no-fee contests, or 21 percent of the 651 contests listed in those six issues. Also worth noting is that the total number of contests has dipped from 702 in 2015—a 7 percent decline over the past three years. This may be due in part to slight fluctuations in our editorial coverage (just because we didn’t list a certain contest in a specific year doesn’t mean it no longer exists), but since we update each issue’s contest listings based on the previous year’s listings, in some cases the decline points to another, more significant factor. In this issue alone, several contests that had been listed in last year’s May/June issue were canceled; at least one of those contests was cut because of lack of funding. 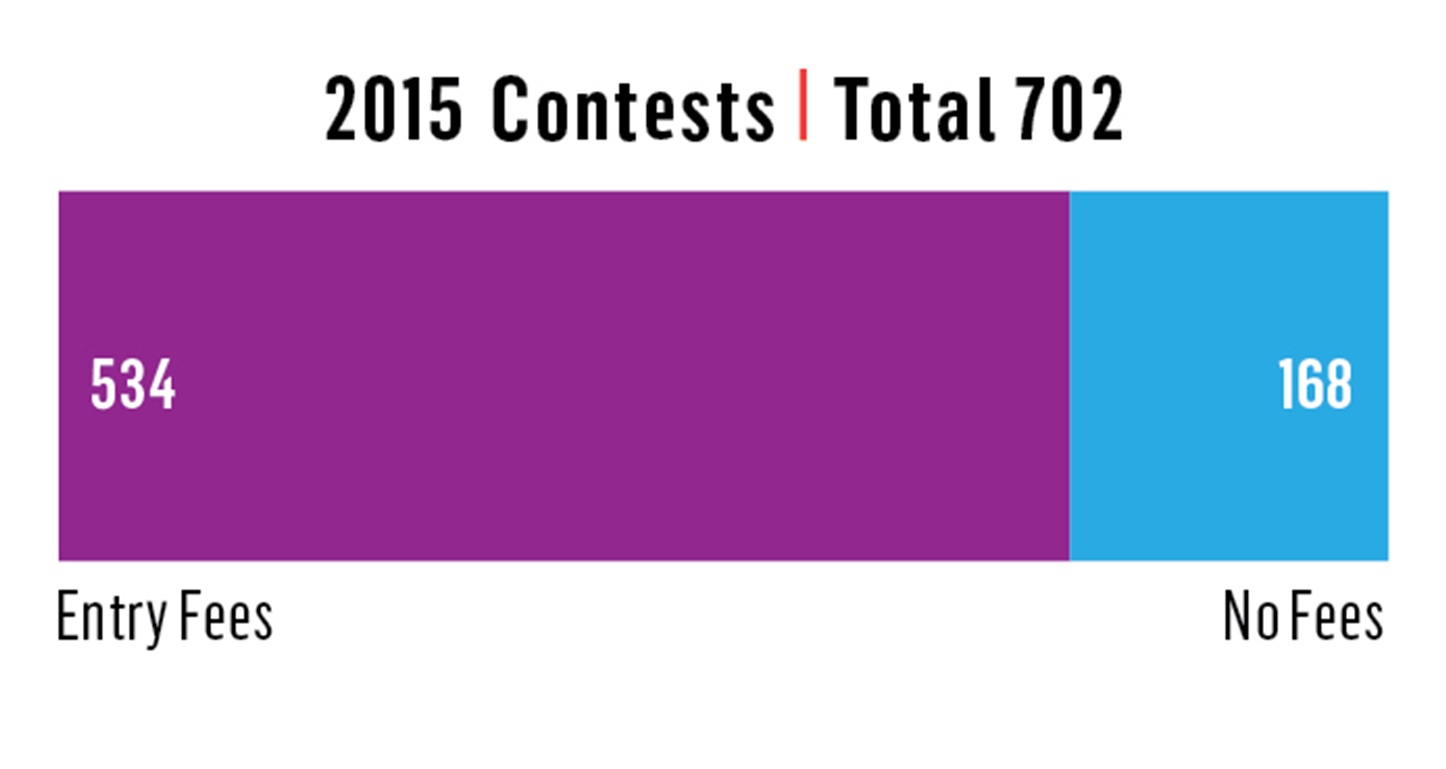 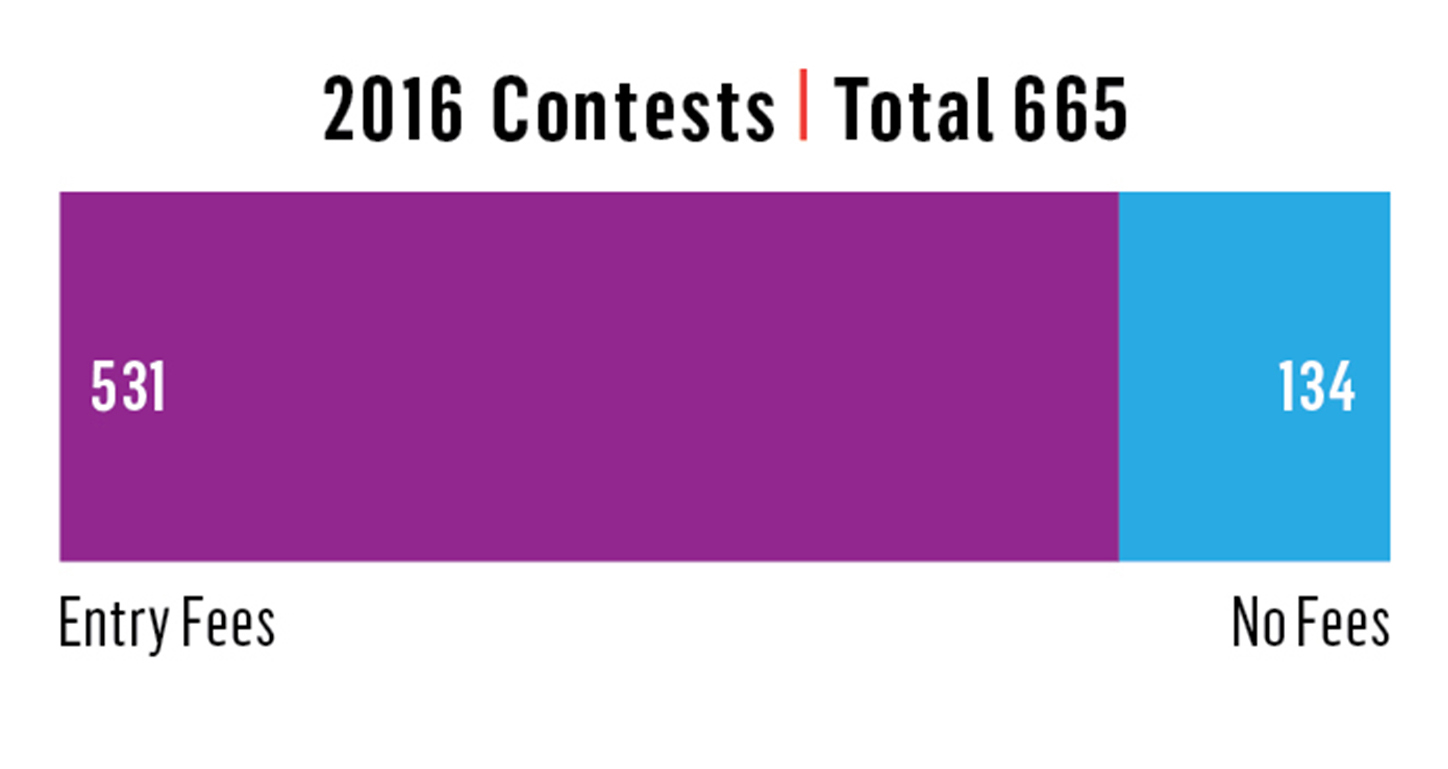 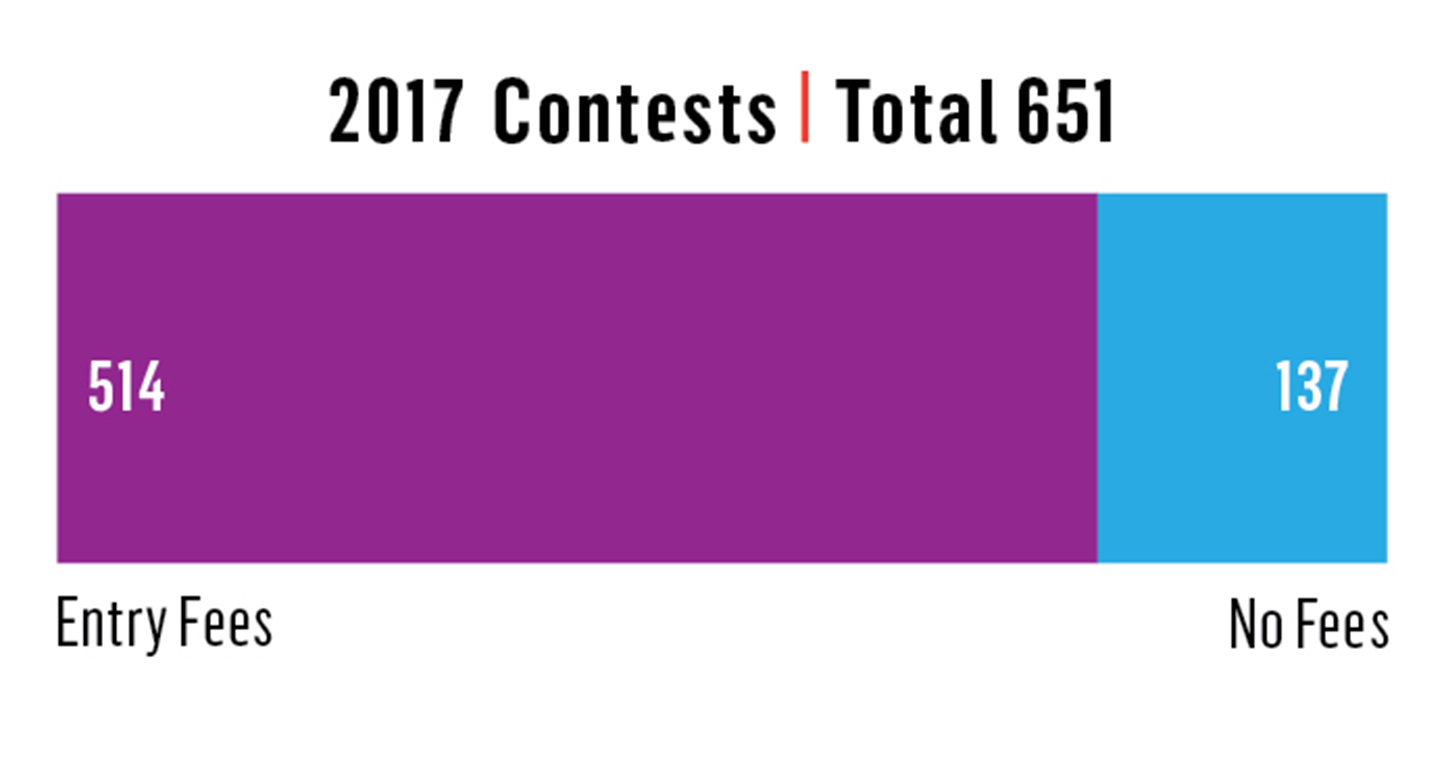 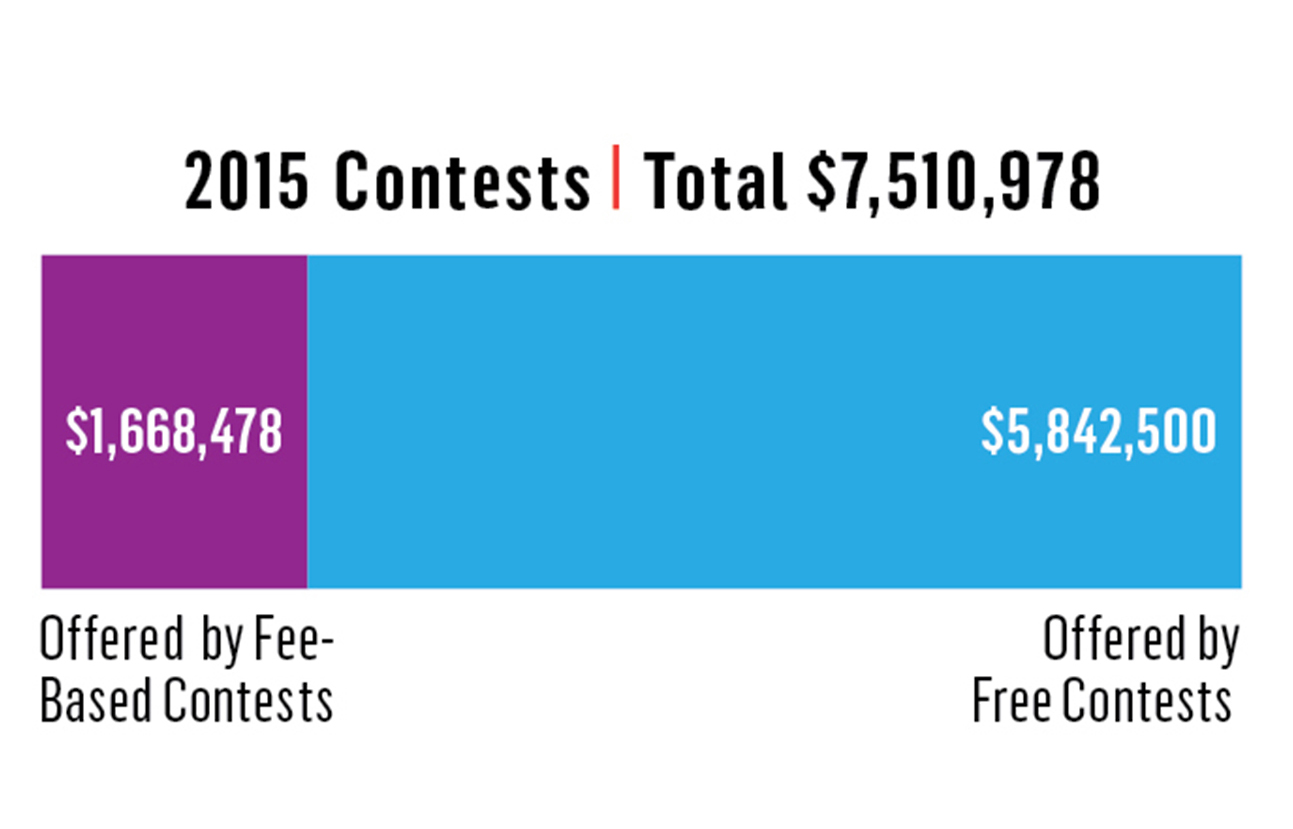 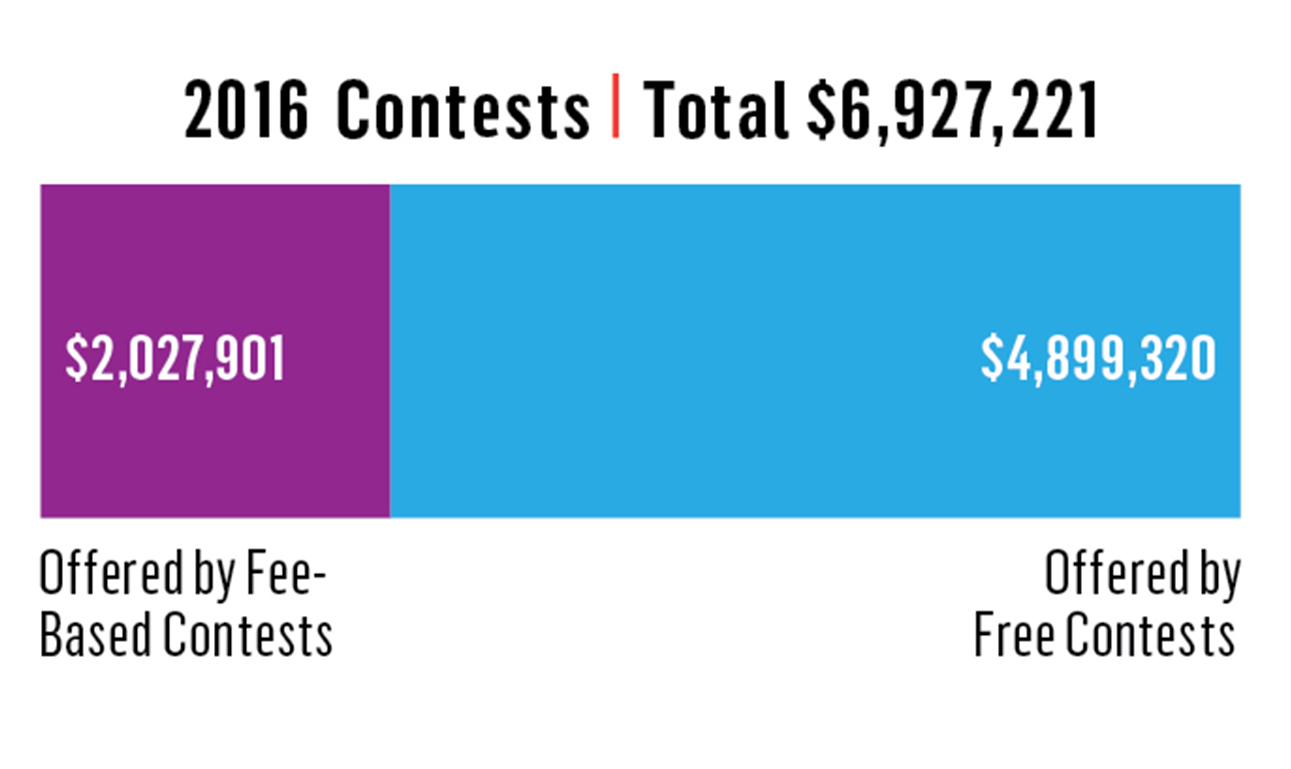 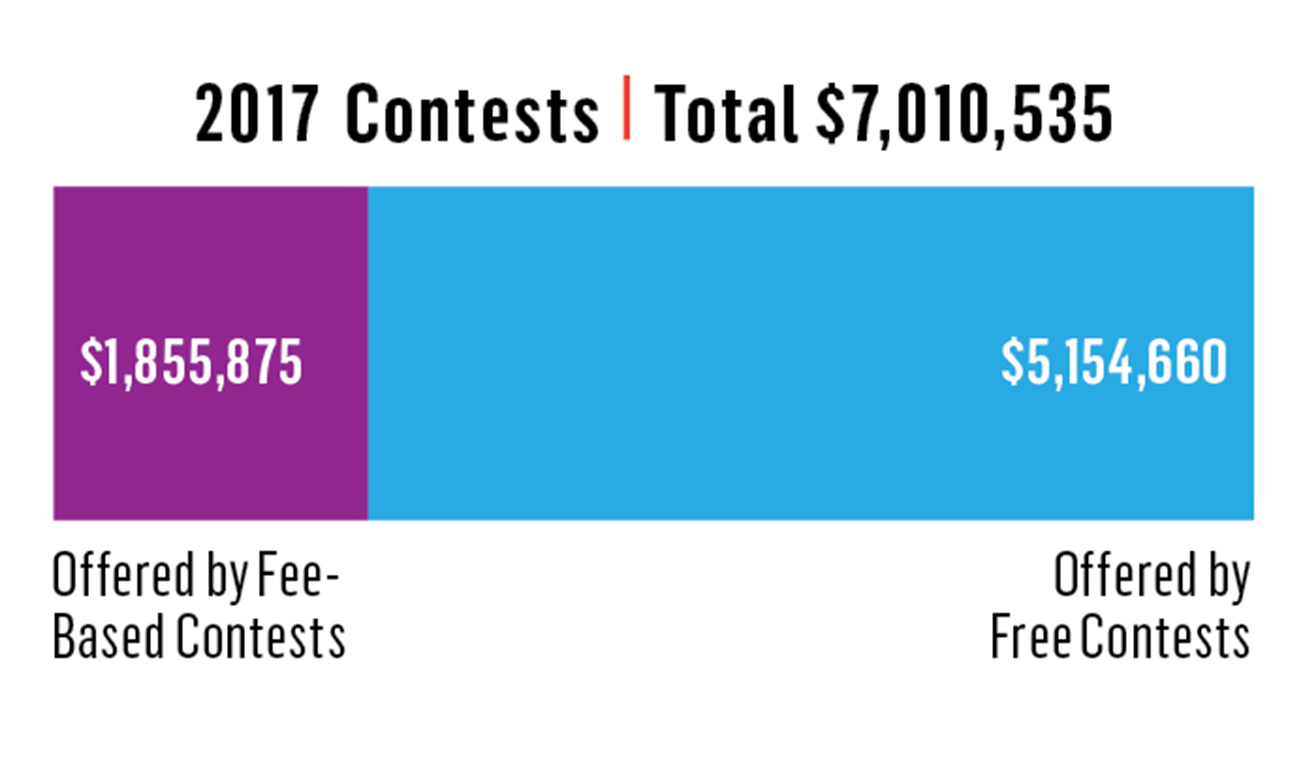 Number of Free Contests by Type of Sponsor

We’ve grouped the sponsors of contests that appear in Grants & Awards into four categories: nonprofits, universities, government agencies, and private companies. Nonprofits include magazines and presses, such as A Public Space and Graywolf Press, that operate as 501(c)(3) nonprofit organizations; similarly, sponsors such as the Iowa Review and the University of Pittsburgh Press are included in the universities category. Over the past three years, nearly half (46 percent) of no-fee contests were sponsored by nonprofit organizations such as the Loft Literary Center in Minneapolis, the Leeway Foundation in Philadelphia, and Literary Arts in Portland, Oregon. The second largest group of no-fee contest sponsors over the past three years is universities (31 percent), followed by private companies (12 percent) and government agencies (11 percent). But as we’ll see in the next chart, there’s more to the story of that last-place finish for the number of free contests sponsored by government agencies. 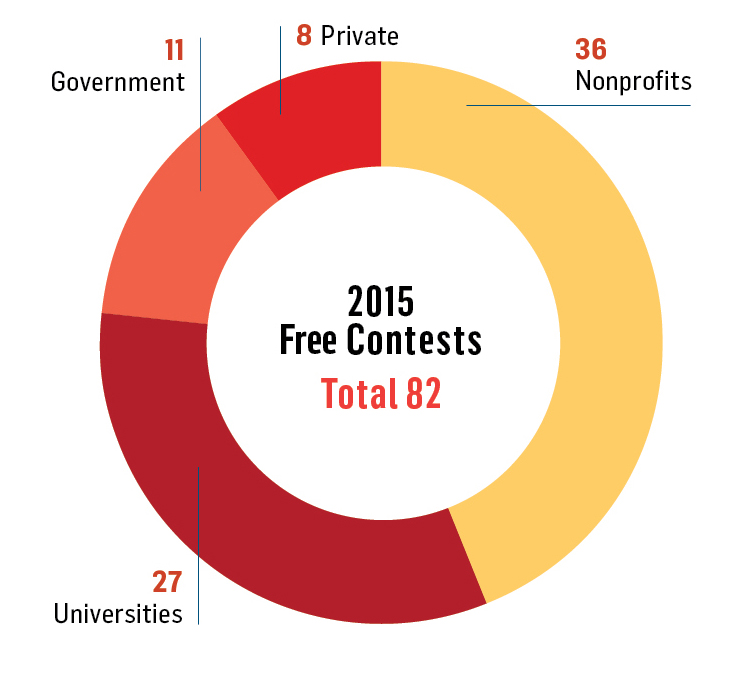 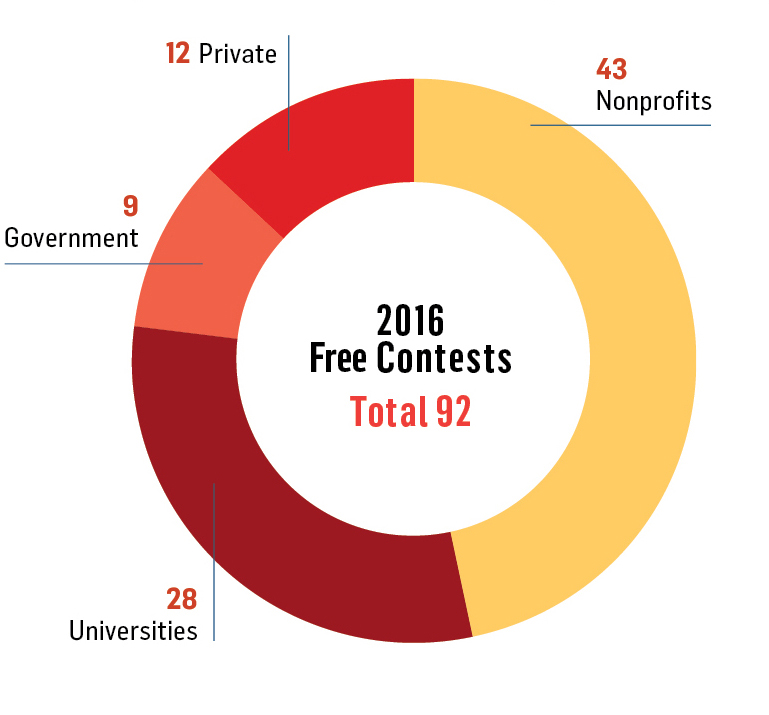 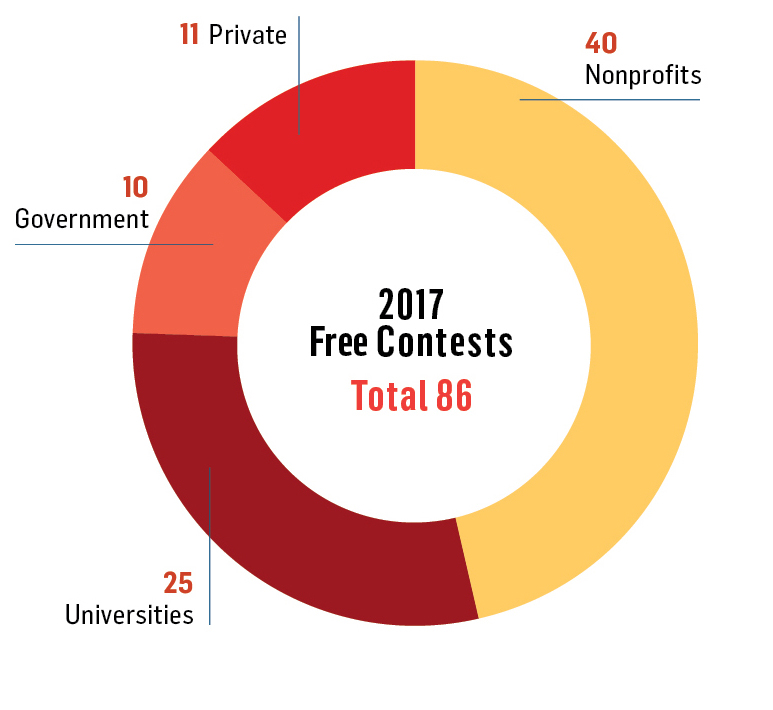 Amount of Free Contest Prize Money by Type of Sponsor

It is no surprise that free contests sponsored by nonprofit organizations have accounted for more prize money (51 percent) than contests sponsored by any other type of organization in the past three years, but the detail worth highlighting in the following chart is the amount of prize money offered by free contests sponsored by government agencies, such as the National Endowment for the Arts (NEA) and various state and local arts councils. While such agencies accounted for only 10 percent of the sponsors, they awarded 26 percent of the prize money. And there’s more: Consider where a significant amount of the typical nonprofit organization’s annual budget comes from: the NEA. Take away the NEA, as the current administration has recommended, twice, and the numbers behind Grants & Awards—free contests and fee-charging contests alike—would look very different. 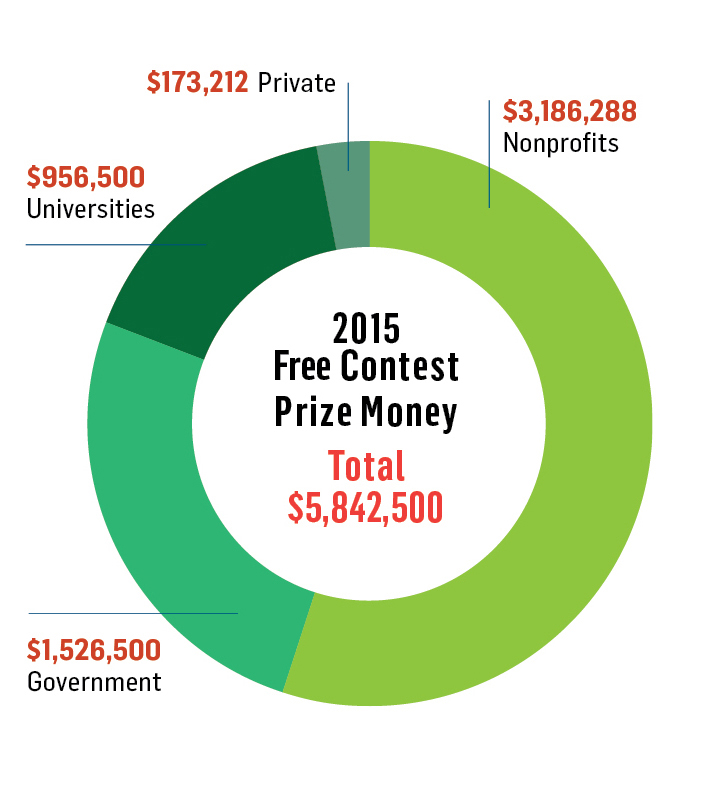 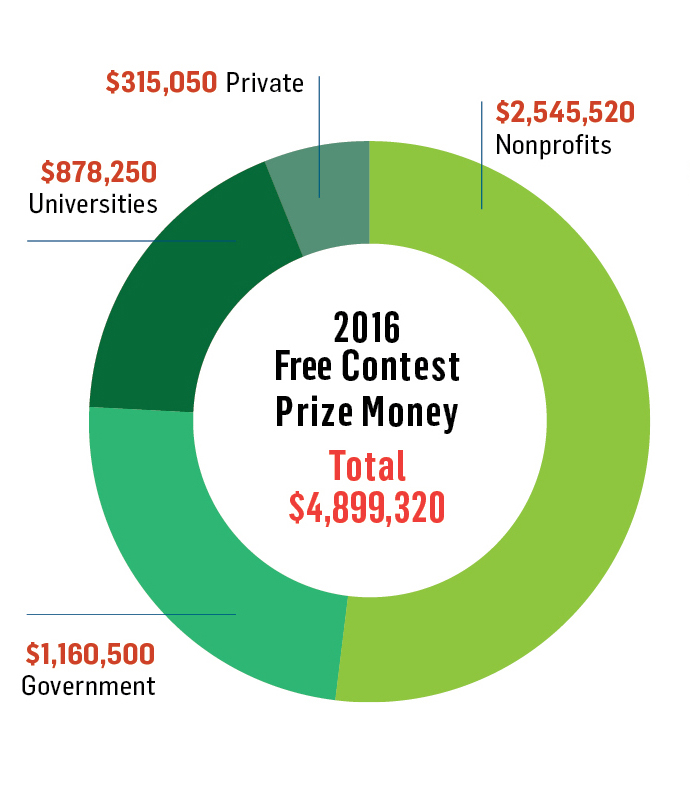 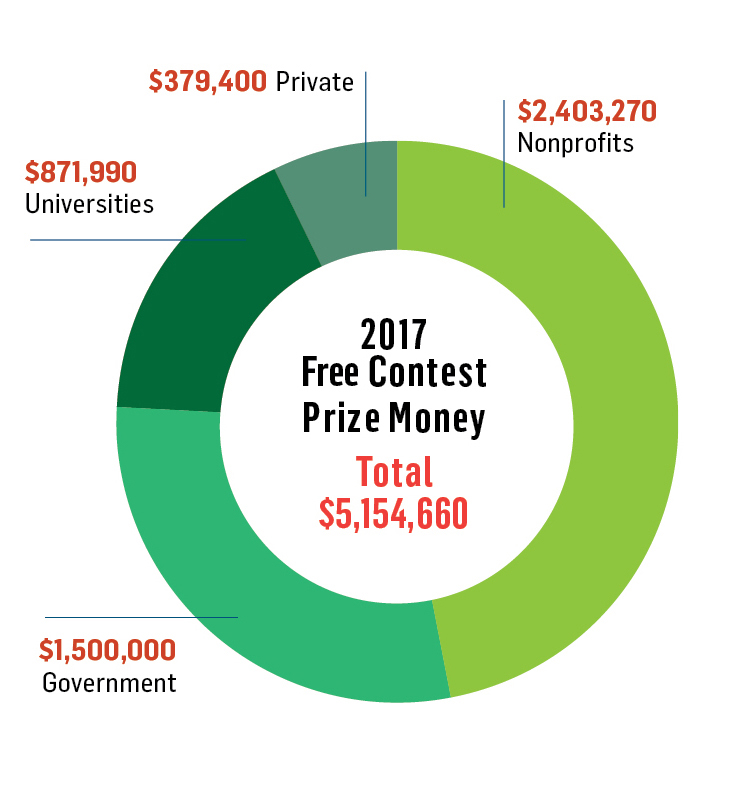