An Alaska Retreat for Women Writers

Mystery writer Dana Stabenow spent last summer watching cabins and a main house take shape amid a meadow of violet lupines in Homer, Alaska. The construction realized a dream several years in the making: In 2012, Stabenow decided to dedicate six of the ten acres she owns to the project of fostering women’s writing by building a new retreat set against the dramatic backdrop of the Aleutian mountain range’s snow-capped volcanoes. This April her vision comes to fruition as the Storyknife Writers Retreat opens its doors to its first group of resident writers. 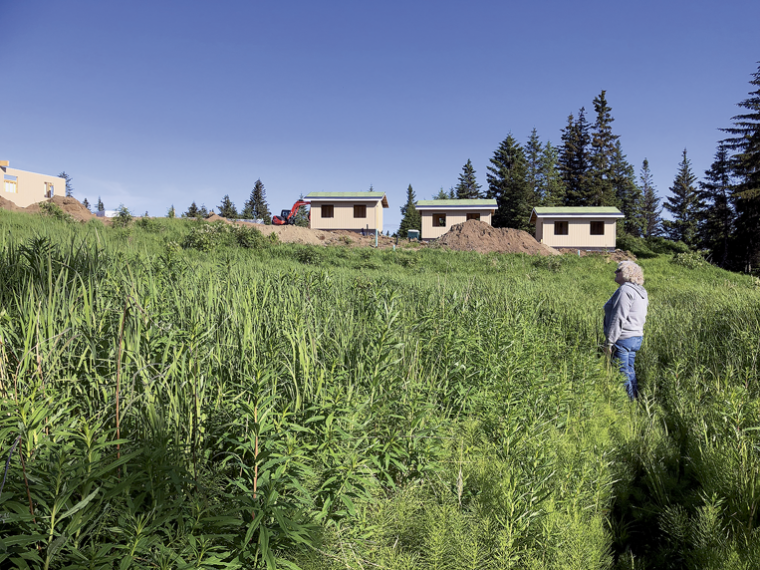 Situated just north of Homer’s Kachemak Bay and overlooking the arctic blues of Cook Inlet, the Storyknife Writers Retreat will provide what executive director Erin Hollowell calls “the big vista mental space” for forty-two established and emerging women writers a year. Six woman-identified or nonbinary writers at a time will be served evening meals at the main house and will lunch, work, and sleep in sponsored cabins named Carol, Betty, Diana, Evangeline, Katie, and Peggy. Their sole duty is to write during a two- or four-week fully-funded stay. The first group of residents in the new space—Stabenow piloted Storyknife with earlier retreats in a guest cabin—have already been selected; applications for the 2021 season will open later this year.

Storyknife follows the example of Hedgebrook, the Whidbey Island, Washington retreat that is one of the only other residencies in the United States strictly for women writers. Stabenow knows the power of such residencies: She credits Hedgebrook and the “radical hospitality” of its founder, Nancy Skinner Nordhoff, for helping launch her career.

Thirty years ago Stabenow quit her oil-pipeline communications job, earned her MFA, and gave herself a year to become a published writer. Katherine Gottlieb, her childhood friend, now a public health leader for native communities, pestered her to apply to Hedgebrook. Fortunately, Stabenow listened. “Hedgebrook made me a writer. I drew inspiration from the other writers, the natural landscape where each cottage stood, the very fact that we were told not to lift a finger. Our only commitment was to write. It was life-changing.” Stabenow sold her first book shortly thereafter, then launched her Kate Shugak series with the tough and vulnerable Aleut PI at the series’ center, now twenty-two books strong. Soon thereafter, in 1993, she won a coveted Edgar Award. She has since published close to forty books.

Storyknife’s name was inspired by the carved ivory knife brooch that Gottlieb, part Sugpiaq and a tribal member, gave Stabenow at the Edgar Awards ceremony. Traditionally given to young girls by their Central Yup’ik elders to sketch their stories in snow, the storyknife is, for Stabenow, emblematic of the gift culture that has fired the literary nonprofit. In addition to the land Stabenow has deeded to the organization, in just three years donors have contributed $1,250,000, the entire budget for construction. Hollowell says, “Over 375 individuals and more than a handful of foundations have come together to form the community of Storyknife because they understand that women’s stories are important and that women’s writing deserves to be supported.” Notable champions of Storyknife include the Atwood Foundation, Old Harbor Native Corporation, and the Rasmuson Foundation. Several sponsors underwrote construction costs for each of the cabins, including the ADA-accessible Evangeline cabin, which has a ramp connecting it to the main house. Poet Peggy Shumaker and her husband doubled every donation to a crowdfunding campaign to dedicate and name the main house for poet and marine biologist Eva Saulitis, who died of breast cancer in 2016.

Stabenow has attended to every detail of the cabins; each one features a gas stove, a movable desk, and a quilt donated by local quilters. Painted a dark green with brown shingles, the cabins reflect the surrounding spires of spruce trees studded with pine cones. Stabenow is pleased they “look grown from the landscape.” A path winds around a pond where a moose and her calf may wander. Native flowers preferred by sponsors will surround each structure. Eva’s House will be graced by Saulitis’s favorite: arctic poppies.

Sensitive to the fact that the retreat is built on what was originally Native land, Storyknife’s board will always have Native representation and its advisory council will invite Indigenous writers for residencies. At least one cabin a month will be a respite for these selected writers.

Stabenow hopes to make a residency experience possible for more women—Hedgebrook receives more than 1,400 applications a year for forty spaces—an opportunity she sees as critical in our time. “Storyknife is a response to Trump,” says Stabenow, who began fund-raising in earnest in 2016. “He uses women like Kleenex.” Stabenow’s gutsy youth, spent on her family’s fishing boat, informs her resolve: “I am an Alaskan, and I will not be dissuaded from supporting and fostering the writing of informed and empowered women.”

Amy Pence is a poet, writer, and tutor living in Atlanta. Her most recent books are the hybrid text [It] Incandescent (Ninebark Press, 2018) and the chapbook Your Posthumous Dress: Remnants From the Alexander McQueen Collection (dancing girl press, 2019).

Correction: An earlier version of this article referred to Dana Stabenow as an “Alaska native.” Stabenow was born and raised in Alaska, but is not Indigenous.