All the Secrets of the World

Steve Almond’s fans have long hailed the author for his provocative character-driven short stories, the morally astute commentary of his nonfiction, and his generous ministration to the bruised hearts and troubled minds of inquiring letter-writers as a cohost of the Dear Sugars podcast. This April, Almond makes his debut in longform fiction when Zando publishes All the Secrets of the World, a sweeping social novel that Rebecca Makkai describes as “sharp, fast-moving, juicy…a wild ride and a great deal of fun.” Set in the Sacramento of the 1980s, the book’s plot is ignited when Jenny and Lorena, two teenagers from different social mileus, are paired for a science fair project and become friends. Soon their families are drawn into a much larger drama, one that propels them into the desert on a saga that Anthony Doerr calls “at once a media critique, a coming-of-age story, a meticulously plotted police procedural, an exploration of racial paranoia, and a haunting account of lust and longing on the fringes of what is allowable.” 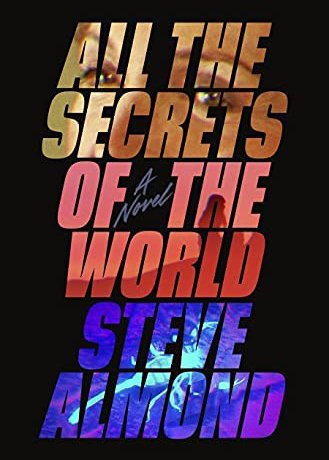 Almond’s new book is itself the culmination of a saga: In “Confessions of a Failed Novelist: If At First You Don’t Succeed, Try, Try, Try, Try, and Try Again,” which appears in the March/April 2022 issue of Poets & Writers Magazine, Almond describes the five unpublished novels he wrote on the path to All the Secrets of the World. Each, he says, was essential to showing him his ultimate job as a writer: “to impel my people, tenderly and ruthlessly, toward the truth of themselves.”

Below is an excerpt from the book.

Mr. Stallworth led them into the darkness. He lugged an oversized lantern, which he set down on a small rise. “Close your eyes and keep them shut until I say. Okay. Open.”

An iridescent purple light cast out in all directions. Lo’s eyes traveled across the ocean of sand, upon which now lay scattered scores of tiny glow-in-the-dark toys, the sort kids on TV pulled from cereal boxes. Then the toys began to move. These were living creatures, many-legged and scrabbling, like tiny lobsters.

Lo glanced at the sand around her feet. A scorpion the length of a hairpin labored under the weight of its stinger, which hung like a fanged jewel over the armored segments of it body.

“Don’t be frightened.” Mr. Stallworth said. He was suddenly right beside her.

“What do you think?”

She could feel Mr. Stallworth inspecting her face, trying to figure out if she really meant it. He took off his glasses and began furiously polishing the lenses with the hem of his shirt. For a queer moment, Lo imagined grabbing his glasses and tossing them away.

“Why do they glow?” she asked.

“Nobody knows. Fluorescence must convey some kind of evolutionary advantage, but it’s still their little secret.”

“You gonna pick one up?” This was Glen.

“I’m sure she’s had enough excitement for one night,” Mr. Stallworth said.

Mr. Stallworth switched on the lantern. He stared at her face again, half in wonder, and found another one, bluish under the light, a gentle species, he said, its sting no worse than a wasp’s. She reached out and let Mr. Stallworth uncurl her fingers. The earth was trembling beneath her. Then she realized that it was her, and not the earth.

“You don’t have to do this,” Mr. Stallworth said.

She met his gaze and nodded and Mr. Stallworth lowered the animal onto her.

The creature clung to the knob of her wrist, like a charm. Slowly, tentatively, it began to move toward her hand, the legs rising and falling like jointed oars. Lorena’s pulse lurched. She closed her eyes to keep from flinching. Tiny feet tickled her palm. She felt a dampness beneath her clothes, the dizziness of what was going to happen next. When she could stand it no longer she opened her eyes. The scorpion was perched on her thumb, perfectly still, its stinger hoisted like a tiny scythe.

Lorena couldn’t sleep; her blood was still roaring. She lay in the tent listening to Glen cast words into the fire, about soccer, the refs, some jerk whose ass he might kick. At last, he retreated to the other tent. Lorena counted to 200. Outside, Mr. Stallworth stood staring at the flames. He had gathered stones—from where Lo couldn’t imagine—and arranged them around the fire in a perfect circle.

He glanced up at her. “Trouble sleeping?”

“They’re remarkable, aren’t they? Not everyone can see it.” He dumped the dregs of his coffee and they listened to it hiss. The fire cast the line of his jaw in bronze. Mr. Stallworth seemed to be trying to decide something.

“If you really can’t sleep,” he said at last, “I’d like to show you something.”

He led her away from the camp, past the shallow latrine and onto an incline. She followed the beam of his flashlight, the soft crunch of his footfalls, panting to keep up. Then he stopped, so abruptly that she nearly walked into him. His flashlight showed the earth falling away. They had reached a precipice. With a click, he cast them into darkness. “Look up,” he said.

The stars were gigantic and glinting. Their ancient light pressed down. The space between the brightest bodies was speckled with celestial ash.

Mr. Stallworth pointed to a band of stars directly above them. “Orion’s Belt. Do you know the story of Orion?”

“He was a famous hunter. In mythology. He promised his lover he was going to kill every creature on earth.”

“No. The Goddess of the Earth sent a scorpion to devour him. He’s up there, too. On the other side of the sky.” Mr. Stallworth aimed the beam. “You have to draw the lines in your mind. The ancients used these constellations to map the night sky. They had no idea they were seeing an entire galaxy. The enormity would have crushed them.”

“We learned about constellations in our navigation unit,” Lorena said. “But it was just pictures in a book.”

Stallworth laughed softly, and she worried she had said something foolish. After a moment, he spoke again. “We didn’t have navigation units when I was in school. It was more of a religious curriculum. The Lord looks down from heaven on the children of man, to see if there are any who understand.”

Lorena recognized the passage. It was one of the psalms.

“They didn’t want us to be curious. They wanted us to be obedient.”

She wondered who they were and what sort of child Mr. Stallworth had been and whether he spoke to his own children in this way. She wondered if she should respond somehow then realized she didn’t have to. They had drifted into an easy silence; she was witnessing another part of him emerge. They stood together, gazing.

“You have to get away from all the light pollution to see them clearly,” he said.

He hummed. After a minute, he added, “Certain kinds of beauty make us disappear.”

Lorena had no idea what this meant, but she nodded. She was desperate to remain near him. It made no sense.

She heard the rasp of Mr. Stallworth rubbing his face, his profile faint against the starlight. “Everything back there, it’s all made up—the light and the pavement and the products. We just pretend it’s real.” He was standing closer now, inhaling and exhaling. “You know what I’m talking about. You wouldn’t be out here if you didn’t.”

She listened to him shift his weight. “You were brave tonight. Not many young women your age would be that brave.”

“Dangerous, too. If you pick the wrong one.”

Her mouth had gone dry; her tongue groped for words.

Her gaze shifted from the stars to his smile, which she could just make out. She could smell the smoke and sweaty tang of him and her breath, when she could breathe again, came hard. It was some power he had: to bring her deeper into herself, to make her feel certain things, to get her confused about what she wanted. He was a grown man. His limbs were thick and covered in hair. The moon was a shard of bone. She cast her eyes on the stars again, struggled to find one that wasn’t pulsing.

The author uses the 1965 novel Stoner as a catalyst for sharing his own struggles as a writer, father, and husband grappling with his own mortality.

Bad Stories: What the Hell Just Happened to Our Country
by Steve Almond | Online Exclusive 2.14.18

Described as “a lamentation aimed at providing clarity,” Bad Stories: What the Hell Just Happened to Our Country is Steve Almond's effort to make sense of our historical moment using literary voices, including Melville, Orwell, Bradbury...

The Darkness Within: In Praise of the Unlikable
by Steve Almond | The Literary Life 12.13.17

How important is it for characters to be likeable? A look at a controversial question, and how literature’s darker actors can pose useful lessons about both the craft of writing and ourselves.

The Problem of Entitlement: A Question of Respect
by Steve Almond | The Literary Life 8.20.14

A writer and workshop instructor grapples with what he sees as an increasing resistance toward the work of established authors among writing students.