Bad Stories: What the Hell Just Happened to Our Country

In February Red Hen Press will publish Bad Stories: What the Hell Just Happened to Our Country by Steve Almond. Described as “a lamentation aimed at providing clarity,” Bad Stories is Almond's effort to make sense of our historical moment using literary voices—from Melville to Orwell, Bradbury to Baldwin—that help dismantle, as Cheryl Strayed describes it, “the false narratives about American democracy that got us into the political pickle we’re in.” Below is an excerpt from the first chapter of the book. 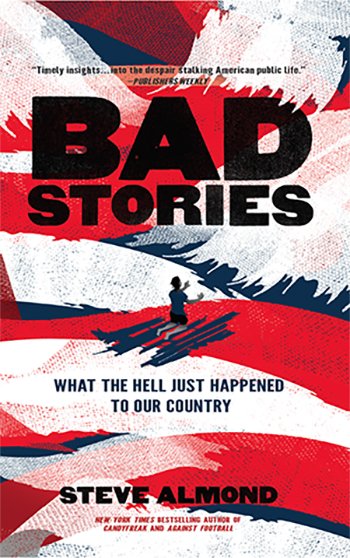 The subtitle of this bewildered little book matters. I’m not offering a single theory, or even a set of theories, as to how our democracy fell apart. I am working toward a synthesis of theories. The ascension of Donald Trump to the presidency is certainly the impetus for this investigation. But it should not be mistaken for my subject.

For most of my adult life, I’ve been tracking the odd and lurching course of our democracy. I’ve pursued this interest not as an historian or a political scientist, but as a reporter and, more recently, a fiction writer. That makes me a storyteller technically, though I feel more often like a woozy student of the American story.

I’ve placed my faith in stories because I believe them to be the basic unit of human consciousness. The stories we tell, and the ones we absorb, are what allow us to pluck meaning from the rush of experience.

In his elegant 2014 book, Sapiens: A Brief History of Humankind, the Israeli historian Yuval Noah Harari insists that our species came to dominate the world because of our unique ability to cooperate flexibly in large numbers. This capacity, he contends, stems from our unique cognitive ability to believe in the imagined, to tell stories that extend our bonds beyond clan loyalties. Our larger systems of cooperation, whether spiritual, political, legal, or financial, require faith in the notion of a common good.

But what happens when some of the stories we tell ourselves are bad, meaning fraudulent either by design or negligence? What happens when the stories are frivolous? Or when we ignore stories that are too frightening to confront? What happens when we fall under the sway of stories intended to sow discord, to blunt our moral imaginations, to warp our fears into loathing and our mercy into vengeance? The principle argument of this book is that bad stories lead to bad outcomes.

I agree with Harrari when he argues that our faith in stories has been integral to our survival as a species. But I also believe that the 2016 election is an object lesson in just how much harm bad stories can inflict upon even the sturdiest democracy.

As I struggled to make sense of the election, my mind kept spiraling back to one particular scene in American literature: Ahab, perched upon the quarterdeck of the Pequod, a “grand, ungodly, god-like man” with a prosthetic leg fashioned from a whale’s jawbone. The captain has come to announce the true nature of his mission, which is not economic in nature but deeply personal. He seeks revenge against the leviathan that maimed him and exhorts his crew with a soliloquy Trumpian in pitch if not diction.

“All visible objects are but pasteboard masks,” Ahab roars. “If man will strike, strike through the mask! How can the prisoner reach outside except by thrusting through the wall? To me, the white whale is that wall, shoved near to me. Sometimes I think there's naught beyond. But 'tis enough. He tasks me; he heaps me; I see in him outrageous strength, with an inscrutable malice sinewing it. That inscrutable thing is chiefly what I hate; and be the white whale agent, or be the white whale principal, I will wreak that hate upon him. Talk not to me of blasphemy, man; I'd strike the sun if it insulted me.”

It is this volcanic sense of grievance that fuels Melville’s saga, that binds the crew of the Pequod to their leader. “Ahab’s quenchless feud seemed mine,” Ishmael tells us, rather helplessly. Who can blame the kid? Ahab is something like a natural force, a vortex of vindication as mighty as the beast he pursues.

After four years of maniacal pursuit, Ahab spots his enemy and attacks. It does not go well. The wounded whale smites the Pequod, drowning all aboard and rendering the ship a hearse. In the end, “possessed by all the fallen angels” Ahab himself pierces the pale flank of his nemesis with his harpoon. But in the process, the rope winds up noosed around his neck and the beast drags him to his fate. Even a passing sky hawk gets snagged in the wreckage, “and so the bird of heaven, with archangelic shrieks, and his imperial beak thrust upwards, and his whole captive form folded in the flag of Ahab, went down with his ship, which, like satan, would not sink to hell till she had dragged a living part of heaven along with her, and helmeted herself with it.”

Melville is offering a mythic account of how one man’s virile bombast can ensnare everyone and everything it encounters. The setting is nautical, the language epic, the allusions Biblical and Shakespearean. But the tale, stripped to its ribs, is about the seductive force of the wounded male ego, and how naturally a ship steered by men might tack to its vengeful course.

The plot of Moby Dick pits man against the natural world. But its theme pits man against his own nature. The election of 2016 was, in its way, a retelling of this epic. Whether you choose to cast Trump as agent or principal hardly matters. What matters is that Americans joined the quest. Whether in rapture or disgust, we turned away from the compass of self-governance and toward the mesmerizing drama of aggression on display, the capitalist id unchained and all that it unchained within us. Trump struck through the mask. And it was enough.

When I started writing this book, in the months after the election, I was furious and frightened, worn down by decades of disappointment and determined, mostly, to launch harpoons at those I imagined to be my adversaries.

That, too, is a part of this story. The great peril of our age is not that we have turned into a nation of Ahabs, but of Ishmaels, passive observers too willing to embrace feuds that nourish our rancor and starve our common sense. It is this Manichean outlook that laid the groundwork for the ascent of Donald Trump and has, as of this writing, sustained his chaotic reign.

I am struggling in these pages to see Trumpism in a different light: as an opportunity to reckon with the bad stories at the heart of our great democratic experiment, and to recognize that often, embedded within these bad stories, are beautiful ideals and even correctives that might help us to contain the rage that has clouded our thoughts.

I have taken a patchwork approach to this project, one that knits statistical data, personal anecdote, cultural criticism, literary analysis and, when called for, outright intellectual theft. I’m trying, in the broadest sense, to understand how the American story arrived at this point.

I’ve taken Ishmael as my guide here. For while it’s true that he falls under the spell of Ahab’s folly (as did I, as did I) he is also its only surviving witness and chronicler, the voice left to impart whatever wisdom might be dredged from the deep. Amid the spectacle of a mad captain and his murderous quarry, we mustn’t forget that Moby Dick is a parable about our national destiny in which the only bulwark against self-inflicted tyranny is the telling of the story.

From Bad Stories: What the Hell Just Happened to Our Country by Steve Almond. Copyright © 2018 by Steve Almond. Used by permission of Red Hen Press. All rights reserved. No part of this excerpt may be reproduced or reprinted without permission in writing from the publisher.

Steve Almond is the author of eight books of fiction and nonfiction, including the New York Times bestsellers Candyfreak and Against Football. He teaches at the Nieman Fellowship for Journalism at Harvard University and hosts the New York Times podcast Dear Sugars with fellow writer Cheryl Strayed.

The Darkness Within: In Praise of the Unlikable
by Steve Almond | The Literary Life 12.13.17

How important is it for characters to be likeable? A look at a controversial question, and how literature’s darker actors can pose useful lessons about both the craft of writing and ourselves.

The Problem of Entitlement: A Question of Respect
by Steve Almond | The Literary Life 8.20.14

A writer and workshop instructor grapples with what he sees as an increasing resistance toward the work of established authors among writing students.

After reading fiction applications for an MFA Program, author Steve Almond, along with other experts on the subject, has some pointed advice for applicants.