All's Fair in Poems About Love and War

Despite the fluctuating aesthetics and ideologies espoused by critics, professors, and practitioners of poetry, there remain two general subjects that consistently offer poets inspiration: love and war. Of course, the last few years have provided the impetus for plenty of volumes about war—Poets Against the War (Nation Books), 100 Poets Against the War (Salt Publishing), Poems to Live By: In Uncertain Times (Beacon Press), and Staying Alive: Real Poems for Unreal Times (Bloodaxe Books) among them. 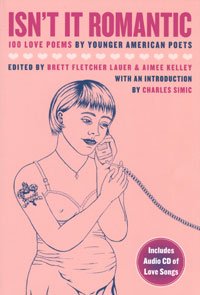 Now, with Valentine’s Day just around the corner, three new anthologies of love poems—Isn’t It Romantic: 100 Love Poems by Younger American Poets, published by Verse Press in November; Indian Love Poems, to be published this month by Everyman’s Library; and You Drive Me Crazy: Love Poems for Real Life, forthcoming from Warner Books later this month—are offering readers a respite from verse about violence.

Isn’t It Romantic, the latest offering from the five-year-old nonprofit Verse Press in Florence, Massachusetts, is being marketed to young readers who are “well versed” in contemporary poetry and culture. Most of the poets whose work is featured in the anthology are in their thirties (Peter Gizzi, the oldest contributor, is 45). As a bonus—reminiscent of the highly successful “Music Issue” published last June by the Believer, the literary magazine launched in 2003 by McSweeney’s Publishing—Isn’t It Romantic includes an audio CD of love songs by such bands as the Silver Jews, the Figments, and the Malarkies.

In his introduction to the anthology, Pulitzer Prize–winning poet Charles Simic writes, “A hundred poets writing about love in a country in which most news nowadays is about violence, death, and destruction, is cause for joy.” Joy, and maybe even a little celebration: Verse Press is planning simultaneous parties in cities across the country—including New York City, Boston, Seattle, San Francisco, Chicago, Los Angeles, Minneapolis, and Pittsburgh—on Valentine’s Day. The events will include readings by contributors and live performances by musicians featured on the CD.

Although the editors of the anthology, Brett Fletcher Lauer and Aimee Kelley, don’t think their book is a direct response to the war in Iraq, they realize it cannot be taken out of the context of the current military situation. “It does seem obvious that during times of greatest turmoil people turn to poetry, seeking either an articulation of their despair or a kind of consolation,” Kelley says. “Perhaps the ultimate protest is to demonstrate possibilities for and expressions of love.”

Meena Alexander, the award-winning poet and author of the memoir Fault Lines (Feminist Press), gathered expressions of love from a range of Indian cultures and eras for Indian Love Poems, the forthcoming anthology she edited for the Everyman’s Library Pocket Poets series. It includes poems by the 12th-century female poet Mahadeviyakka, the early-20th-century Nobel Prize–winning Bengali poet Rabindranath Tagore, and Vikram Seth, a poet who was born in Calcutta in 1952. And, of course, Indian Love Poems wouldn’t be complete without an excerpt from the Kama Sutra, the erotic handbook written more than 2,000 years ago. “Putting together this anthology as we live through a time of war has been a way to keep the heart and soul alive,” Alexander says.

According to editors Mary Esselman and Elizabeth Ash Vélez, the forthcoming anthology You Drive Me Crazy: Love Poems for Real Life offers “advice that spans centuries and continents,” from Shakespeare to Neruda to Li-Young Lee. Like the two other anthologies of love poems Esselman and Vélez have edited—The Hell With Love: Poems to Mend a Broken Heart and Kiss Off: Poems to Set You Free, also published by Warner Books—You Drive Me Crazy is aimed at a more general readership than Isn’t It Romantic and Indian Love Poems. “We wanted a book of inspiration and advice based on the notion that real love can be simple and sappy one day, chaotic and complex the next,” the editors write in their introduction. “So we put together this collection of beautiful, funny, feisty poems, designed to guide you through love’s rapture and rancor, from ecstasy to misery (and back again).”

Although these anthologies arrive at a time when social discourse is dominated by politics, war, and terrorism, the editors believe love poems—or at least the messages they convey—can compete with the din. Simic, evoking the words of the ancient Greek poet Sappho in his introduction to Isn’t It Romantic, agrees. “Almost three thousand years ago, Sappho wrote that she found it more thrilling to watch her girlfriend take off her skirt than to see the Greek fleet or the Trojan cavalry getting themselves ready for battle.” Whatever readers are looking for in a love poem—diversion, inspiration, advice, or just some good come-on lines—the editors are confident that their anthologies deliver.

Kevin Larimer is the associate editor of Poets & Writers Magazine.