Light streams through the windows of an orange and yellow house on Lakeland Avenue in Madison, Wisconsin, bringing the clarity of an early June afternoon to Sam Savage’s living room. A block away is Lake Monona, which forms the south shore of the isthmus that gives downtown Madison its distinctive layout. The lake’s name is the Chippewa word for “beautiful,” and considering the dog walkers and the sailboats and the city’s modest skyline framing the shore, it’s easy to see why. But you can’t see any of that from the living room. All you can see through the big front window is a muted, tree-lined street—a view that is pleasant precisely because there is nothing extraordinary about it. 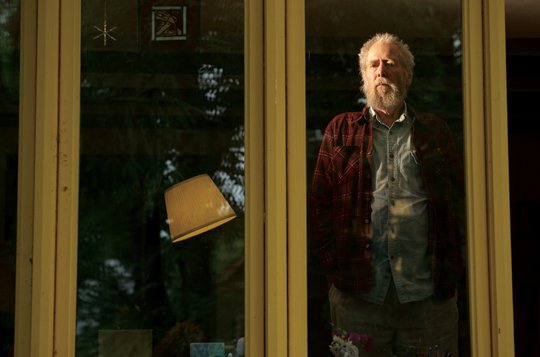 Inside the living room there is a simple couch and a wooden rocker—on which Savage is now resting—both positioned to take full advantage of the light. On the floor lies a fifteen-year-old dog, of questionable breed, named Bertram (Bertie to his friends), who can neither see nor hear very well. “Time is his ailment,” his owner says, in a way that indicates no further diagnosis is forthcoming. A red, leather chair is off to one side, closest to the window. “Over there, that’s my office,” says Savage, whose third novel, Glass, will be published this month by Coffee House Press. “I have a laptop. I turn it on and I put my feet up on that stool and I look out the window.” He is seventy years old, and during natural breaks in the conversation he exhales slowly, audibly, through pursed lips, as if just learning how to whistle—the result of a genetic lung disease, alpha-1 antitrypsin deficiency, that he has lived with for the past thirty-five years or so. “I just sit by the window and look out,” he says.

Which is not entirely true. For Sam Savage, sitting by the window and looking out is an act of the highest form of art. Although it may appear otherwise to passersby, the author is hard at work on the other side of the glass, creating some of the most original, unforgettable characters in contemporary fiction. There’s the eponymous rat in his debut novel, Firmin: Adventures of a Metropolitan Lowlife (Coffee House Press, 2006), who quotes Ford Madox Ford and James Joyce as he devours books, both literally and figuratively, in a Boston bookstore in the sixties. There’s Andrew Whittaker, the aspiring novelist and literary magazine editor in The Cry of the Sloth (Coffee House Press, 2009), whose talents are no match for his great ambitions and the even greater mountains of debt and debris threatening his house and his sanity. And now there’s Edna, the elderly widow in Glass whose ongoing, typewritten argument with her late husband, Clarence, a novelist, covers in painstaking detail the mundane particulars of a life while ultimately uncovering the transcendent power of art.

These flawed characters—these excluded, invisible outcasts—are the hallmark of an author whose furious dedication to writing and unwillingness to settle for anything less than perfection very nearly led him nowhere but here: a living room with a view of nothing in particular in the middle of the Midwest. If not for what Savage calls a fluke—writing a novel from the perspective of a character he initially thought was a failed writer but turned out to be a rat—no one would have ever read a word he wrote.

Despite the fact that he had to wait until he was sixty-five years old to publish his first book, Savage has been writing—poems, stories, and always the attempts at novels—for as long as he can remember. He had earlier, albeit modest success with poems, but he didn’t really like any of them. “I published a few things in a few reviews,” he says. “The Chattahoochee Review published a long poem of mine once. But it was like dropping a stone down a dry well. You write a poem, and you can say it was published, but no one reads the poem—a few other poets, maybe, but I didn’t know any of them. I thought, ‘Well hell.’ I wasn’t happy with it anyway, so I just sort of quit—gave up completely. I was fifty-five years old and I just gave up. And it was total and it was sincere.”

He calls it his “great death,” borrowing Zen Buddhism’s term for the point of absolute despair that precedes enlightenment. To achieve the fullness of life, according to Zen tradition, one must cast off the ego and experience a second birth. It’s an idea illustrated in the story of first-century Zen master Hsiang-yen, who as a student was given a koan by his master and, failing to understand it, gave up, surrendered, abandoned his studies. Later, on hearing a pebble hit a piece of hollow bamboo—ping—he attains enlightenment.

Most writers can relate to the feeling of being so frustrated, so at a loss for words, so unable to make sense of the whole literary enterprise that quitting—the poem, the story, the chapter, if just for the night or even the week—seems the only reasonable thing to do. For Savage it was different: “My great death lasted five years.”

After the Flood: A Profile of David Rhodes
by Kevin Larimer | Feature 9.1.08

The story of David Rhodes is punctuated by early successes and devastating losses, personal demons and unlikely angels, dogged determination and blind faith, and the next chapter begins with the triumphant return of a major American novelist...