A Prize for New Immigrant Writing

Although literary awards have increasingly honored the diversity of America’s foremost writers, few literary prizes are devoted to the celebration of immigrant writing. Fewer still are dedicated to providing a platform for immigrant writers by publishing their work. Chief among these is the Restless Books Prize for New Immigrant Writing. Since 2016 the prize, sponsored by the New York City–based independent publisher Restless Books, has awarded $10,000 and publication to a first-generation writer who has not previously published a book in English in a given genre. The prize is awarded in fiction and nonfiction in alternate years; judges have included Téa Obreht, Anjali Singh, and Héctor Tobar. This summer, judges will review entries for the fifth annual contest. Priyanka Champaneri’s novel, The City of Good Death, winner of the 2018 contest, had been set for a summer release, but due to the coronavirus pandemic, its publication was rescheduled for February 2021. 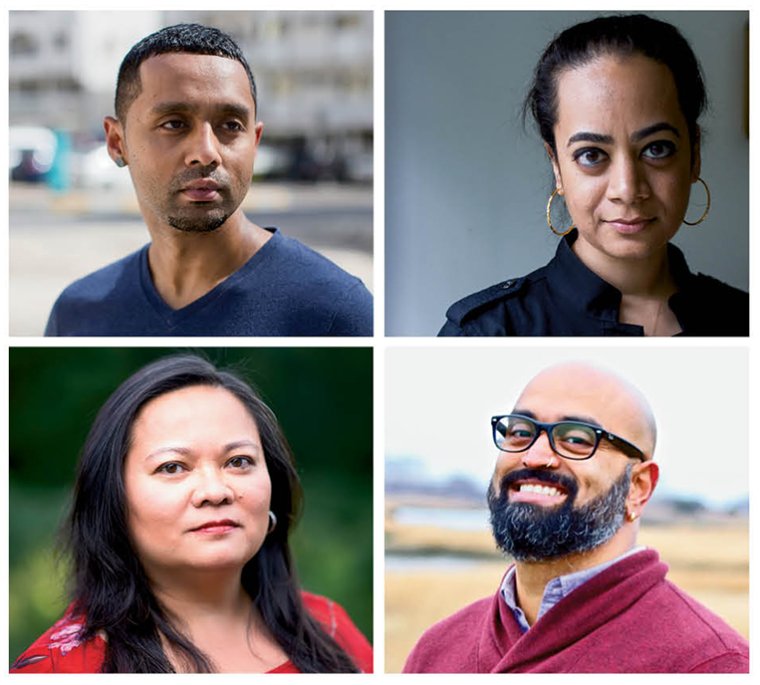 The scarcity of—and need for—this kind of prize is something its founder, Restless Books publisher Ilan Stavans, recognized and wanted to address. “At a time in which politicians and the media reduce immigrants to mere ciphers,” Stavans says, “the objective was clear-cut: to do what literature does best . . . by allowing emerging immigrant writers from anywhere and everywhere to tell their own stories.”

Four writers have received the award since its inception: fiction writers Deepak Unnikrishnan (2016) and Champaneri and nonfiction writers Grace Talusan (2017) and Rajiv Mohabir (2019). Although their books—which vary from gritty fables to sumptuous family sagas and unsparing personal reflections—are very different, Talusan feels that they are “a kind of family.”

All the award winners describe being previously turned away at publishers’ doors, time and again. “When I won the prize,” Unnikrishnan says, “[Temporary People] had been rejected by every major publisher in the United States and a few in India, including most of the independent presses I admired.” It took both Unnikrishnan and Champaneri ten years to finish their books and find a publisher. “There are champions from within the publishing industry who support good stories outside the limits of fads—the nebulous ‘hot’ country or culture of a moment—but we need more of them,” Champaneri says. “And we need more people—ideally, also from immigrant and first-generation communities—creating literary criticism of these works.”

In Restless Books, writers have found a press that champions new voices that push boundaries of form and content. “I have been told many times that there is no market for my queer, brown, immigrant writing,” says the prize’s most recent recipient, Rajiv Mohabir. “Winning this prize meant that I get to tell the queerest story in the queerest ways possible.” His forthcoming book, Antiman, will be a literary hybrid of essay, translation, poetry, speculation, folktale, and transcription—a “strange animal,” as he calls it.

Mohabir also speaks to the ways documentation requirements restrict funding for communities of artists and publication of immigrant writers: “What if ‘papers’ were not needed for publishing and receiving funds from the United States?” he asks. “What if we remove this kind of border wall from our literary spaces?” Because funding for the literary arts in the United States often requires that awardees be citizens or legal permanent residents, many immigrant and migrant writers are kept out of the industry. The Undocupoets campaign of 2015, led by Marcelo Hernandez Castillo, Christopher Soto, and Javier Zamora, sought to address this obstacle by petitioning ten prestigious first-book awards in poetry to eliminate their citizenship requirements to be more inclusive. Though Restless Books does not award prizes for poetry, its eligibility rules would have preempted this issue; since its inception the Prize for New Immigrant Writing has not included citizenship requirements—in fact, first-generation writers residing in any country are eligible.

While the publishing industry continues to reckon with who gets to tell what stories, the rarity of honors like the Restless Books prize serves as a reminder that there is much space still to be made for immigrant writers. As Mohabir says, in words that are equal parts warning and rallying cry, “We are not staying quiet. We won’t be shut out. We are already here. We won’t speak English because you want us to. We won’t let you tell our stories.”

Anni Liu is a writer, translator, and editor with writing published or forthcoming in the Georgia Review, Two Lines, Pleiades, and Quarterly West, and elsewhere. She holds an MFA from Indiana University and works at Graywolf Press.

Editor’s Note: This article was updated with the new publication date of Priyanka Champaneri’s novel, The City of Good Death.

In another installment of First, contributing editor Rigoberto González talks with Indo-Caribbean poet Rajiv Mohabir, discussing his debut collection, and how the poet uses language as identity and resistance while “feeling trapped inside a...

In an effort to open writing contests and grants to undocumented immigrants, a group called the “Undocupoets” successfully petitions some of the most prominent presses and literary organizations in America.