A Book About Delusional Thinking, a Song About Breathtaking Conviction

As part of an ongoing performance series, I recently wrote an “answer song” in response to a story from Kurt Andersen’s new book, Fantasyland: How America Went Haywire: A 500-Year History (Random House, 2017). Fantasyland is about America’s predilection for delusional thinking, and documents how fantasy has been encoded in the national genome since our founding days. 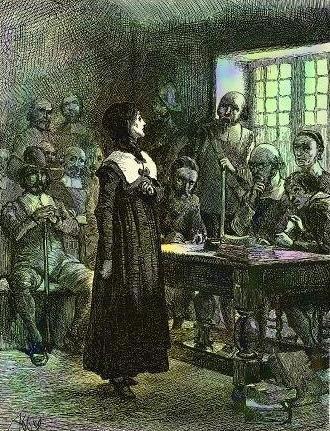 In the weeks leading up to our peformance at the Greenwich House Music School in New York City on October 4, I asked Andersen what selection he planned to read at the show. He chose a chapter about the Puritan settler Anne Hutchinson, who, like many of the historical characters in his book, was a person of breathtaking conviction.

On trial for defaming her fellow Puritanical preachers, Hutchinson told the judges that she was following the direct instruction of God, and defended herself so vigorously that the chief judge felt obliged to clarify that, “We are your judges, and not you ours.” Hutchinson was eventually banished to New Netherland (now the Bronx), where she was killed, along with her children, by members of the Siwanoy tribe.

While writing my “answer song” about Anne, I was immediately drawn to something she had said in her trial. She recounted that God assured her: “I am the same God that delivered Daniel out of the lion’s den. I will also deliver thee.”

I spoke to her for the first time in the winter
Just a child, too scared to cry
Lost for hours in the brush along the river
The priest only said she shouldn’t lie

A secret she held for so long
The judges told her to confess
But how can a miracle be wrong
She tries, but can’t convert to yes

Kurt Andersen, Vienna Teng, and Ben Arthur will perform at Greenwich House Music School on Wednesday, October 4. The first one hundred downloads of the song are free.

Ben Arthur’s upcoming album, American Castles, releases in November. Arthur has released seven previous albums and two novels, and is the host of the video series SongCraft Presents. Guests so far have included My Brightest Diamond, John Wesley Harding, Vienna Teng, Lera Lynn, Ximena Sarinana, and others. Arthur has performed live on national television and syndicated radio, and has shared the stage with artists including Dave Matthews, Tori Amos, Bruce Hornsby, Shawn Colvin, and Toots and the Maytals. He has licensed songs to ABC, CBS, Showtime, Lifetime, and PBS.

A songwriter responds to literature—such as stories by Jonathan Lethem and George Saunders—with music, carrying the creative conversation across art forms.

The Deepest Stuff: A Q&A With Susan Orlean
by Ben Arthur | Online Exclusive 12.14.16

The New Yorker staff writer and bestselling author of The Orchid Thief talks with musician Ben Arthur about her music, inspiration, distraction, adaptation, and her new book about the Los Angeles Public Library fire in 1986.