For the last few years I’ve been working on a series of “answer songs,” written in response to poems, stories, songs, and books. As I’ve admitted previously, one of the great pleasures of this project is that I get to speak with some of my biggest literary crushes, and occasionally even perform with them, including shows with Joyce Carol Oates, Rick Moody, and Susan Orlean. So, when an opportunity to book a gig with poet rock star Patricia Lockwood came along, I was thrilled. 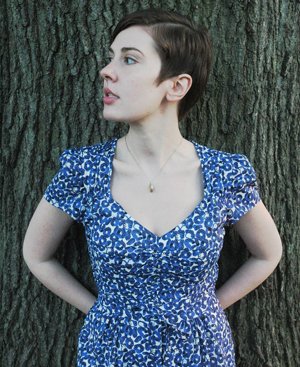 I asked Patricia if there was a particular chapter from her brilliant memoir, Priestdaddy (Riverhead Books, 2017), that I should use for inspiration. The book is wildly funny, but it also has parts that are aching, resonant, and easily reimagined as a song. She did not choose one of these. Instead, Patricia picked “Hart and Hind,” in which her father and brother go hunting, shoot no deer, and…her brother craps himself. Patricia added that I should write from the perspective of the deer, and that it should be a prog-rock song and/or heavily feature a Hammond organ. (It features a Hammond organ.)

Hart and Hind by Ben Arthur

As time nibbles through the years, my horns spread over my ears
Each day lived in the shadow of a gun
But the promise of bliss, when you smell as good as this
It’s hard to turn white tail and run

Darling, wo-on’t you let me
Do-on’t regret the
Untaken risk
Darling, pick up your the rifle
Do-on’t stifle
A love like this

Hesitation’s coming through, the leafy air ‘tween me and you
A mistake here would be my last
But new possibilities could bring us both to our knees
Passion’s question should never be unasked

Patricia Lockwood and Ben Arthur will perform along with songwriter Sasha Dobson at Joe’s Pub on Friday, June 9. The first one hundred downloads of the song are free.

Ben Arthur’s new album, Call and Response, is a collection of “answer songs.” Arthur has released six previous albums and two novels, and is the host of the video series SongCraft Presents. Guests so far have included My Brightest Diamond, John Wesley Harding, Vienna Teng, Lera Lynn, Ximena Sarinana, and others. Arthur has performed live on national television and syndicated radio, and has shared the stage with artists including Dave Matthews, Tori Amos, Bruce Hornsby, Shawn Colvin, and Toots and the Maytals. He has licensed songs to ABC, CBS, Showtime, Lifetime, and PBS.

A songwriter responds to literature—such as stories by Jonathan Lethem and George Saunders—with music, carrying the creative conversation across art forms.

The Deepest Stuff: A Q&A With Susan Orlean
by Ben Arthur | Online Exclusive 12.14.16

The New Yorker staff writer and bestselling author of The Orchid Thief talks with musician Ben Arthur about her music, inspiration, distraction, adaptation, and her new book about the Los Angeles Public Library fire in 1986.

It turns out our annual Inspiration Issue inspires more than writing. Singer-songwriter and novelist Ben Arthur (benarthur.com), who wrote and recorded a song inspired by Frank Bures's article "The Secret Lives of Stories: Rewriting Our Personal...

Singer-songwriter and novelist Ben Arthur, who recently finished the European leg of his tour for If You Look for My Heart, an interrelated concept album and novel, wrote and recorded a song inspired by Frank Bures's article "The Secret...
X