Considering that it took Janet Silver only a few weeks to land a plum new job as editor-at-large for Nan A. Talese's imprint at Doubleday, perhaps it isn't worth going into the whole convoluted chain of events that resulted in her ouster, back in January, from her position as vice president and publisher of Houghton Mifflin, the venerable Boston-based house she'd headed since 2001. No doubt it would be cleaner to avoid the subject altogether and talk instead about her background (she was raised in South Orange, New Jersey, and educated at Brown and the University of Chicago); the staggering list of authors she has edited, including Jonathan Safran Foer, Jhumpa Lahiri, Tim O'Brien, Cynthia Ozick, Philip Roth, Robert Stone, Natasha Trethewey, and John Edgar Wideman; or her charming house in the woods in Concord, Massachusetts, where our conversation took place. 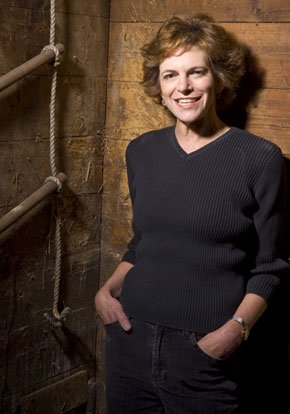 After all, maybe Silver was sacked after twenty-four years at Houghton for reasons having nothing to do with the ambitions of a thirty-nine-year-old Irish businessman named Barry O'Callaghan. But that seems unlikely. The facts are as follows: O'Callaghan is one of the richest men in Ireland. Although his background is in law, investment banking, and venture capitalism, in December 2006 his Dublin-based educational software company, Riverdeep, pulled off an audacious, highly leveraged reverse takeover of Houghton Mifflin. After the merger, he moved the new company's official headquarters to the Cayman Islands (always a promising sign). Then, seven months ago, O'Callaghan acquired another piece of low-hanging publishing fruit, Harcourt, taking the next step in an apparent attempt to build a publishing empire. In the fallout surrounding that merger, Silver was one of several well-regarded veteran editors to be shown the door.

Admittedly, it's hard to summon up much outrage about the conglomeration of American book publishers these days. Huge corporations have been buying and selling them with abandon for the past five decades. O'Callaghan is just the latest member of an elite fraternity whose top dog has to be Rupert Murdoch (his News Corporation owns the numerous HarperCollins imprints). Still, just as one can't help feeling a chill to realize that revenues generated by books like Brave New World, To Kill a Mockingbird, and A People's History of the United States are paying the lighting bills over at Fox News, O'Callaghan's recent actions, and their consequences, are poignant reminders that the media moguls who hold sway over today's publishing houses tend to look—and, more to the point, behave—less like Alfred Knopf or Bennett Cerf and more like Gordon Gekko from Oliver Stone's Wall Street. The problem is not so much that men like O'Callaghan continue to buy publishing houses, but rather that they rarely care enough about the work publishers do to hang on to them when it stops suiting their bottom line. Which is about the time when people like Janet Silver and her colleagues start losing their jobs—and their authors lose their most passionate advocates.

If any of this keeps Silver up at night, she didn't let on during our conversation, in which she spoke candidly about what she looks for in first novels and dispensed some useful advice for writers about agents. We talked in her living room while her dog, Roxy, and her cat, Phoebe, lounged on the floor beside the fireplace.

Tell me a little about your background.
I grew up in South Orange, New Jersey, which today has become a little like Brooklyn in that a lot of people from publishing seem to live there and commute. When I was growing up it was not like that at all. I went to college at Brown and graduate school at the University of Chicago. It was when I was a graduate student at Chicago that I began to realize I was more temperamentally inclined toward editorial work than scholarship.

You were studying English?
Yes. I was actually on a track for a doctorate. But while I was in school I needed to support myself. I got a job as the managing editor of this quarterly, Critical Inquiry, which was one of the journals published by the University of Chicago Press. This was in the mid-seventies, late seventies. It was kind of wild. The journal did criticism in the arts, in all of the arts, but primarily in literature. This was in the heyday of the great deconstruction rage, so we were publishing the first translations of essays by Derrida, for instance, and Lacan, and some essays by Jacques Barzun. It was very, very intellectual. It was very abstract. But we were also publishing the early essays by people like Skip Gates. I got to work with some amazing writers, and we really did edit the pieces, because when you work for a journal things have to be a particular length and they have to make a particular point. A lot of the academic writers we worked with really welcomed some input.

The other nice thing about working for a journal—unlike working on a dissertation, which is endless—is that there was an end product four times a year. It was this thing that other people read. It was a way to be engaged in a cultural conversation that seemed important—at the time, anyway. I loved the interaction with the writers. I loved the opportunity to learn about the production of a journal. We were a very small office. We did all of the editing, all the copyediting, all the proofreading. It was this little mini-education in a certain kind of publishing.

How did you get from there to Houghton?
I was there for five years, doing my course work and working full time. But before I finished, my husband and I got married. He had finished his doctorate in philosophy and was teaching and on the job market. This was a time when there were pretty much no jobs unless you were willing to go from North Dakota to South Texas to wherever. That wasn't what he wanted to do. So, like many people with doctorates in that era, he went to law school. As much as we both loved Chicago, we also wanted to come back east. So we came back and he went to Harvard Law School and I needed to work. The only skill I had was editing. I started doing freelance work, some of it for the Museum of Fine Arts—I also have a background in art history—and some of it for Houghton Mifflin. It just sort of evolved and I began to work there full time.

What was your position when you started at Houghton Mifflin?
Manuscript editor. Some publishers used freelance copyeditors—this was 1984—but Houghton always had an in-house group of people, whom they called manuscript editors, who did copyediting and a lot of developmental work. It was a chance to get in the door and begin to learn trade publishing from the ground up. I never did the standard editorial assistant thing where you go up through the ranks that way. When I was a manuscript editor, one of the earlier books I worked on was [Margaret Atwood's] The Handmaid's Tale. Nan Talese was at Houghton Mifflin at the time—so it feels like a nice symmetry that it's come full circle now.

Was there somebody who taught you how to edit?
I pretty much learned by doing it. To some degree I feel as though the opportunity to edit articles first was a great way to start. It's much smaller. It's more contained. You learn to focus on every line, every paragraph, and get that fine detail down. I never thought of myself as a detail person, but when you start working that way, you kind of become one. You are forced to slow down and not only think about the larger argument and whether it's flowing naturally, but also to concentrate on a more micro level. To some degree, the authors teach you. You make your mistakes, and boy, do they let you know it. But the other thing is that, having spent a lot of time reading, you just naturally know if a narrative is flowing well or if you're stumbling over things and things don't seem entirely clear. When I was in graduate school, my concentration was in fiction, so I naturally gravitated toward editing fiction more than other kinds of narratives.

Were there older people at Houghton who helped you make the transition to being an acquisitions editor?
I was there so long I kind of think of it in terms of eras. There was the Austin Olney-Nan Talese era, which is what I came into when I joined. And that was kind of old school. The nice thing was that there were editors who had too many books to edit and really wanted additional help. So I was able to pick up some work that I might not have had the chance to do otherwise. The next era was the Joe Kanon-John Sterling era. That was when I really began to take on books of my own, with John's encouragement, probably four or five years into the job. I was very fortunate because I did get the support of people who encouraged me to go out on my own and acquire, and that doesn't happen for everybody.

I never thought of myself as particularly ambitious for myself, but more for my writers. At a certain point I found that I became so invested in the books I was editing that it felt like a loss to turn them over to other people. The longer I'd been at the company and had a chance to see the way books were published, the more opinionated I became about what to publish, especially what kinds of books to publish. Houghton went through a lot of changes—grew and contracted, grew and contracted—but the one thing that I always felt about the list was that it had a certain kind of profile as being fairly conservative, especially in fiction—a little sleepy. Some of Nan's authors helped to change that profile: writers like Margaret Atwood, Ian McEwan, Valerie Martin. The authors she was publishing at Houghton are still the people she's publishing today, which is much to her credit. But it was a moment when the publishing world and the readership were changing and evolving, and it seemed like there was room on the Houghton list for different kinds of voices.

Like what?
More books by women. More books by ethnic writers. One of the first novels I acquired was by a young woman named Connie Porter, a young black woman who had graduated from the [Louisiana State University] graduate writing program. She had written a first novel called All-Bright Court, which was about a community of African Americans who had migrated up from the South after World War II when there seemed to be a lot of opportunity. The book was about this aspiring community of black workers who came to find that the promises they were given really didn't come through. And that book is still in print. The wonderful thing about it was that here was a young writer talking about a certain kind of community and experience that wasn't very well represented in the market.

Another example is a collection of stories by a young woman named Carolyn Ferrell called Don't Erase Me. Carolyn comes from a mixed background. Her mother is white and her father is black. The stories she wrote were very literary and ambitious and challenging in a particular way. Edward P. Jones is a writer whom I might compare her to. That book won the Los Angeles Times Book Prize. I just felt there was a need to hear from those kinds of voices—and that Houghton should be supporting writers like that.