“A scholar and jazz-like innovator.
A visionary of luminous detail, of histories,
of what he has felt and lived and observed.”

New York, NY – May 7, 2020 – Poets & Writers announced today that Ed Roberson is the recipient of the 2020 Jackson Poetry Prize. The prize is awarded annually by Poets & Writers to an American poet of exceptional talent. Endowed by John and Susan Jackson, the prize carries a monetary award of $70,000 and aims to provide what poets need: time and encouragement to write.

Three judges—acclaimed poets Nikky Finney, Anne Waldman, and Robert Wrigley—selected Roberson from a group of twenty nominees who, in turn, were nominated by twenty poets.

In their citation the judges noted, “This is an extraordinary time to be awarding this significant prize in poetry, a momentous time in our recent history, a time of panic, fear, uncertainty and inner turmoil, and devastating tragedy.” They said of Roberson that he is “both scholar and jazz-like innovator… Roberson’s poems work a way into your heart and consciousness, because he is a visionary of luminous detail, of histories, of what he has felt and lived and observed.” Read the full citation.

Asked what winning the Jackson Poetry Prize means to him, Mr. Roberson responded with a story. “Years ago, I got very sick,” he said. “A Nigerian woman in the kitchen with other family women said to my face, ‘You have big mind. You do great things maybe. But we love you. You need to take care of basic things too. You need to come in here and eat.’ They always made me eat. Ifeoma and her family probably saved my life. There have been others. This award is like that. It says, nice work, Ed, we love you, but you need this, to take care of some basic things too.” 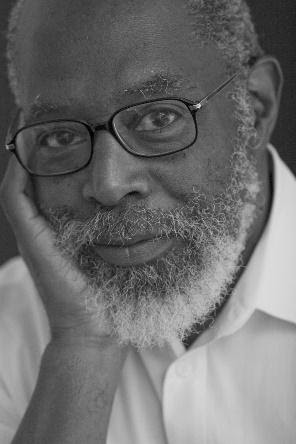 The fourteenth winner of the Jackson Poetry Prize, Ed Roberson is the author of ten books of poetry. His collection Asked What Has Changed is forthcoming from Wesleyan University Press in 2021. A gathering of new and selected work, MPH and Other Road Poems, is in preparation with Verge Books in Chicago, where he has lived since 2004. A former special programs administrator at Rutgers University’s Cook Campus, Roberson is now an emeritus professor in Northwestern University’s MFA creative writing program. He has also held posts at the University of Chicago, Columbia College, the University of California, Berkeley, and the Cave Canem retreat for black writers. His previous honors include the Ruth Lilly Poetry Prize, the Shelley Memorial Award, and the African American Literature and Culture Society’s Stephen Henderson Award.

While earning his undergraduate degree at the University of Pittsburgh, Roberson was a research assistant in limnology and traveled on expeditions through Canada, Alaska, the Kodiak and Afognak islands, and Bermuda. As an expedition member of the Explorers Club of Pittsburgh, he climbed mountains in the Peruvian and Ecuadorian Andes. Roberson has worked as a diver-tankman in the Pittsburgh AquaZoo, in steel mills, and in advertising graphics. He has motorcycled across the United States and has traveled in West Africa, Mexico, and the Caribbean.

Poets & Writers was founded in 1970 and has been the primary source of trustworthy information, professional guidance, support, and inspiration for writers for fifty years. Our work is rooted in the belief that literature is vital to sustaining a vibrant culture. We focus on nurturing literature’s source: creative writers. Our mission is to foster the professional development of poets and writers, to promote communication throughout the literary community, and to help create an environment in which literature can be appreciated by the widest possible public. In celebration of its 50th Anniversary, Poets & Writers affirmed its vision for the future: to empower creative writers and strengthen literary communities throughout the United States. Learn more at pw.org.