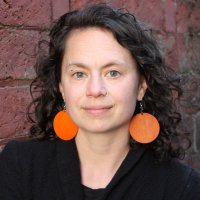 I’m at the pet store buying dog food and the counter is full of tarantulas. Seven of them, stacked in sturdy plastic bins with airholes punched along the tops, tiny nightmares from some haunted bulk foods department. Their meaty bodies spread-eagled on messy webs, kinetic in their stillness, like clenched muscles. I can’t stop staring—though if one of them moves, I will probably die.

For the better part of two years, my writing life has felt—not stuck exactly, but—suspended. Depression, an existential crisis, a lack of faith in the process, the usual debilitations. I’ve been able to work, but there’s a listlessness to my practice, the intrusive question of what good does this do? A poem, a book, my limited mind chasing its tail.

At home, I research tarantulas. Some are considered calm, even friendly—good beginner pets. When threatened, they hide or fling tiny hairs from their abdomens to irritate the eyes and skin of attackers. Kind of ridiculous, but it saves them from having to bite.

Why keep coming back to the page? It’s not pretty over here right now, but I’m trying my best to keep looking. Because fear—of spiders, death, of writing, not writing—can become the stuff of inspiration. Because under the fear there’s a drive that feels vital, which any animal would tell you not to ignore.
—Emily Van Kley, author of Arrhythmia (Persea Books, 2021)