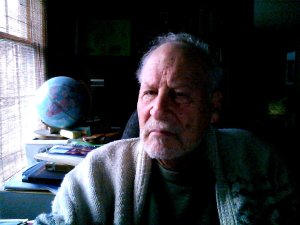 After service in the United States Marine Corps in the Vietnam War, Karlin co-edited the first collection of Vietnam veterans’ fiction from the war, Free Fire Zone: Short Stories by Vietnam Veterans, in 1973, and in 1995 was the co-editor, with Lê Minh Khuê and Truong Vu of the first collection of fiction by Vietnamese and American authors who had been on different sides in the war: The Other Side of Heaven: Postwar Fiction by Vietnamese and American Writers. He became the pro bono American editor of the Curbstone Press Voices from Vietnam series and introduced, adapted and edited novels and short story collections by contemporary Vietnamese authors, as well as a second anthology, Love After War, Contemporary Fiction from Viet Nam, co-edited with Hồ Anh Thái (2005); the anthology was simultaneously published in Vietnam as Tình yêu sau chiến tranh  (Hoi Nha Van-Writers; Association Publishing House, 2004). The series includes The Stars, The Earth, The River: Short Fiction by Lê Minh Khuê, (1997); Behind the Red Mist: Fiction by Hồ Anh Thái (1998); Against the Flood, a novel by Ma Văn Kháng (2000); Past Continuous, a novel by Nguyễn Khải (2001); The Cemetery of Chua Village and Other Stories by Đoàn Lê; (2005),  An Insignificant Family, by Dạ Ngân (2009). Karlin adapted and introduced two other books by Hồ Anh Thái: The Women on the Island (University of Washington Press, 2001) and Apocalypse Bell, (Texas Tech University Press. 2012) He also introduced, edited and adapted In Whose Eyes, a memoir by the major Vietnamese documentary film maker Tran Van Thuy, published in 2016 by the University of Massachusetts Press.

Film:  Karlin was one of the script writers, a technical consultant, and acted in the feature film Song of the Stork, a Vietnamese-Singaporean co-production (Megamedia, PTE, BHD Productions, 2002) which has won the Best Feature Film Award at the Milano Film Festival in 2002 and has been shown in other festivals in Belgium, Canada, the U.S. and Thailand.

Academic Career: Karlin retired as Professor Emeritus from the College of Southern Maryland in 2017, after thirty-one years of service. During his tenure, he served as professor of Languages and Literature and Coordinator of the Leonardtown Campus Languages and Literature Division. He taught a wide variety of composition and literature courses, including courses he developed on the (comparative) film and literature of the Vietnam War, Contemporary Novels, Ethnic American Literature, and Creative Writing-Fiction. In addition to lecture and presentation appearances at many other colleges, he has directed or co-directed and taught fiction workshops at the University of Massachusetts, Boston and at St. Mary’s College of Maryland, and travel courses on the comparative literature and film of the Vietnam War for New York University, St. Mary’s College of Maryland, and George Mason University. He was a co-founder and on-going coordinator and host of the College of Southern Maryland’s Connections Literary Readings Series, which since the 1990’s has brought local, nationally- and internationally-known writers to the college to read and discuss their work.  Karlin received the Faculty Excellence Award for 2013, and upon his retirement, the college faculty senate created the Wayne Karlin Award for Creative Writing, awarded to one student each semester. He has also developed the syllabus and directs a book discussion group for veterans under the auspices of the Maryland Humanities Council.

Radio: In 2006 and 2009 Karlin was a consulting producer and writer for Shared Weight, a series of hour-long radio programs involving interviews with American and Vietnamese writers, film makers and artists in the U.S. and in Vietnam, and journeys of reconciliation, produced by the Center for Emerging Media for National Public Radio. It was broadcast on over 40 NPR stations and is still in circulation.

Short fiction, essays and articles: Karlin's short stories have been anthologized in collections such as New Fiction from the South: The Best of 1993, edited by Shannon Ravenel (Algonquin);  Short Fiction: Classic and Contemporary, edited by Charles Bohner (Prentice Hall) ; The Vietnam War in American Stories, Songs, and Poems, edited by H. Bruce Franklin (Bedford/St.Martin). His work has appeared in various literary magazines, including Antietam Review, Crab Orchard Review, Dark Mountain, Gargoyle, Glimmer Train, Indiana Review, Kyoto Review, Manoa International Literary Journal, Michigan Quarterly, Nimrod, North American Review, Prairie Schooner, War, Literature & the Arts, and Witness. His essays have been included in various anthologies, including Patriots: The Vietnam War Remembered by All Sides, edited by Christian Appy (Penguin), and Thirty Years After: New Essays on Vietnam War Literature, Film and Art, edited by Mark Heberle (Cambridge Scholars). “The Twenty-fifth Platoon,” published in North American Review in 2004 was included in the “Best American Essays, 1986-Present” series by Assay: A Journal of Non-Fiction Studies. The landmark anthology These United States, published by Nation Books in 2003, featured Karlin’s essay about Maryland, and his essay “Kissing the Dead”, paired with Catherine Leroy's photographs, appeared in her book Under Fire: Great Photographers and Writers in Vietnam (Random House, 2005). Karlin’s book reviews have appeared in The Baltimore Sun, The Washington Post, and The Los Angeles Times. His article on Vietnam War Fiction, “Writing the War” was published by War, Literature & the Arts in 2019.

During his military service from 1963-1967, Karlin received the Combat Aircrew Badge with three stars, the Air Medal, a Presidential Unit Citation, the National Defense Service Medal, and the Vietnam Service Medal.

Karlin has received six Maryland State Arts Council Independent Artist Awards in Fic­tion (1988, 1991, 1993, 1997, 2002, 2022), two Fellowships from the National En­dowment for the Arts (1993, 2004), the Paterson Prize in Fiction for 1999, the Vietnam Veterans of America Excellence in the Arts Award in 2005, and the University of Massachusetts Juniper Prize for Fiction 2019 for his novel A Wolf by The Ears. Prisoners was named an Outstanding Novel in the 1998 Dictionary of Literary Biography Yearbook, The Wished-for Country was also selected as an Outstanding Novel in the 2002 Yearbook. The manuscript for a new novel, What Their Fathers Never Told Them, was a finalist for the 2021 PEN America Bellwether Prize for Socially Engaged Fiction.

Degrees: Karlin received a Bachelor of the Arts, Humanities, from the American College, Jerusalem in 1972, and a Master of Arts, Creative Writing (Fiction), from Goddard College, Vermont, in 1976.

Writing the War, in WAR, LITERATURE & THE ARTS: https://www.wlajournal.com/wlaarchive/31...

Comparison of the Best Books about the Vietnam War: https://shepherd.com/best-books/the-viet...

Six State of Maryland Individual Artist Awards in Fiction, two Fellowships from the National Endowment for the Arts (1994 and 2004), the Paterson Prize in Fiction for 1999, the Vietnam Veterans of American Excellence in the Arts Award in 2005, and the 2019 Juniper Prize for Fiction for A Wolf by the Ears.  The manuscript for his novel What Their Fathers Never Told Them was a finalist for the PEN America Bellwether Prize for Socially Engaged Fiction.

Gives readings:
Yes
Travels for readings:
Yes
Please note: All information in the Directory is provided by the listed writers or their representatives.
Last update: Dec 02, 2022
X