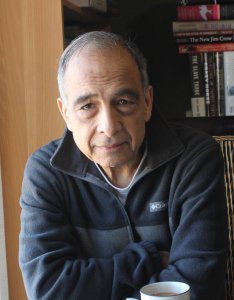 Waqas Khwaja was born in Lahore, Pakistan. He obtained his BA from Government College, Lahore, majoring in English Literature and Political Science, and LLB (Legum Baccalaureus) from the Punjab University Law College, Lahore. After receiving his license to practice law, he joined the Central Superior Services of Pakistan, where, on completion of his training at the Civil Services Academy of Pakistan at Lahore, he served in the Income Tax Department for about two years. Resigning from service, when his previously approved leave to study abroad on the Rotary Foundation Fellowship for Graduate Studies he had won in open competition was canceled by the military government that had seized power in a coup, he left the country to pursue the study of English and American literature at Emory University in Atlanta, Georgia, USA. There he remained for the next three years, completing his Ph.D. coursework and teaching introductory writing and literature courses to undergraduate classes during this period. At this time he was constrained to return to Pakistan owing to personal and family exigencies.

Back in Pakistan, he started his law practice and, over the next eleven years, established himself in the profession even as he continued to pursue his love of writing and literature by contributing to local and national papers, magazines, and journals, publishing his poetry and translations in English of literary works from local languages, while also running a writers’ group he had founded with two close associates and fellow writers. He was a regular contributor to The Frontier Post, The Pakistan Economic Review, The Pakistan Times, News International, The Nation, and The Friday Times during this period, publishing articles and essays on writers and literature from a variety of linguistic and cultural traditions as also on subjects as wide-ranging as education and economics, history, culture, and politics.

His breakthrough book of poems, Six Geese From a Tomb at Medum, was published by Sang-e-Meel Publications in 1987. The following year, an anthology of Pakistani literature titled Mornings in the Wilderness, comprising fiction and poetry by English-language writers as well as by some leading contemporary Urdu writers whose work he translated specifically for this publication, was released. With this he established himself also as an editor and translator. It brought him, that same year, recognition on a larger scale. He was awarded the fellowship of the International Writing Program at the University of Iowa, and he spent the fall semester based there, participating in the University seminars, sharing his work with students, writers, colleagues, and faculty of the University’s creative writing program, and becoming acquainted with the work of his fellow participants from Latin America, Africa, Asia, and Europe, as well as some influential contemporary American writers. In the later part of the program, he traveled with a small group of IWP writers to various cities across the United States giving readings, meeting local writers, and getting to know the literary scene in each of the places visited.

Upon his return to Pakistan, these experiences became the basis, first, of a series of articles he published over the next several months in the weekly literary edition of The Pakistan Times, and later, in 1990, of his book Writers and Landscapes, which too was released by Sang-e Meel. In 1993, Khwaja moved to the United States, but not before publishing another book of poems, Mariam’s Lament and other poems with Sang-e-Meel to some excellent reviews. He completed his Ph.D. in English in 1995 from Emory University with a dissertation titled The Aesthetics of Civilized Life: Interplay Between Artistic Design and the Truth of Experience in Thackeray’s Later Fiction–Pendennis, The Newcomes, and Philip. That very year in July, he joined the faculty of English at Agnes Scott College where he went on to chair the English department from 2004-2007, and where he has remained ever since.

Khwaja now holds an endowed chair at Agnes Scott College as the Ellen Douglass Leyburn Professor of English and teaches courses in Postcolonial World literature, British Romanticism, Narratives of Empire, Gothic literature, Victorian poetry and fiction, Literature and Leadership, and Creative Writing. Since 1995, he has published two further collections of poetry, No One Waits for the Train (Alhambra Publishing, Belgium, 2007) and Hold Your Breath (The Onslaught Press, Oxford, UK, 2017), and his work continues to receive widespread appreciation. His poems have appeared in US, Pakistani, Indian, African, European, East Asian and Far Eastern publications, literary journals, and anthologies.

Contributions in the area of translation, editing, and scholarship continue to diversify Khwaja’s output. He served as translation editor (and contributor) for Modern Poetry of Pakistan (Dalkey Archive Press, Urbana Champaign and London, 2011), an anthology, compiled under the general editorship of the celebrated Pakistani poet Mr. Iftikhar Arif, which showcases the work of 44 poets through nearly one hundred and fifty poems from seven of Pakistan’s national and regional languages, the consummation of a groundbreaking translation project sponsored jointly by the National Endowment of the Arts and the Pakistan Academy of Letters. This anthology was launched at various venues in the United States, Pakistan, and the UK and has been well-received by experts, reviewers and readers alike. During this period, Khwaja guest-edited a special issue of scholarly articles on Pakistani Literature for the Journal of Commonwealth and Postcolonial Studies (Vol. 16, No: 1, Spring 2009, published in 2011), and, a couple of years later, curated one dedicated to Pakistani poetry for Atlanta Review (Vol. XX, No: 2, Spring/Summer 2014). He was honored with the Outstanding Creative Writing award by the South Asian Literary Association (a professional association of academics and scholars of South Asian literature and literary studies based in the United States) at their annual conference in Philadelphia in 2017. In 2021, he was awarded the Laureate of the Arts Award by the Fundația Academia Internațională Orient–Occident, Romania, at the Curtea de Argeș Poetry Festival, and, in October 2022, with the Ditët e Naimit Literary Career Award, at the XXVIth Ditët e Naimit Poetry Festival held in Tetova, Macedonia, and Prizren, Kosovo.

Khwaja regularly organizes poetry readings at Agnes Scott College including, since 2013, an annual public celebaration of poetry with local and global participation as part of the international “100 Thousand Poets for Change” project founded by Michael Rothenberg and Terri Carrion.

Today I am a Muslim Weaver