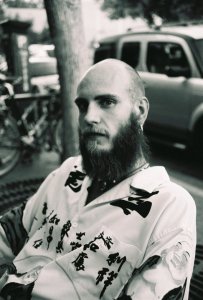 Starting their career as Houston, Texas’ premiere national poet and Grand Slam Champion of 2007, Seth Walker has earned titles in nearly every state in America at this point.

In November 2007 Seth Walker was Houston’s premiere national poet and had just claimed Grand Slam Champion, he then left Houston to follow his art and travel across the country to find it…

Since then Seth has performed at nearly every major venue in the country including Da Poetry Lounge (Hollywood, CA), The Green Mill (Chicago, IL), & The Nuyorican (New York, NY). Along the way he won several noteworthy titles such as: Slam Champion of the Utah State Arts Fair Poetry Slam (2009), North Beast Indie Slam Champion (North-Eastern Regional 2010), slamming with the 2010 Austin Poetry Slam Team, as well as as slamming with Denver’s Slam NUBA in 2012.

While traveling with rotating national artists, this notorious “road dog” poet traveled 10 to 11 months out of the year, dedicating his art to whomever he meets. In 2012 he took 1st place for Denver’s famous Cafe NUBA at the I.W.P.S. Competition, making Seth Walker their Individual World Poetry Slam Champion for 2012. Seth has been teaching and working with the Beyond Academia Free Skool since its beginning in 2012.

While traveling, Seth worked tirelessly to give back as much as possible to the communities that need it most by:

“Neobeat slam poet Seth Walker’s words were a perfect counterpoint to the message at hand. With lyrics that celebrated triumph of the spirit over the degradation of life circumstances, Walker engaged the audience and, hopefully, galvanized them to take up the cause even after the show was over,” wrote Melonie Magruder in The Malibu Times in Malibu, Calif.

“Floating above the seas of disposable ideas and so-called “news” presented by supposed “Fair and Balanced” hucksters, Seth Walker brings it real, raw and unrelentingly. His spoken word is emotional but not over-wrought; to the point but not simplistic. Seth Walker is a walkabout version of the evening news. In a world of false messengers, Seth is the real thing.”
Kenn Rodriguez | National Poetry Slam Champion

Seth Walker (aka Seth Walker Poetry) is the longest continually touring slam poet in America after touring the country for 5 years running.  He also produced and released the 1st 360 HD Poem on film in 2015.  He has been published in countless projects, magazines, and newspapers spanning 2007 to this day.

Gives readings:
Yes
Travels for readings:
Yes
Identifies as:
American
Prefers to work with:
Any
Fluent in:
English
Born in:
Baton Rouge, LA
Louisiana
Raised in:
Houston, TX
Texas
Please note: All information in the Directory is provided by the listed writers or their representatives.
Last update: Jun 29, 2021
X