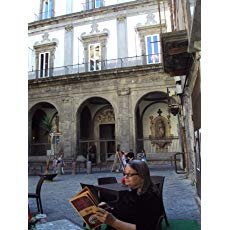 Sara Jacobelli grew up in the factory city of Bridgeport, CT and left home as a teenager to hitch-hike around the country. In New Orleans, she ran errands for the doormen, strippers, and other Bourbon Street denizens before going to work in restaurants and bars. She writes about the streets and characters she has met along the way, especially in New Orleans and San Francisco. She has worked numerous jobs, including dishwasher, bus girl, bartender, newspaper reporter, private investigator's assistant, and special education teacher. She currently is a librarian in the New Orleans Public Library. Her flash fiction and short stories have been published in various places, including 50-Word Stories, Postcard Shorts, FlashShot, Legends of Libation: Bartenders of North Beach, First Stop Fiction, Page & Spine, The Story Shack, Fiction on the Web, Drunk Monkeys, Bartleby Snopes, QuarterReads, Wattpad, Poetry Wall, Scarlet Leaf Review, The New Laurel Review, Letters Read: Regrets, Thursday Night Projects, One-Sentence Stories: an Anthology of Stories Told in a Single Sentence (Book #1),  Book #2 One-Sentence Stories: Intriguing New Anthology of Stories Told in a Single Sentence, Book #3 One-Sentence Stories,  Jambalaya 2016 and 2017, Dante's Parking Ticket by the Iowa Writers Guild and The New York Times Metropolitan Diary. In the early 90s, she was the editor and a major contributor to the popular zine, The Dagger. In the late 90s, she was a reporter for the controversial Northern California weekly newspaper, The Anderson Valley Advertiser (AVA). She has read her stories on WRBH Radio in New Orleans. She is a playwright, and her plays have been performed at the Contemporary Arts Center, The Theatre at St. Claude, and Cafe Istanbul. Her play, "Make Your Pet a Celebrity! and Four Short Plays" was featured at the 2018 New Orleans InFringe Festival. A video from this play, "Make Your Pet a Celebrity!" has been screened at MicroCinema. She has taught flash fiction and short story writing workshops at the New Orleans Public Library and at the Jambalaya Writers Conference in Houma, LA. She hosts the Barcartion! Reading Series at BJs Bar in the Bywater. She is a regular volunteer at the New Orleans Tennessee Williams Literary Festival.

"Half Moon Bay" named as Fiction on the Web's May 2014 Short Story of the Month.

Make Your Pet a Celebrity!