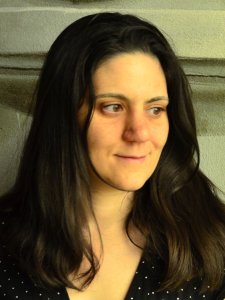 Rowyda Amin is the author of the poetry chapbooks Desert Sunflowers (flipped eye, 2014)and We Go Wandering at Night and Are Consumed by Fire (Sidekick Books, 2017).

Rowyda has performed at UK and international venues including the Ledbury Poetry Festival, the Westbeth Artists' Community, the Brighton Festival, the Victoria and Albert Museum and the Royal Festival Hall.

She has a master's degree in Modern and Contemporary Literature from the University of London and has reviewed books for Modern Poetry in Translation, the Poetry Book Society website and drfulminare.com.

She was born in Newfoundland, Canada to parents of Saudi Arabian and Irish origin, has lived in Riyadh and London and is now based in New York City. Her name is pronounced roe-why-da a-meen.