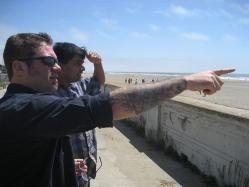 Noah Eli Gordon is the author of eight books, including The Year of the Rooster (Ahsahta Press, 2013), The Source (Futurepoem, 2011), and Novel Pictorial Noise (Harper Perennial, 2007), which was selected by John Ashbery for the National Poetry Series and subsequently chosen for the San Francisco State Poetry Center Book Award.

Gordon is the co-publisher of Letter Machine Editions, an editor with The Volta, and an Assistant Professor in the MFA program in Creative Writing at The University of Colorado–Boulder, where he currently directs Subito Press.

An advocate of small press culture, he penned a column for five years on chapbooks for Rain Taxi: review of books, ran Braincase Press, and was a founding editor of the little magazine Baffling Combustions.