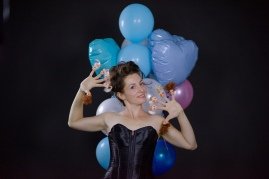 Nicelle Davis is a California poet, collaborator, and performance artist who walks the desert with her son J.J. in search of owl pellets and rattlesnake skins. Her poetic obsession is with location–locating oneself in time and place—the power of proximity and the efforts of exchange. She enjoys experiencing, even playing with, the temporal as a gift and a curse. Every moment fully lived is a blend of emotions—She looks for such overlaps, paradoxes, and between spaces. She is located in the Antelope Valley, meaning she is situated between religious compounds, rehabilitation centers, prisons, schools, aerospace, and Joshua Trees. This isn’t an easy place to live, but she loves it. In the tradition of assemblage artists such as Noah Purifoy, she likes to work with artist (a.k.a. desert rats) in her community to explore desert culture and its importance to global social, political, and ecological issues.

Her most recent collection, The Walled Wife, is available from Red Hen Press. She is the author of three previous collections including In the Circus of You (Rose Metal Press, 2015) Becoming Judas, (Red Hen Press, 2013) and Circe, (Lowbrow Press, 2011). My e-chapbook, Studies in Monogamy, can be read (and heard) at A Whale Sound. She is currently working on the manuscript / play, On the Island of Caliban which was recently produced by The Industrial Players.

Davis’s methods are rooted in cross-media and performance. With each poem written she communicates not only through the by-product of words, but through their arrangement, shape, and the acute dismantling of expectation. Davis teaches us to be with a poem, to join intimately with those stories we tell so that we may reconstruct the myths we create into the lives that we live. For Davis there is always limitation. However, through her use of multiple medias and new collaborators, Davis paves new paths for authors. Addressing how poets balance the double life of a poem, how to negotiate the effects that are lost or gained when transitioning from one medium to another, Nicelle Davis explores how poetry can have a life beyond the page.

She has collaborated on several poetry films. “The First Hour of Being Buried Alive in the Walls of a Half-Built Cathedral” poetry Video was created as a collaboration at The Room of Her Own Foundation Retreat at Ghost Ranch, New Mexico, 2013 with Anita Clearfield. You can also watch her students bury her alive with a recorded live performance, The Walled-up Wife Retold.

Nicelle Davis is also the director of The Living Poetry Project. In attempts to have poetry everywhere and anywhere, The Living Poetry Project endeavors to build community by collaborating with students and artists with the hope of introducing people to art. That is, giving poems to construction workers; or surprising shoppers with hidden poems in the pockets of jeans on a store’s sale rack; burning a Rumi poem into small pieces of wood left scattered in a restaurant; or writing a poem on a T-shirt and give it away. Included in this is the creation of The Poetry Circus. The Living Poetry Project reimagines poetry’s influence within the everyday, waiting to enliven and deepen a momentary and isolated experience. Check out The Living Poetry Project on The Bees Knees blog.

She has taught poetry at Youth for Positive Change, an organization that promotes success for youth in secondary schools, MHA, and with Volunteers of America in their Homeless Youth She is the recipient of the UCR Creative Writing Graduate Division Fellowship (2007), the Squaw Valley Community of Writers, UC/ Riverside scholarships for UCR MFAs (2008). Recently she was the recipient for the AROHO retreat 9 3/4 fellowship; she is honored to work as a consultant for this important feminist organization. She currently (and gratefully) teaches at Paraclete High School.

Gives readings:
Yes
Travels for readings:
Yes
Prefers to work with:
Any
Fluent in:
English
Born in:
Ogden
Raised in:
Layton, UT
Utah
Please note: All information in the Directory is provided by the listed writers or their representatives.
Last update: Dec 01, 2015
X