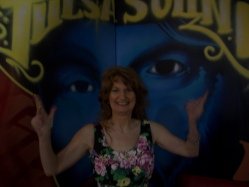 Accepted as "Poet" on official Directory of Poets & Writers by PW.org since 2016.

Accepted as "Spoken Word Artist" on official Directory of Poets & Writers by PW.org since 2012.

4 POEMS PUBLISHED IN HARD-BOUND ANTHOLOGY BOOKS AT THE LIBRARY OF CONGRESS (all at no cost to poet):

“See Navigating” published in hard cover book of only nominated and selected poets (1 per page) (by invitation and at no cost to the poet) International Who's Who in Poetry 2012 Library of Congress ISBN 978-1-61936-065-5 (Poet owns copyright poem);

Gives readings:
Yes
Travels for readings:
Yes
Identifies as:
White
Prefers to work with:
Adults
Fluent in:
English
Born in:
Thierville FRANCE
France
Raised in:
N/A
Please note: All information in the Directory is provided by the listed writers or their representatives.
Last update: Jun 22, 2016
X