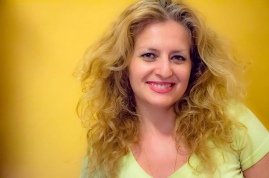 Marina Rubin was born in the small town of Vinnitsa, Ukraine, in the former Soviet Union. Her family immigrated to the United States in 1989 seeking asylum. She graduated from Pace University with a Degree in Psychology and minor in Women's Studies. Her first chapbook Ode to Hotels came out in 2002 and was followed by Once (2004) and Logic (2007). Marina Rubin’s work has appeared in over eighty magazines and anthologies, including 13th Warrior Review, Dos Passos, 5AM, Fiction on the Web, Westchester Review, Coal City, Gravel, Newfound, Jewish Currents, Lillith, Pearl, Skidrow Penthouse, and The Worcester Review. She is an Associate Editor of Mudfish, the Tribeca literary and art magazine and a 2013 recipient of the COJECO Blueprint Fellowship. Her collection of flash fiction "Stealing Cherries" was released from Manic D Press to rave reviews and received an honorable mention on Heeb Magazine’s list of Best Books of 2014. “One of the richer contemporary visions of America I’ve read," said Nano Fiction and Coachella Valley Independent compared Marina Rubin to David Sedaris.

One of "Knockout Beauty and Other Afflictions" centerpiece stories "Man in a Fedora" was recorded as an-hour long podcast, reminiscent of classic radio productions, that involved 11 voice actors of the Nightshift Radio Storyteller Series.

Marina Rubin has given readings in New York (Cornelia Café, JCC Amsterdam, The Midland JCC Long Island, The Hamptons Synagogue, Rodeph Congregation Central Park West, etc) and has traveled to other states as part of the JBC book tour.

She has appeared as a Featured Author representing her home country of Ukraine at the "6 Nights at the Museum" Reading Series held at Temple Emanu El.

Marina Rubin has been on the cover of the Arts Section of Jewish Week twice - once as a featured artist and the second time as part of an ensemble of writers in the issue The Next Wave of Russian-Jewish Literature.

In addition to writing, Marina Rubin is an avid mountaineer, having summited Kilimanjaro, made it to Everest Base Camp, completed Tour du Mont Blanc and Camino de Santiago.

She lives in Brooklyn.

Marina Rubin is a 2013 recipient of COJECO Blueprint Fellowship.

She attended Pace University on a Writing Scholarship from the United Federation of Teachers (UFT).

While a student at Pace, she was a three-time recipient of Sarah Willis Creative Writing Award.

Her poetry was nominated for the Pushcart Prize in 2007 and again in 2012.

Her book of flash fiction "Stealing Cherries" received an Honorable Mention on the list of Best Books of 2014 from Heeb Magazine.

Her short story "Jupiter" was nominated for the Best of the Net 2021.

Gives readings:
Yes
Travels for readings:
Yes
Identifies as:
American
Prefers to work with:
Adults
Fluent in:
English
Born in:
Vinnitsa
Ukraine
Raised in:
Brooklyn, NY
New York
Please note: All information in the Directory is provided by the listed writers or their representatives.
Last update: Feb 09, 2022
X