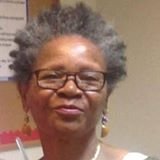 She has a Master of Science Degree in Mental Health Counseling, a BS in Psychology and a Certificate  of Specialization in Thanatology (grief and bereavement). She resides in New York City.