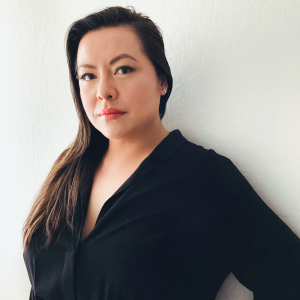 Lisa Lee Herrick is the daughter of Hmong refugees and an award-winning Hmong-American writer, illustrator, and producer based in California. She co-founded Fresno’s LitHop literary arts festival after a decade working in journalism and television. She has been featured in and/or appeared on PBS, NPR, FOX, ABS-CBN, The Fresno Bee, the Houston Chronicle and others. Today, she is the editor at large for Hyphen magazine and a regular contributor to The Rumpus, and advises nonprofit arts & public broadcasting organizations in media strategy and community outreach.

Her creative nonfiction is honored in the Best American Essays (2020-2021) and Best American Food Writing 2020. In 2019, she was selected for a Writing X Writers fellowship at the Esalen Institute in California and named a finalist for the Paper Darts Short Fiction Prize. The following year, she was a finalist for the 2020 Ploughshares Emerging Writers’ Contest and longlisted for a Creative Capital Award. In 2021, Lisa was awarded a PEN America Emerging Voices Fellowship and paired with best-selling Hmong American writer Kao Kalia Yang as her mentor, and named a finalist for the Restless Books Prize for New Immigrant Writing. She is currently revising her memoir in essays, and working on a new essay collection on nature & society as well as collaborating on a topical graphic novel anthology. Her newest work will premiere in the anthology Nonwhite and Woman from Woodhall Press in September 2022.

She has a B.A. in Comparative Literature from the University of California, Davis, where her first published personal essay is permanently archived in the Department of English’s Prized Writing catalogue.

If you missed her conversation about narrative structure, craft, and cultural writing with Courtney Maum (Before and After the Book Deal) for The Mount - Edith Wharton House, watch the recording here: https://www.edithwharton.org/prerecorded...

Discover more online at www.lisaleeherrick.com, and subscribe to the LIBROVORE newsletter for deep dives in cultural production.

Gives readings:
Yes
Travels for readings:
Yes
Identifies as:
American, Asian American, Feminist, LGBTQ, Other, Southeast Asian
Prefers to work with:
Any
Fluent in:
English
Born in:
OR
Oregon
Raised in:
CA
California
Please note: All information in the Directory is provided by the listed writers or their representatives.
Last update: Apr 07, 2022
X