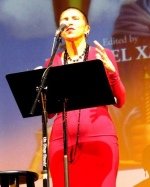 Lisa Alvarado is an educator, poet, novelist, and journalist, the founder of La Onda Negra Press, author of Reclamo and The Housekeeper’s Diary; originally a book of poetry and now a one-woman performance. Her first novel, Sister Chicas, Penguin/NAL, was released in April 2006. The novel is a coming of age story concerning the lives of three young Latinas living in Chicago. It won 2nd place, Best First Novel in English. (Latino Literacy Now/2007)

Her book of poetry, Raw Silk Suture, released by Floricanto Press in 2008, was positively reviewed by Rigoberto Gonzalez. She has curated multimedia exhibits, mounted her own multimedia piece, Reclamo, in the Pilsen art corridor in Chicago; and is currently a contributor to the nationally touring exhibit, Re-imagining the Distaff Toolkit, curated by Ricki Solinger/SUNY.

Lisa is the recipient of grants from the Department of Cultural Affairs, The NEA, and the Ragdale Foundation. In Fall, 2009, she was awarded Hispanic Author of the Year by the State of Illinois. In 2010, she contributed to HaLapid, The Journal for the Study of Crypto-Judaism. In 2011, she contributed to Me No Habla with Acento, edited by Emanuel Xavier, and released by Rebel Sartori Press, and Still, Life, essays and poetry.

Hispanic Author of the Year 2009, State of Illinois