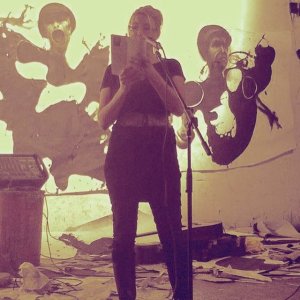 In 2018, she was a panelist at the Association for the Advancement of Baltic Studies (AABS) conference at Stanford University, where she presented her cinepoems from the collection, White Stockings (in collaboration with visual artist, Tess Cortes).

In 2013, she was selected by Eleni Sikelianos for the Henry Miller Memorial Library Ping Pong Journal Award.

In 2009, she was selected by Brenda Hillman for The Poetry Center of Chicago’s Juried Reading Award, and she was also nominated by Another Chicago Magazine for an Illinois Arts Council Award in 2009.

In 2000, she earned an M.A. in Creative Writing from Wright State University, where she participated in a summer workshop with Nikky Finney, the 2012 National Book Award Winner in Poetry. She has served as the Chicago Poetry Correspondent of OmniVerse.

Lina was a faculty member and the marketing director at the Chicago School of Poetics, as well as the co-editor/designer of the 15-year-running online literary magazine, milk magazine (featuring Robert Creeley, Wanda Coleman, Ron Padgett, Michael McClure, and Japanese surrealist, Yamamoto Kansuke, among others).

Identifies as:
Canadian, Lithuanian American
Born in:
Raised in:
Chicago, IL
Illinois
Please note: All information in the Directory is provided by the listed writers or their representatives.
Last update: Aug 17, 2020
X