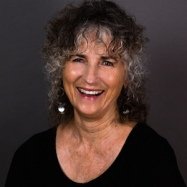 Lily Iona MacKenzie has crossed many borders in her life, moving from Calgary, Canada, to the San Francisco Bay area as a young woman. An avid traveler, she has journeyed all over the world, just recently completing a trip to Scandinavia, St. Petersburg and Moscow.

She also travels every night to exotic places and has kept a dream journal for many years. These experiences inseminate her writing, which ranges from poetry, short and long fiction (she’s written four novels), non-fiction (she has a collection of essays), to children’s stories. For two years, she co-created a radio program called “Aunt Sally’s Story Shoppe” in Marin County. She and her partner adapted traditional fairy tales and myths, as well as their own stories, for an audience of children and adults.

A high school dropout and a mother at 17, she once was a groupie, hanging out with Ronnie Hawkins and the Hawks. Levon Holmes and Robbie Robertson were then part of the group before they created The Band with Bob Dylan.

Over the years, she has supported herself as a stock girl in the Hudson’s Bay Company, as a long distance operator for the former Alberta Government Telephones, and as a secretary (Bechtel Corp sponsored her into the States). She also worked as a cocktail waitress at the Fairmont Hotel in San Francisco, briefly broke into the male-dominated world of the docks as a longshorewoman (she was the first woman to work on the SF docks and almost got her legs broken), founded and managed a homeless shelter in Marin County, and eventually earned two Master’s degrees (one in English with an emphasis on Creative writing and one in the Humanities). She taught writing part-time at the University of San Francisco for over 30 years and was vice-president of the part-time faculty association.

All of the arts inspire her, and she dabbles in painting and assemblage when she isn’t writing, messing around in her garden, working out at the gym, or spending time with her husband.

What I'm reading now:
How To Read a Poem and Fall in Love with Poetry by Edward Hirsch, A Poet's Craft by Annie Finch, Quick Question by John Ashbery , American Hybrid by Cole Swenson & David St. John

Gives readings:
Yes
Travels for readings:
Yes
Identifies as:
White
Prefers to work with:
Adults
Fluent in:
English
Born in:
Edmonton
Canada
Raised in:
Calgary, AB
Canada
Alberta
Please note: All information in the Directory is provided by the listed writers or their representatives.
Last update: Sep 08, 2016
X