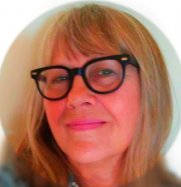 Lillian Ann Slugocki, founder of BEDLAM, has been nominated for Best of the Web, a Pushcart Prize, winner of the Gigantic Sequins prize for fiction, and a finalist for the Glass Women Award. She’s been published by Seal Press, Cleis Press, Heinemann Press, Newtown Press, Spuyten Duyvil Press, as well as Bloom/The Millions, Salon, Beatrice, THE FEM Literary Magazine, HerKind/Vida, Deep Water Literary Journal, The Nervous Breakdown, The Doctor T.J. Eckleburg Review, Blue Fifth Review, Non Binary Review, The Manifest-Station, BUST Magazine, HYPERtext Magazine, and The Daily Beast. She has an MA from NYU in literary theory, and has produced and written for Off-Broadway and National Public Radio. How to Travel With Your Demons, a novella, Spuyten Duyvil Press, 2015, chosen for the Dr. T.J. Eckleburg Book Club. Her other books are The Blue Hours, and The Erotica Project, co-author, Erin Cressida Wilson. Anthologies include Wreckage of Reason 2: Back to the Drawing Board and Dirty Girls. Her work has been reviewed in The New York Times, The Village Voice, Art in America, The New Yorker, The Daily News, The New York Post, Time Out, The Guardian, The Daily Telegraph, The London Sunday Times.

Nominated for Best of the Web, a Pushcart Prize, and Gigantic Sequins Prize for fiction.

Gives readings:
Yes
Travels for readings:
Yes
Identifies as:
Feminist
Prefers to work with:
Adults
Fluent in:
English
Born in:
Great Lakes Naval Base
Raised in:
Kenosha, WI
Wisconsin
Please note: All information in the Directory is provided by the listed writers or their representatives.
Last update: Nov 25, 2017
X