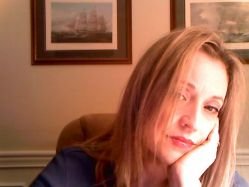 Leah Maines has served as the senior editor for Finishing Line Press since she took over the press in 2002. She has edited over 600 poetry collections, including several award-winning titles. She is former Poet-in-Residence of Northern Kentucky University (funded in part by the Kentucky Humanities Council and the National Endowment for the Humanities). Maines is the author of two poetry books. Her first book was nominated for the Pushcart Prize and the Williams Carlos Williams Book Award (Poetry Society of America). Looking to the East with Western Eyes, New Women's Voices Series, No. 1 (Finishing Line Press, 1998) reached #10 in the "Cincinnati/Tri-State Best Sellers List" (Cincinnati Enquirer), and is now in its fourth printing. Her most recent collection, Beyond the River, (KWC Press, 2002, 1st edition) won the Kentucky Writers' Coalition Poetry Chapbook Competition in 2002. Her poems have appeared in numerous national and international publications including Nebo, Owen Wister Review, Licking River Review, Flyway and other literary magazines and anthologies. Maines lived in Gifu, Japan where she studied and researched classical Japanese poetry at Gifu University. She also studied at Kings College London, England and The Marino Institute in Dublin, Ireland. Leah lives with her husband and children in Central Kentucky. She is an avid golfer, and collects golf balls (and poetry chapbooks) from around the globe.

Here are some of the award-winning titles I have edited:

•Deborah Gordon Cooper's chapbook Between the Ceiling & the Moon received the Honorable Mention Prize in poetry at the Northeastern Minnesota Book Awards. www.d.umn.edu/lib/nemba

•Carol Hamilton's Shots On was selected as a finalist in the 20th Annual Oklahoma Book Award Competition.
•Carolyn Howard-Johnson’s chapbook Tracings was the WINNER of the Silver Award for Excellence by the Military Writers Society of America.

Beyond the River, Winner of the Kentucky Writers' Coalition Chapbook Competition.

Gives readings:
Yes
Travels for readings:
Yes
Identifies as:
Jewish, Christian
Prefers to work with:
Any, Any
Fluent in:
Japanese
Born in:
Cincinnati
Raised in:
Covington, KY
Kentucky
Please note: All information in the Directory is provided by the listed writers or their representatives.
Last update: Jun 09, 2011
X