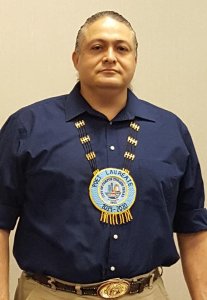 Juan Manuel Pérez, a Mexican-American poet of indigenous descent and the current Poet Laureate for Corpus Christi, Texas (2019-2020), is the author of Another Menudo Sunday (2007), O' Dark Heaven: A Response to Suzette Haden Elgin's Definition of Horror (2009), WUI: Written Under the Influence of Trinidad Sanchez, Jr. (2011), Live From La Pryor: The Poetry of Juan Manuel Perez: A Zavala Country Native Son, Volume 1 (2014), Sex, Lies, and Chupacabras (2015), Space In Pieces (2020), and Screw The Wall! And Other Brown People Poems (2020), as well as, the co-editor of The Call Of The Chupacabra (2018). He is the 2011-2012 San Antonio Poets Association Poet Laureate and the Lone Star State's only EL Chupacabras Poet Laureate (For Life). The former Gourd Dancer for the Memphis Tia Piah Big River Clan Warrior Society is also a Pushcart Prize Nominee as well as a SEATTAH Scholar (Striving For Excellence And Accountability In The Teaching Of Traditional American History) through the University Of Dallas. Juan is a ten-year Navy Corpsman/Combat Marine Medic with experience in the 1991 Persian Gulf War (Operations Desert Shield, Desert Storm, and Desert Calm) with the 2nd Marines and the 1992 Hurricane Andrew Relief Marine Air Group Task Force.  This two-time Teacher of the Year, along with his wife, Malia (a three-time Teacher of the Year), is a co-founder of The House of the Fighting Chupacabras Press. The former migrant field worker previously from La Pryor, currently, worships his Creator, teaches public high school history, writes poetry, and chases chupacabras in the Texas Coastal Bend Area.

He has been a featured reader at many poetry venues in Texas and across the country. He is available for readings anywhere within reason.

Juan writes poetry on a variety of subjects like Mexican-American/Native American life, comic books, science fiction, horror, and food. His individual poems have aappeared in to many anthologies, websites, etc to list.

Aside from poetry, Juan has done stage acting, independent films, and voice over audio plays.

See some work at the following sites:

Gives readings:
Yes
Travels for readings:
Yes
Identifies as:
Mexican, Native American
Prefers to work with:
Any
Fluent in:
English, Spanish
Born in:
Crystal City, TX
Texas
Raised in:
La Pryor, TX
Texas
Please note: All information in the Directory is provided by the listed writers or their representatives.
Last update: Sep 13, 2020
X