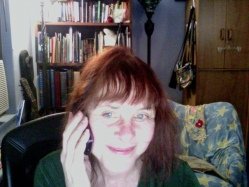 Primarily a poet and performance poet, I coined the term, "Bluetry" to define my art. Bluetry grew out of people approaching me after readings to either compliment me or complain my poems were too sad. Born in a small, ethnically diverse neighborhood in Washington Heights, I survived adversity. I wrote my first poem at 4 years old about snowflakes. My striving to thrive and excel has permeated my existence. My drive to write, create and share, defines my art. I write because I have no choice. My performances are an extension of my art, evolving like a child develops in the womb and his mother gives birth to him.

I’ve been performing “Bluetry” since December 2008, when I first felt inspired to read with music. Bluetry fell into place in developmental stages, defining itself. A fellow poet and friend, Demetrius Daniel, a trombonist, accompanied me at readings. Simultaneously, before I’d written my first Bluetry, DubbleX told me wanted to play melodica on a stage like back in the day. Naturally, I invited him to accompany me whenever I featured. Thus Bluetry was born.

Around this same time I went to many private house parties where guests were primarily musicians. During one, the host of the party performed first, combining singing with dancing. Afterwards, musicians drift off to various rooms while others stick to the main room. While people wait for the host to perform, there’s typically a lot of improvising in groups.

During this interim jazz jam period while waiting for the main performance, the music inspired me to read the first of my Bluetry series, “I Sing The Blues For You.” By the time I’d finished, everyone had returned to the main room to watch. Since our host was still getting ready, I performed another song, thus my “Bluetry” style was born: an outcast poet, outcast Jew, performing “outcast blues, my mother sang them before me,”*

Sometimes musically it is disconcerting when I find myself at a club with four or five musicians playing varied instruments, maybe even a drummer. In spite of these and other drawbacks, like mics placed improperly, my Bluetry hit a new note on the poetry scene and garnered attention.

Always on the edge, back in the early 90’s, I performed narrative poetry and was often told by other poets that my work was not poetry. Now, many spout narrative rhyme, and some stick to form and write about nature and God. I’m off to something different. Taking artistic risks defines me.