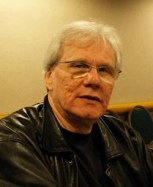 JACK DANN has written or edited over seventy-five books, including the international bestseller The Memory Cathedral, The Rebel, The Silent, Junction, and The Man Who Melted. He is a recipient of the Nebula Award, the World Fantasy Award, the Australian Aurealis Award (three times), the Ditmar Award (five times), the Peter McNamara Achievement Award and also the Peter McNamara Convenors’ Award for Excellence, the Shirley Jackson Award, the Chronos Award, the Darrell Award for Best Mid-South novel, and the Premios Gilgames de Narrativa Fantastica award. He has also been honoured by the Mark Twain Society (Esteemed Knight).

Dann’s work has been compared to Jorge Luis Borges, Roald Dahl, Lewis Carroll, Castaneda, Ray Bradbury, J. G. Ballard, Mark Twain, and Philip K. Dick. Philip K. Dick, author of the stories from which the films Blade Runner and Total Recall were made, wrote that “Junction is where Ursula Le Guin’s Lathe of Heaven and Tony Boucher’s ‘The Quest for Saint Aquin’ meet...and yet it’s an entirely new novel.... I may very well be basing some of my future work on Junction.”

Library Journal has called Dann “…a true poet who can create pictures with a few perfect words.” Roger Zelazny thought he was a reality magician and Best Sellers has said that “Jack Dann is a mind-warlock whose magicks will confound, disorient, shock, and delight.” The Washington Post Book World compared his novel The Man Who Melted with Ingmar Bergman’s film The Seventh Seal.

Dann’s major historical novel about Leonardo da Vinci—entitled The Memory Cathedral—won the Australian Aurealis Award, was #1 on The Age bestseller list, and a story based on the novel was awarded the Nebula Award. The Memory Cathedral was also shortlisted for the Audio Book of the Year, which was part of the Braille & Talking Book Library Awards.

Morgan Llwelyn called The Memory Cathedral “a book to cherish, a validation of the novelist’s art and fully worthy of its extraordinary subject.” The San Francisco Chronicle called it “A grand accomplishment,” Kirkus Reviews thought it was “An impressive accomplishment,” and True Review said, “Read this important novel, be challenged by it; you literally haven’t seen anything like it.”

Dann’s novel about the American Civil War, The Silent, was chosen as one of Library Journal’s ‘Hot Picks’. Library Journal wrote: “This is narrative storytelling at its best—so highly charged emotionally as to constitute a kind of poetry from hell. Most emphatically recommended.” Peter Straub said “This tale of America’s greatest trauma is full of mystery, wonder, and the kind of narrative inventiveness that makes other novelists want to hide under the bed.” And The Australian called it “an extraordinary achievement.”

His novel Bad Medicine (titled Counting Coup in the U. S.), a contemporary road novel, has been described by The Courier Mail as “perhaps the best road novel since the Easy Rider Days.”

The West Australian called Dann’s novel, The Rebel: an Imagined Life of James Dean “an amazingly evocative and utterly convincing picture of the era, down to details of the smells and sensations—and even more importantly, the way of thinking.” Locus wrote: “The Rebel is a significant and very gripping novel, a welcome addition to Jack Dann’s growing oeuvre of speculative historical novels, sustaining further his long-standing contemplation of the modalities of myth and memory. This is alternate history with passion and difference.”

Dann’s short stories have been collected in Timetipping, Visitations, Promised Land (a companion volume to The Rebel), and the retrospective short story collection Jubilee: the Essential Jack Dann. The West Australian said it was “Sometimes frightening, sometimes funny, erudite, inventive, beautifully written and always intriguing. Jubilee is a celebration of the talent of a remarkable storyteller.” His collaborative stories can be found in the collection The Fiction Factory. A collection of Dann’s stories for the Masters of Science Fiction Series (Centipede Press) is forthcoming.

The Rebel, The Silent, The Man Who Melted, and Promised Land are available from Audible as audio books.

Dann is also the co-editor (with Janeen Webb) of the groundbreaking Australian anthology Dreaming Down-Under, which Peter Goldsworthy called “the biggest, boldest, most controversial collection of original fiction ever published in Australia.” It won Australia’s Ditmar Award and was the first Australian book ever to win the World Fantasy Award. He has also edited a sequel to Dreaming Down-Under: Dreaming Again. The influential Bookseller+Publisher gave Dreaming Again a five star rating and wrote: “Here are stories that engage with the building blocks of our culture and others that give shape to our shared darkness and light. Dreaming Again is at once quintessentially Australian and enticingly other. If you read short fiction you’ll want this collection. If you don’t, this is a reason to start.”

Other publications include: the short novel The Economy of Light; the autobiography Insinuations; and a special edition reprint of Dann’s 1981 novel Junction. He is the co-editor, with Nick Gevers, of Ghosts by Gaslight, which won the Shirley Jackson Award and the Aurealis Award. His 34 volume Magic Tales anthology series, edited with Gardner Dozois, is now available in ebook format. In her introduction to Dann’s latest short story collection Concentration, critic and scholar Marleen Barr writes: “Dann is a Faulkner and a Márquez for Jews. His fantastic retellings of the horror stories Nazis made real are more truth than fantasy.”

As part of its Bibliographies of Modern Authors Series, The Borgo Press has published an annotated bibliography and guide entitled The Work of Jack Dann. An updated second edition is in progress. Dann is also listed in Contemporary Authors and the Contemporary Authors Autobiography Series; The International Authors and Writers Who’s Who; World Who’s Who, Personalities of America; Men of Achievement; Who’s Who in Writers, Editors, and Poets, United States and Canada; Dictionary of International Biography; the Directory of Distinguished Americans; Outstanding Writers of the 20th Century; and Who’s Who in the World. His Wikipedia entry can be found at https://en.wikipedia.org/wiki/Jack_Dann.

Dann is the managing director of PS Australia, and his latest anthology Dreaming in the Dark—the first volume in the new line—won the 2017 World Fantasy Award. He has also been granted the degree of Doctor of Philosophy by The University of Queensland and is an Adjunct Senior Research Fellow in the School of Communication and Arts.

Forthcoming  is the Renaissance fantasy novel Shadows in the Stone.