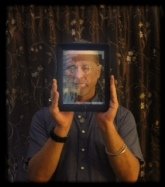 Ishmael von Heidrick-Barnes is an award winning poet and editor with experience in cross-cultural artistic collaborations. He has college degrees in Religion and Theology and Surgical Technology. His writings have been translated into German and Spanish.  Ishmael has worked and studied with Dr. Sam Hamod and the late San Diego poet Linda Brown.  Ishmael's personal websites are:  http://vonheidrickbarnes.com  and  https://www.geopoeticspaces.com.

Ishmael collaborated with German artist Roger Rigorth in 2008 with the show entitled, "Personal Geography," at LA Artcore Brewery Annex and at the 2013 Environmental Art Biennale at I-Park in Connecticut.

Ishmael's first volume of poems INTIMATE GEOGRAPHY: POEMS was published in June 2012 by Ragged Sky Press in Princeton, NJ. The book won the 2012 San Diego Book Award for Best Published Poetry and is available on Amazon.com, Barnes&Noble.com, and Ragged Sky Press, links below.

Ishmael's 2016 book URBAN LEGENDS is a collaboration of drawings and poetry with the renowned Cypriot fine artist, Tatiana Tavoukjian Ferahian. The book was published in Nicosia, Cyprus, by Moufflon Publications (Moufflon Bookshop, linked below) and won a 2017 Bronze Medal from the Pygmalion Awards. URBAN LEGENDS was selected for exhibition at the Spine Exhibit of Artists' Books in Nicosia, Cyprus, and the 2017 European Capital of Culture exhibition "Life After Death" in Paphos, Cyprus.  It was also showcased in 2017 at the Cyprus Folk Art Museum in Nicosia, Cyprus. In 2018 the Cypriot Cultural Ministry invited Ms. Ferahian and Ishmael to present URBAN LEGENDS at the House of Cyprus at the Cypriot Embassy in Athens, Greece.  Ishmael and Ms. Ferahian collaborated on an installation of art and poetry, "Butterfly Effect," which was selected for the 2017 Shingle 22j Biennale at Anzio and Nettuno, Italy.

Ishmael won his first poetry prize at age 18 through the San Diego Unified School District. He has won awards from the University of San Diego, the San Diego Public Library, and the 101 Encinitas Artist Colony.

FROM A CITY CALLED SAN DIEGO: A Projection Poem by Ishmael von Heidrick-Barnes