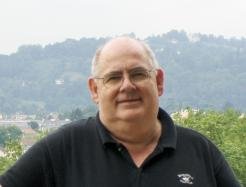 Gary C. King is a freelance author and lecturer who has published more than 400 articles in true crime magazines in the United States, Canada, and the United Kingdom. He is also the author of several true crime books including: Blood Lust: Portrait of a Serial Sex Killer, Driven to Kill, Web of Deceit, Blind Rage, Savage Vengeance (with Don Lasseter), An Early Grave, The Texas 7, Murder in Hollywood, Angels of Death, Stolen in the Night, and Love, Lies, and Murder. An Almost Perfect Murder will be published in September 2008. He is currently working on a book about Robert “Willie” Pickton, the Canadian pig farmer turned serial murderer, for publication in 2009.

Driven to Kill, the story of serial child killer Westley Allan Dodd's killing spree, was nominated for an Anthony Award in the Best True Crime Book category at Bouchercon 25.

King also writes the Bizarre Crime of the Week blog for Investigation Discovery, which can be viewed online at: http://discovery.blogs.com/bizarre .

King is hopeful that some or all of his books will be picked up by publishers in the U.K.

What I'm reading now:
The Monster of Florence by Douglas Preston with Mario Spezi, The Folio Book of Historical Mysteries by Selected, Edited & Introduced by Ian Pindar, The Castle in the Forest by Norman Mailer

Gives readings:
Yes
Travels for readings:
Yes
Identifies as:
White
Prefers to work with:
Adults
Fluent in:
English
Born in:
Farmington
Raised in:
Farmington, MO
Missouri
Please note: All information in the Directory is provided by the listed writers or their representatives.
Last update: Aug 05, 2012
X