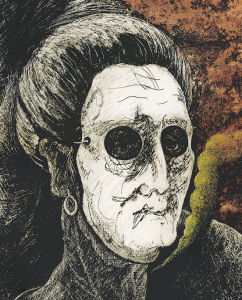 Ellen Peckham, visual artist, poet and memoirist, was born in Rochester, NY in 1938.  She frequently uses both art forms in a single work, the text decorating and explicating, the image illuminating.

Examples of her work can be seen in her book, Arrested Ephemera: Haiga, featuring 66 full-color, full-page illustrations and 45 haiku published by Paper Crown Press (2015); in the 12-page spread in Carrier Pigeon (2012); and in the 85-page catalog for her solo exhibition, Continuum: The Art of Ellen Peckham (2012), which includes texts and a CD of settings of her poems by Gerald Busky.  Her drafts, edits, publications, original sketches and prints are collected in the archives of the Doubly Gifted Collection at the Ransom Center for the Humanities, University of Texas, Austin. She has read across the US and at Shakespeare & Company in Paris, at the Poetry Café, and at The Old Operating Theatre in London.

In 2009, she was invited by the Instituto Peruano Norteamericano in Lima, Peru, to hold a solo exhibition and conduct readings in Spanish and English of her poems published for the occasion in the illustrated bi-lingual Recording Loss/Registro de una Pérdida.  Readings with video from Lima were organized in Arequipa and Trujillo by The American Embassy.

Both poetry and images have been widely published in the United States in, to name a few, The Christian Science Monitor, The Literary Review, Penumbra, The Atlanta Review, The Spoon River Review,  The Comstock Review, in anthologies including The Widow’s Handbook with an introduction by Ruth Bader Ginsburg (2014), in three volumes of Juxta (2015, 2016, 2017) The Haiku Foundation’s scholarly journals and, in 2017, Like Light from Bright Hills Press.  She has also been published and/or exhibited in Canada, Japan, India, Switzerland, Germany and Great Britain.

Videos from various readings and a 7-minute biography Parallel Vocabularies are available on her website www.ellenpeckham.com.

Gives readings:
Yes
Travels for readings:
Yes
Fluent in:
Spanish
Born in:
Rochester, NY
New York
Please note: All information in the Directory is provided by the listed writers or their representatives.
Last update: Sep 26, 2019
X