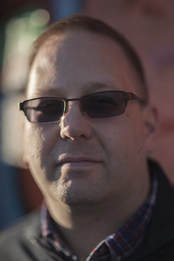 Chad Parenteau was born in Woonsocket Rhode Island in 1973 and grew up in  Bellingham, Massachusetts. Graduating high school in 1991, he entered  Framingham State College (Now Framingham State University) and majored in  English. He learned poetry and prose writing from instructors such as Alan  Feldman and Miriam Levine and studied journalism under Desmond McCarthy. Volunteering for the college newspaper The Gatepost, he wrote articles, columns, and comic strips, serving  his Junior and Senior years as Comics Editor and Living/Arts Editor respectively.

Moving to Boston in 1995, he obtained his MFA at Emerson College, studying with Bill Knott, Gail Mazur and John Skoyles. His involvement in the small press  continued, publishing poetry in Meanie and Shampoo and profile pieces for Lollipop, Comics Interpreter and Whats Up. He was also an early contributor to Boston's Weekly Dig, focusing on artistic and activist groups and reporting as one of a the few print journalists present for the events during and after the 2000 presidential debate at UMass Boston.

In 2003, Chad self-published his first chapbook, Self-Portrait In Fire (based on his MFA thesis) and won a Cambridge Poetry  Award. He continues to appear in numerous print and online publications, including anthologies such as French Connections: A Gathering of Franco-American Poets. In 2007, his poem "Moonlighting" was on display at Boston City Hall as part of The Mayor's Prose and Poetry Program. 2008 saw the publication of his third chapbook, Discarded: Poems for My Apartments from Červená Barva Press. In 2011, a catalog of his work was added to Framingham State University's Alumni Collection at the Henry Whittemore Library. Recently, his light verse has appeared in such venues as Salon. His first full-length collection, Patron Emeritus, was released in June 2013 from FootHills Publishing.

Chad has featured in several venues, including Spoken Word Nantucket, the Fox Chase Reading Series in Philadelphia, the 17 Poets! Reading Series in New Orleans, the Brownstone Poets series in Brooklyn and the Out of The Blue Art Gallery in Cambridge, Massachusetts. He is the current host and organizer of Stone Soup Poetry, one of the longest-running weekly poetry venues in the state.

His contributions to the reading series include creating and editing its online tribute journal, Spoonful and releasing a limited series of print chapbooks currently available through the venue. Most recently, he has partnered up Stone Soup with Jason Wright's Oddball Magazine, where he currently serves as Associate Editor.

Gives readings:
Yes
Travels for readings:
Yes
Identifies as:
American
Prefers to work with:
Any
Born in:
Woonsocket, RI
Rhode Island
Raised in:
Bellingham, MA
Massachusetts
Please note: All information in the Directory is provided by the listed writers or their representatives.
Last update: Sep 13, 2019
X